Filmed and Edited by Eric Bahlman.

Eric Bahlman chose to return to the basics, dust off his Sony Hi-8 camera, and have some fun with his friends. Over the last six months he worked on this project and collecting footage at home in Arizona along with on the road in Texas and California. Features Shadow / Volume rider Eric Bahlman himself, along with Broc Raiford, Simone Barraco, Loofa, Ryan Chadwick, Drew Hosselton and more.

A bit of insight from the man behind the project via RideBMX:

"Hi-8 is a project I started this last summer using my old Sony TRV-608 camcorder. I dug it out of storage and brought her out in the streets again to film my friends just like we did back in our high school days. Just us out riding bikes and having fun!

I've always been a filmer since I first started riding. But over the years I'd watch Ryan Chadwick and Bobby Kanode edit their own work while also helping them to critique it, so I figured I had gained enough knowledge that I'd give it a shot myself. Watching my old footage from back in high school and seeing the Baco documentary really sparked something for me. I wanted to capture that nostalgic home movie feel of you and your friends in their day to day going out to ride and having fun. Just raw footage, not like one of those big budget productions with glide cams, drones, special effects etc.

A sequel is already in the works. Maybe just another edit or maybe work a little bit longer to make a full length? Time will tell..." - Eric Bahlman 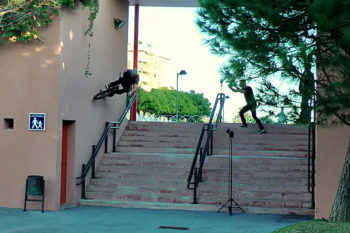 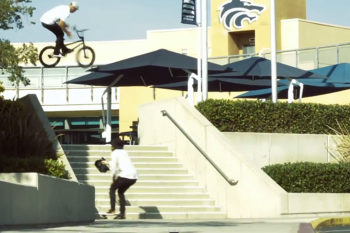 Biz's signature freecoaster is put to serious use...