You may have seen the likes of Miki Fleck and Nico Badet grinding the shit out of their bottom bracket over the past year and thought, "How the hell do they not go through frames weekly?!". The answer? The BB Buddy.

BB guards aren't a new thing, but nothing has come close to this in simplicity and functionality. Sometimes the simplest ideas are the best. We caught up with BB Buddy daddy Ben 'Bomber' Counter to find out more...

How did the BB Buddy come about? Was it a lightbulb moment?

The original idea came towards the end of my stint in the BMX industry (sales and occasional spitballer of ideas for 4Down Distribution/United). I saw guys like Miki (Fleck) who literally treat their bikes like skateboards, grinding any part of the bike that works. It’s just stupid simple. If you’re gonna grind on your BB shell long enough, you’re gonna fuck your bike sooner or later. Making the non-drive crank spacer out of a harder material with a bigger diameter and thicker (whilst maintaining the original overall length) just seemed logical. Around the same time, I saw Matt Beringer had done something similar albeit a more flush design and made of Titanium. The idea took a bit of a back burner from there up until when I had set up a new frame a few years later. The frame came with a straight gauge bottom bracket shell, differing from the stepped BB on the frame I’d used prior. I must of ate shit pretty bad at least 10 times that day trying Derek Dusters down rails. It just wouldn’t lock in. That was my come to Jesus moment for sure right there. I thought if this isn’t on the market, I’m just going to go ahead and make it myself. A few messages to Beringer later and the green light was on. The name also has a funny meaning to it. A lot of my home town crew have called me Buddy for years. Me and Foo (being the twerps we are) randomly stutter words in a moronic drill tone to each other - that’s where B-b-b-b-b-buddy comes from (laughs).

What was the process like getting these from your brain into production?

I started machining when I was 17 purely for the fact I wanted to make bike parts, but hadn't made a single one until now. 20 years later, with a drawing on a scrap piece of paper and a CNC machine shop at my fingertips, samples were made in a few days.

How easy are these to fit? Do they work with any cranks?

Just whip off your crank arm, make waste of the old spacer and slide the BB Buddy on. It’s that simple. The only issue I’ve seen is where people have already been grinding their BB shell to shit and there’s some rubbing where their shell is burred over. In that case either break out the file or bung a thin spacer between your BB and BB Buddy. Just don’t come at me with any warranties (laughs). As long as you’ve got either a 19, 22 or 24mm spindle, you’re all good to grind like fuck!

They’re made in Hastings at the machine shop where I work. We’re a subcontractor so we’ve made everything that comes through the door from anti-snoring devices, gyroscopes and dummy bullets for war reenactment companies. The BB Buddy is made from post-hardened 4140 chromoly and programmed and processed via CNC by my own hand.

The only process I’m not involved in is when they get sent away for post hardening and blacking. From there they’re degreased, packaged and despatched by me. That’s not to say this has purely been a one-man-band project. I’ve had Fooey volunteer to shoot the images and create the animation. Jordan Godwin doing a standup job with the logo design. My wife Chloe setting up all the web-store and admin side of things and Alex V sharing his years of knowledge of creating and maintaining BMX projects with me. Super lucky to have that crew to hand - 100%.

Who’s been testing these for you so far?

A bunch of bros, dawgs and homies. Miki and Nico (Badet) instantly came to mind. They’re pretty much at the forefront of doing grinds whilst not using pegs. I’d hung out with them a few times before when I was at 4Down so I knew that they‘d be down. Gaz Docker and Nathan Goring, I don’t know too well but I could already tell they’re sick lads and I just like the way they ride. Gaz with his out-of-the-box approach to riding and Goring with his classic full throttle style. Alex Valentino and Fooman, they’re just 2 of my best buds so they didn’t have a choice in the matter (laughs). I just sent one to Rory Mclean who I’ve never met, but watching his videos I knew that he would do some banging stuff on it, he proved me right. Also Jordan Okane. Around 4 months after giving him one and he still hasn’t put it on the prick! (Laughs)

I’ve been getting messages from guys saying “how about you make some pegs?” Or “how about a stem”. The way I see it is there’s tons of sick parts on the market already for whatever sub genre of BMX you’re into. Want some pegs? Get some Metal Miki Pegs, want a stem? Get an S&M one. Support the brands that do cool shit. But if you need a fifth peg and wanna grind like fuck hit me up! 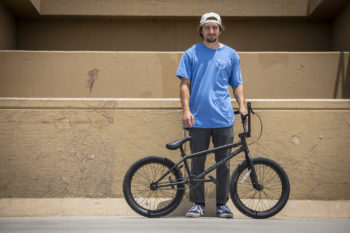 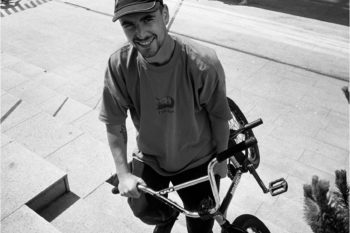 Scratching beneath the surface in Tallinn