When is a spot not a spot? Probably when it's somewhere that a local brings her donkey for a drink.

Usually when you’re a freelance photographer in the BMX business, January is a pretty chill time, unless you live in Cali of course. So, as usual I had nothing to do... until I got a surprise email from Luc Legrand. This was definitely something that I didn't expect as Luc doesn’t really use any social media - he's kind of a modern day hippie. Anyhow, I was psyched - Morocco for a couple weeks would be rad, and we'd also got to meet up with another hippy, Anto Lille. We live in the same city but he’s hard to catch up with. It was an adventure just to plan this trip. Luckily Anto had just finished his school project and really wanted to ride. So all of a sudden we booked our last minute trip for the BSD French contingent and looked forward to taking in some sun in Africa

Cruising la Medina in Marrakech. We would have rocked the Casbah if we could've found it.

If you decline to eat meat in Morocco you are considered to be impolite. That’s us screwed then… Anto cruisin’ the Souk in Marrakech.

Check the quality of my babouche my friend.

Luc picked us up at Marrakech airport and we took the road at sunset to Agadir beside the Atlantic coast. On paper the drive was quick and the road straight, but when you’re in Africa it can get a bit more complicated; there’s not many rules on the roads. Of course you can ride with your whole family on a moped or drive a truck overflowing with various objects. There are also a large variety of animals so you have to be careful when you arrive at your destination. We ended our day in Agadir and meet up with Antoine Soubourin (filmer) at the main plaza who was looking for places to stay. For three days we stayed in the seaside town, which reminds me of the Canary Islands (which isn’t far away) – it was super chilled and we just enjoyed cruising around. Everybody was nice and we were a bit surprised but Morocco is a super safe place, even if sometimes it looks sketchier than a French ghetto. Of course every local came up to us and tried to sell us various things, especially Hashish, but nobody in the crew was smoking. In fact, it was really cool to be on a smoke free trip. It was also an alcohol free trip too as it’s a Muslim country and it was not so easy to get. Instead, we really enjoyed the local food like Tajine or Couscous and the fresh fruit juices pressed in front of us. The avocado with dried fruit was so good. Needless to say, everybody was fresh in the morning.

Soccer’s not all that bad. Luc making the most of the DIG editor’s dream spot.

Apart from eating we managed to pedal around, and that little town has a bunch of spots to offer. It’s probably one of the only cities that has two skateparks, but we managed to avoid them- we’re not German and we prefer to find weird stuff. I really enjoyed being with Luc and Anto because they definitely had a different view on street spots than other people, and having them on the same trip was a treat. We met up with the locals too, some of them took the train or drove just to meet up and ride with Luc and Anto. The local guys were so motivated, especially Zougha. He took some really bad crashes but made it happen in the end. He didn’t care that his bike was a piece of shit and just shredded everything he could.

"They were really pissed off - they started throwing rocks and wanted to fight with a wooden stick."

Zougha, the local shredder from Agadir.

Zougha - nollie 180 on the main plaza in Agadir.

Just about one minute from where we stayed there was a building with a crazy rooftop with a bunch of vertical half-pipes linked like a spine. It was just amazing, but not rideable. We went in and met up with the boss of the area (it’s a center for hand crafts) and began to do what the locals love best: negotiation. We explained the BMX stuff and mentioned we wanted to take some pictures of the roof. The guy was like “Ohhh, ok you can take pictures.” It was too good to be true but he didn’t realize we wanted to climb up with the bikes, so our plans were cancelled. But Zougha and Noufal (another local from Casablanca) managed to go at night and talked to the security. I’m not sure what the plan was but when we went there again it was a bit sketchy and pitch black. We waited for about ten minutes and then started to climb up. It was noisy as fuck, you can imagine all the people outside around 23:00 watching the scene of white European kids on their bikes trying to ride a roof. We were up there less than a minute until some dudes arrived screaming like crazy with their lonnnnng long beards. They were really pissed off and they started throwing rocks and wanting to fight with a wooden stick. After a one minute sesh for Luc to do two carves, he was like, “Ohhhhhh damn it was perfect!” After the quick run it was time for a mint tea called Whiskey Berbere.

Did you know, the movie “Casablanca” was not filmed in Casablanca, Morocco. Not even one scene. Thought not. Anto and another hood rat with a weird gap in the middle of nowhere… or was it?

After this lovely experience we decided to stay one more day and Luc wanted to ride the local ditch. So we hit the spot, and Luc started looking at a full speed blind gap. Why not? There are some walkways around the beach that gave a perfect run up straight to the concrete, and then you can hit a wall that is really far away. All of a sudden Luc gapped the thing without telling us to shoot it. WTF! But he wanted to do a line so he ended up doing the gap five or six times. So scary but Luc seemed to really enjoy it. So much control and I think it was a new way to ride this place (maybe not for Dennis Enarson if he where here).

After three days it was time to leave Agadir and get a bit more flavor of adventure driving along the coast to surf and camp, unfortunately though the weather was not the best. We were lucky to find a nice spot to set up the hammock and enjoy the stars. The next day was dedicated to surfing. The spot was really in the middle of nowhere, just desert, no trees. Only a couple of Americans or Australians went by with a wave. And in this nothingness there were a bunch of kids who would come to panhandle all the tourists. I imagine that those kids don’t go to school and just wander in this desert. Oh, one other funny thing is that Morocco is an old French colony, so everybody speaks French fluently and that proved a big help.

Souk it up. Luc and a blind full speed gap from a small curb.

After a good morning at this place we took the road again and tried to hit the Paradise Valley into the mountains. It’s supposed to be a wonderful place with waterfalls but the weather began to get really bad and I think we took a wrong turn. We ended up driving into the mountains and there was nothing except for people walking along the road. It would seriously take days or weeks walking anywhere there. We drove for hours and hours on a really small road, sometimes full of mud. We stopped at some point when we saw a village (three houses, kinda) and something that can be considered a spot- some fountains made with concrete and a pile of mud that Anto could gap into. What a weird situation. At the same time some local girls were bringing back a herd of goats but were a bit frightened by us… and then it started raining again. We journeyed down the road until we finally hit Marrakech again and tried to ride some street.

Luc with a cancan at the dirty Marrakech ditch. Some frightened Police came over and kicked us out as we were causing a crowd to form on the main road.

Finally back to civilization, we stayed at Moshine’s parents, a young local that Luc and Antoine met up with before Anto arrived. Moroccan people are really welcoming and they prepared fish tajines and tea for us. It was too good. Marrakech is really famous for its Souk [open-air market]. We went straight to it and went through all those small streets and stores. I needed to go. Luc really enjoyed knocking on people’s doors and going in to have a chat. He likes to discuss the price of everything. It was really funny and some dude tried to negotiate a price for our bikes against camels. It was too funny! It was just a good experience to discover another culture – and it was a nice change not partying on a trip and drinking tea instead.

The crew checking out some Saharan clips.

"We were fortunate to find a nice spot to set up the hammock and enjoy the stars. The next day was dedicated to surfing." 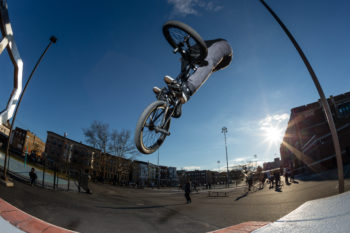 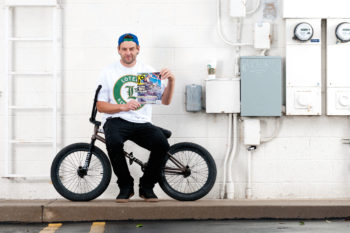