Named as an ode to Wayne's World(wait for hilarious extras at the end), Pete Greaves has dubbed a trick he believes to be the first landed as the "schwing." 10,000 attempts is a pretty astronomical number, but with it taking many years to land perhaps it's not inaccurate. While the "schwing" is the highlight of the video, the DIY park session that leads up to it is no slouch either, Pete even pulls out the rare 180 x-ride.

"This is basically an hastily cobbled together edit to celebrate conquering my nemesis trick. I’ve been trying it on and off for over three years, regularly putting in over an hour a week attempting to nail it. Basically a flatlanderesque level of time dedicated to learning a flatlandesque grind! Also, “learnt” is maybe a bit strong for a trick that I have pulled once in an estimated 10,000 tries…

I’m pretty sure its new so I’m calling naming rights. The trick is called a “Schwing” after the sexist groin thrusting motion from Wayne’s Word. Other names that were considered but rejected by the focus groups:
Croque Monsieur
The Hot Stepper
Chaffinch
Trial by Pegs
The Ordeal" - Pete Greaves 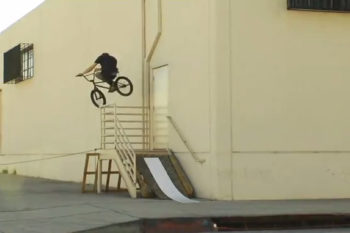 DBG is a beast 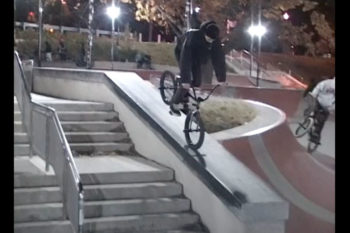