The good kind of crazy

Chris Childs is a madman.  This just might be our favorite section from Sunday's 'Grow Up' DVD!  Catch the rest in our related content section below...

"Shooting with Chris Childs can be a harrowing experience. Chris pedals fast, jumps far, airs high, grinds big… there’s plenty of potential for catastrophe, but I get the sense I’m usually more concerned than he is.

The word “casual” gets thrown around a lot when describing highly-skilled bike riders, but Chris is the poster boy for casual. Chris routinely fires out the craziest shit like it’s nothing; I’ve never seen anything like it. Even after years of filming with him, I’m still taken aback by the caliber of the stunts he’s dreaming up, and perhaps even more so by his carefree attitude towards them. For the incredible amount of risk Chris is taking, he’s cool as a cucumber.

With Chris there are usually no run ups and no second tries. Even on the rare occasion he’s actually sweating something, more often than not it’s one and done. The last five tricks in his part were all first try. That’s unheard of.

You see, Chris may send wild moves on the reg, but he’s no hucker. To the contrary, Chris thinks through everything he does, and if he calls something out you know it’s been fully analyzed and deemed within his capabilities. When you’re messing with as much speed, distance, and gravity as Chris is, you can’t be rolling the dice.

Aside from its sheer magnitude, the other striking thing about Chris’s riding is its diversity. Chris can do it all – the biggest gaps, drops, wallrides, and rails, put together a flat ledge line, trick every jump at the trails, flow a ramp like it’s nobody’s business – Chris feels at home on all terrains and at all speeds, even if his preferred mode is hauling ass.

But to me, the best thing about watching Chris ride is that as calculated and dialed as he may be, he pushes it to the limit and sits right on the line between in control and total disaster. His riding has a certain looseness to it that keeps you on the edge of your seat and just a little bit scared for his life. It’s that little bobble, that extra bit of seemingly accidental kickout that gives his riding so much character and makes it so goddamn entertaining.

And, Chris is a true renaissance man. When not effortlessly dominating his bicycle, he spends his time making music, painting, filming and editing BCAVE videos, and enjoying a whole slew of other creative interests that keep his mind productive. He’s also a solid dude and one of the most easygoing people you could ever hope to travel with, and while I don’t have any actual tallies, he probably spent more time on the road filming for Grow Up than anybody else. Watching his part, it’s easy to see that dedication.

Chris has an immense amount of control over his bike that, combined with his innate fearlessness and abundant creativity, makes him capable of just about anything. So sit back, relax, and enjoy Chris’s part, and don’t worry, he (mostly) made it through just fine. 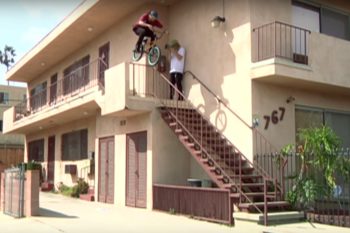 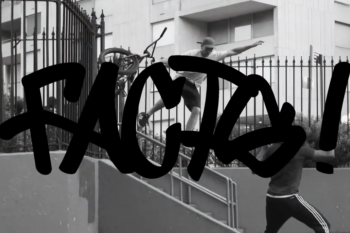