Words and photos by Fred Murray / Videos by Dave Sowerby

If you had told me fifteen years ago that we would have the choice of a frame with a 12.5" backend, I would have believed you, but I probably would have written it off as a gimmick. The problem with that thinking is Alex Donnachie had only been on the planet six years and I don't recall seeing anyone doing oppo hang tooth to crankarm to backwards crook indian back then… No matter what your take on it is, it's undeniable that Alex has become one of the most innovative street riders in the world, and when he does all that on such an extreme set of dimensions, you've got to sit up and listen. There's no doubt that the new BSD ALVX frame along with Ben Lewis' signature FIT frame will have a big impact on the shape of what's to come, so we caught up with Alex to take a closer look at his idea of a tight setup. While we're at it we also have a behind-the-scenes look from the filming of his epic 'ALVX' video that we premiered last week.

Casual as you like, this over-smith to ice didn't seem to cause Alex any stress whatsoever. Mind over matter I guess? Another DX manoeuvre to add to the already insane trick list that this rail has accumulated. Photo by Fred Murray

I'm good. Just in Hall One right now, trying to make my way out.

Where you going now?

I'm in Hall Two (Unit 23 Skatepark)… well that was the plan anyway and then you called me, but i'll make a stop in the office for this business call.

Thank you, it's pretty serious stuff we need to talk about… Right, what's up with the ALVX and its mad short back end?

Well, that was my doing. A few years ago Ben Lewis' signature frame with FIT came out and it had a really short back end and was just a super small frame. One of my friends got one, I tried it and it felt so good to ride. I rode the BSD WZA at the time because it had a short back end, so I thought if you make it even shorter it will be even better. That's how that happened. It makes everything so much easier. It just makes sense.

How about the head tube, is that steeper than the WZA?

How did you fit those big tyres in there?

Well, Grant Smith is the designer so he figured that one out. He made the tubing more oval so it can curve a bit more and fit in the 28 tooth chainring and 2.4 tyres with a bent wheel without rubbing. (Laughter)

What about your frame history. Have you always ridden short frames?

Well, i've always run a pretty short top tube… I'm not really a massive guy, ya know (laughter). It's pretty much always been 20.6, at least for the last three or four years now.

So what sizes does the ALVX come in?

(Long pause) Uhh, if you look at bsdforever.com you'll find all the available sizes you need. (laughter)

Nice one. Who was in charge of the graphics?

The graphics were mostly down to Dave Sowerby. He usually comes up with some ideas along with myself, put it all together, and the end result is what you see. I really couldn't be any happier with how they came out.

Yeah, I mean the only thing I like doing aside from riding is filming. I've had a VX for seven years now so it just seemed right.

Where are the weed and alcohol references?

Haha, probably no LOLweed references on this one for a good few years to come I think.

What can we expect on the 2025 signature frame? Will much change in ten years?

Who knows, but there's been many rumours of gyro tabs… (laughter)

Behind-the-scenes on the making of the ALVX video... - More Info

Despite a multitude of punctures and an increasingly hungry group of humans just out of shot behind, Alex was determined to get this switch hard 3 in the bag before we made our way back to the apartment. Needless to say, ya man focussed his mind and added another element to his vast caboodle of abilities.

Just across the river from Dan Lacey's ice ledge, this ledge was exactly the same just flipped the other way. Perfect for Alex's tyre ride to 180. Want some 180 with your tuck?

Morning warm-up spot and a casual duck down nose manual under the tree branches. On an unrelated subject, fuck the passive aggressive woman who desperately wanted to talk to us at this spot but couldn't take it when no one was interested.

The end of what was already a complicated line. That tight frame paying off on this one?

The only video you need to watch today! - More Info 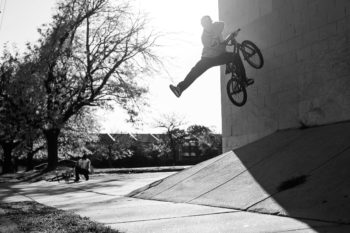 “It pretty much takes my favorite part of riding right out.” 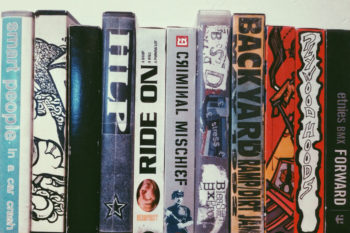 Where's The Love? The Disposable Age of BMX