"A WAKE UP CALL IS SOUNDING"

The brutal killing of American George Floyd in Minneapolis has shocked the world and invoked a response against racism and police brutality on a scale that has never been seen before.

Most of the BMX world was initially slow to react (ourselves included), but what followed was an unheard of show of solidarity against racism with a large number of core brands and pro riders supporting the #blackouttuesday instagram protest and many, including most notably Mat Hoffman, took to the streets to make their voices heard. Madera moved to remove their TM in response to this post by Sean Morr, and DK Bicycles announced that they’d be stopping production of their controversial 'General Lee' frame. Elsewhere various riders have been vocal in sharing their all too often unheard experiences as black BMX riders.

Whilst the response from our greater BMX community has been largely positive and supportive, there have unfortunately been some openly racist riders crawling out from under their rocks on social media, alongside the typical white privilege brigade who don’t see it as a big deal because it’s not something they personally have to deal with.

To give you a sense of the scale of the issue within BMX online, here at DIG we lost over 600 Instagram followers simply for posting our support and solidarity against racism. It's a tiny percentage of our overall following - but still a depressing amount people - and whereas on one hand it’s 'good riddance' of course, but on the other hand we’d much rather be able to keep talking to those people and keep sharing an anti racist message - especially where younger riders are concerned.

Sharing that message and engaging with and supporting the issue, is something we all can and should do and the BMX community needs to continue to pull together on this.

Right across the world, a huge number of BMX riders still face discrimination daily both on and off their bikes, purely because of the colour of their skin. And that’s fucked up. This isn’t the time for BMX to stop talking about racism. This isn’t the time for BMX to stop calling out racism. It’s never the time. Now, more than ever, this is the time to give a fuck. We all need to do better and now more than ever we need to learn and we need to listen: Listen to black riders - listen to your black friends and their families (whenever they want to share of course), and get a greater understanding of your own privilege.

Above all though, please educate yourself on this issue as much as you can. It's not up to anyone else to do it for you. You can find out more about BLACK LIVES MATTER here and this document bit.ly/ANTIRACISMRESOURCES is a great resource for learning.

All signed poster proceeds will be donated to BLM. Link in profile. #blacklivesmatter 📸 @blabacphoto

I need to get this off my chest. I have NO police record and have been pressed up against fences/walls/police car hoods and searched too many times to count. Embarrassed and laughed at in an attempt to make me slip up. Had guns drawn on me while I laid on the ground. Told I was under arrest and put in the back of cop cars only to be let go later with no explanation more than once. They’ve set up 1000s of dollars of tickets and made go me defend myself in court more than once. The list is endless.⠀ ⠀ I only bring this stuff up to try to give perspective why this movement hits hard for us. This isn’t only about George Floyd(RIP), this has been going on. It’s not about change, we’ve tried that. It’s about being heard and standing up to a broken system that has been bullying and oppressing us. I’ve gone out every night because I wanted to see for myself what was going on. It made me so proud to see young people coming together and organizing to stand up and make them feel us. It also solidified the system isn’t about about doing the right thing or upholding a moral code or the law (they changed that up with the curfew). I watched the police drive by and watch the jewelry district being looted by a couple kids. Same thing in Melrose. Then they open fire with tear gas and rubber bullets on protesters just marching down the street.⠀ ⠀ Four nights I’ve laid in bed hearing sirens and helicopters knowing that they are going to fuck up and arrest more people in the movement. After they started shooting at everyone yesterday, it has felt like we are losing. And it feels horrible. It stings a little bit seeing brands jumping on the bandwagon now or seeing influencers explaining this isn’t about looting like they get it, or even some of the white protesters screaming in the cops face when we are just chillin. I understand the intention is there but it’s very real for us. If you didn’t go down there and stay down there when shit popped off to see what this was really about. Please show your support of the movement/George Floyd and tell us you’re with us and keep it pushing. Please leave the commentary and explanations out of it ✊🏿

We The People: First Amendment Rights! . “Congress shall make no law respecting an establishment of religion, or prohibiting the free exercise thereof; or abridging the freedom of speech, or of the press; or the right of the people peaceably to assemble, and to petition the government for a redress of grievances”... . #changestartswithknowledge #constitutionalrights #strength #freedom #photojournalism #LA #california #losangeles #cityhall #downtownlosangeles #believeinchange #photography #nikon #equalrights #protest #marchforourlives #blacklivesmatter #blmla

Thank you! I’ve been signing posters for hours!!! And your donations keep pouring in. This is Amazing. I’m working hard to get your orders out. I just ran out of the envelopes I mail these posters in, but more are on there way. I’ll get everything out ASAP, but be patient. Thank you. America and the world will forever be indebted to black culture. I’ll show what we raised and donated to #blacklifesmatter soon. One Love. Fuck Racism. Thank You. Swipe for some other perspectives of this Amazing ramp, dreamed up by @dannyway, that I got to ride back in 2015. Peace love BMX

A wake-up call is sounding in America. We’ve heard it loud and clear. BMX is a small space. There’s no room for racism. There is no perfect right thing to say. But there’s clearly a right thing to do. Effective today DK is discontinuing all General Lee model bikes. We won’t stop listening and learning. Thanks for sounding the alarm. 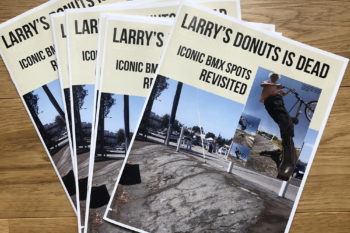 LARRY'S DONUTS IS DEAD - Now On The DIG Store 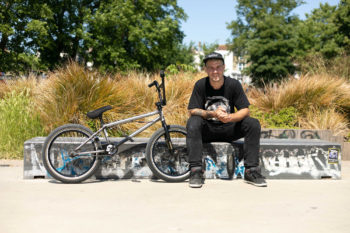