“Chick-a-dee-dee-dee-dee,” a black-capped chickadee chirps to its nearby companion. Horses quietly chew tender blades of grass. A light breeze ripples through crisp leaves. The sound of a roaring cassette hub emerges, quickly breaking through the relative silence. Tires buzz up a wooden transition and eventually reach loosely screwed coping. Ting. Lift off. Float. Tunk. These are the sounds of the prairies.

“Honk,” a car horn blares. Engines idle impatiently. Pedestrians shuffle down the sidewalk. Nondescript chatter is heard amongst acquaintances, but not a word is spoken between strangers. Pegs scrape against a ledge. Tires thud onto concrete. A squeak is heard from a quick revert. Cheers are followed by laughter. These are the sounds of the city.

In the late spring of 2017, one of these worlds replaced the other. I became a statistic; I transitioned from rural to urban life. Despite being the second largest country on Earth by landmass, a massive majority of Canada’s population is concentrated in select urban areas. Approximately 83% of Canadians live in an urban area. My own transition took me from the prairies of rural Alberta to the heart of Alberta’s capital city, Edmonton.

From the prairies to the city - More Info

I would say the most notable change I’ve experienced is related to the idea of “community.” I didn’t belong to a local BMX community when I was a young kid out on the acreage. For reasons of geographic isolation and a lack of four-wheeled mobility, there weren’t people to ride with. Nonetheless, I have fond memories of that period. Digging dirt jumps in the backyard, building ramps with my father, self-filming, and occasionally riding with my brother were some of the best parts of my childhood. I wasn’t connected to a local scene, but I still loved BMX. My mental image of a BMX scene was shaped by crew and company DVDs, and scene reports in magazines. Although I didn’t fully grasp what a BMX community was back then, I knew I wanted to be a part of one.

Today, I find myself immersed in the Edmonton BMX community. Friendships have grown, and group sessions have become a regular occurrence. The Edmonton BMX scene is filled with eclectic characters and talented riders. However, over the years, the scene as a whole has become fragmented. We’ve had indoor parks come and go. Our core shop, Transition BMX closed its doors after 13 years in business. The renewal in young riders is not at all what it once was, and the experienced riders tend to do their own thing. It’s quite common to ride the same spots or parks with the same people. Integration or overlap is limited unless someone hosts a jam or contest.

Since I’ve moved to Edmonton, my friends and I have been putting in more effort to bring the BMX community back together. One of the instruments we’ve been using to do that is a DVD project. The first Weird & Revered full-length DVD will become something of an Edmonton scene video. We’ve been riding with various people throughout the city to stack clips and make this project a community effort (Side Note: Hit me up if you want to be a part of it). While out cruising and filming for the DVD, I also managed to collect enough personal footage for this short “Citified” video. The word, “citified,” represents my transition from rural to urban life. My country roots are still deep, and I can’t see myself living in Edmonton forever, but for now this is home…. I, Justin Schwanke, am officially citified. 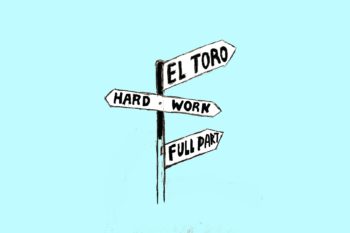 OPINIONATED: El Toro - The Gateway To What?

What has this spot become?