Anyone who's a longtime friend, co-worker, and/ or travel companion of Salt Lake City legend Shawn “Elf" Walters knows he has a special affinity for playing pranks on his friends around his hometown and beyond. These are the things legends are made of. Elf blessed me with five of the favorite ones he's been able to pull off:

“I have always enjoyed messing around and playing jokes on my friends as long as I can remember. I have found myself many times going to extreme lengths to accomplish a simple laugh. Maybe it stems from my childhood; the kids in my neighborhood would paint your whole bike another color, including the tires, if you did not keep an eye on it. If you got mad, they would either try to beat you up or make fun of you so bad, that you would learn not to care. Or maybe I got it from my dad, who used to give me a bowl of butter and tell me it was ice cream when I was little. I've done this stupid shit to people for so long, I don't even really remember most of them. Here are a few that stand out."

It was seven or eight years ago. I had a book of UPS door notices, and I would always fill them out and put them on people's doors to make them think they got a package. Everyone always got a good laugh out of it. One time I decided to do it to Matt Beringer. I always try to think of something that someone would anticipate getting, so for Matt I wrote it was from S&M, and it was for the second or third delivery attempt, and what time the delivery would be the next day. A couple of days later I came back and talked to his roommate Justin, and asked what happened. He told me Matt found the notice on the ground in front of the door the next morning; it must have fallen off the door. Instead of going snowboarding like Matt had planned, he sat around all day waiting for the package. After most of the day went by and nothing showed up, he called S&M, and they told him they never sent him anything. Then he called UPS, and they told him the tracking number didn't exist. Justin said Matt came up with a theory that when he took out a bunch of boxes to the trash, an old notice fell off one of the boxes, it was from the exact day and month from the previous year. It went way further than I could have ever imagined. I haven't told Matt yet, but he will know now. Hopefully he doesn't get that upset about it and finds it funny, now that's it's been so long.

2: Ben In The Closet

I was with my friend Ben at a coffee shop, and there was a gay culture magazine. I grabbed one and threw it under his car seat, thinking he'll find it and maybe weird-ed out by it. So a week or so goes by, and I get a call from Ben, and he asked if I put gay porn in his car. I told him no, thought about it, and told him what I did put under the seat. What happened was Ben went out of town, and his girlfriend's dad wanted to be nice and cleaned out his car. He found it under the seat, and just jumped to all these conclusions. He called his daughter (Ben's girlfriend), told her he had something to tell her, but wouldn't say what. She eventually got him to say it, and he was basically insinuating that Ben was in the closet. She knew immediately it was a friend's joke, and they resolved it, for the most part. I told Ben that deep down, though, he's never going to believe him. Ben has it out for me on that one.

3: Riley and The V-Neck Cover Shoot

My friend Riley and I talk more shit to each other than to anyone else. He wears deep v-neck shirts all the time, and I give him shit for it all the time, even though I don't really care. The Albion mag came out to cover the Salt Lake scene. Steve Bancroft was coming into the Wood Shop, and I randomly had an idea to mess with Riley. I asked Steve to go along with it, and he was into it. When Riley came in, I told him that Steve wanted to shoot a cover photo of him wearing a deep-v, and they were going to put the Albion logo inside the v part. We even talked about him shaving the logo in his chest hair. I didn't go out with them that day or the next, but apparently Riley took a whole change of deep-v shirts with him, and Steve went along with it and shot a bunch of different portraits standing there, wearing a deep-v. Riley completely thought he was going to be on the cover. The magazine came out and he obviously didn't get on the cover, and Steve wrote about how it was me joking with him. I got him good with that one. He laughed it off; he's a good sport.

I always put tons of goat heads (which is a wild weed in Utah that has thorn-covered seeds, which causes flats to no end) in Tate Roskelley's car glove box. When he moved into his house, there weren't any growing in his yard. He's dead-set on believing that I'm the reason why his entire yard is infested with them now. He first thought that I purposely threw them around his yard and seeded themselves. I really didn't. What we've come up with is, when I put them in his car, and he cleaned it out, some seeds dropped, and they grow like wildfire. So even though I didn't mean to do it, I may be the reason why it's infested with them.

This might be my favorite. Anyone who knows Def Paul Bonner will too. During digging jobs, Fuzzy would hire some friends to help out. When were were in Portland for a job, Fuzzy hired Def Paul, who is one of the coolest, funnest humans to hang out with. Since the loss of most of his hearing, he has attained a great outlook and keeps things funny with jokes about himself, or just being a good sport. We were building a berm, so we were all nearby each other. Since Paul didn't have my number I just texted him. He replied, “Who is this?" I replied with a random girl's name. He had an ex-girlfriend with the same name from Salt Lake with the same area code, and then I luckily happened to guess her name. Light bulbs went off in my head with where I could take this joke to. He was directly beside me working on a berm, and would tell us everything about it, because he was in shock with what I was writing. It was too easy. I had him believing I was his ex-girlfriend from Salt Lake. I didn't know anything about this girl. She was this Mormon girl that he dated, and I was telling him she now lives in Portland and she was a stripper. At one point he wanted to go back to the hotel to hook up with her, since I was saying all this nasty stuff. Then I started texting that she wanted to hook up with his friends too. It went on for hours. At one point I texted him (she) wanted to have anal sex, and he wrote back, “Only if it's clean." I replied, “I just ate Mexican food." We all watched him receive the text, and the look on his face- his eyes were so big. He says,"this is soo weird." He repeated the entire text conversation to us, and we are dying laughing. This was hours and hours into it. He eventually figured it out that it was me. Even still to this day, just the words “Mexican food" is an inside joke between all of us. He's the greatest person about it, he just laughed it off.

Elf - Prank-free sprocket stall to hop-in with a manual out for a little added spice.

"I know I have it coming some day for all the pranks I have pulled." - Elf

I know I have it coming some day for all the pranks I have pulled. Def Paul told me one time in S.L.C. that when he got home, he wanted to start messing with his friends like I do. I replied, 'well you better watch your back then.' and he said, 'Yeah. everyone always wants to get you.' - ELF

Riley and one of those deep V-necks. Photo courtesy of Shawn Walters. 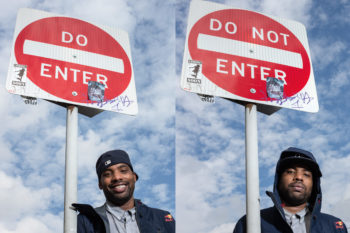 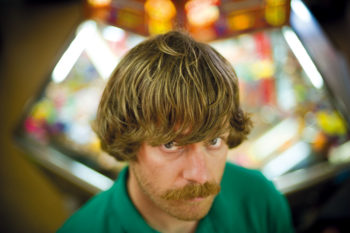 "How much better it could have been if I had full leathers and an Echo helmet."