And five favorite parts of his own...

Jake Seeley has been steadily putting out video parts for over a decade and a half now. With his latest in the freshly released Madera full-length “ABD” and upcoming Ight Hype tape, Sunday web part, and a yet to be announced mystery part, Jake continues to lay down some next level progressive tech moves on the streets.

We sat down with Jake and got some insight into five video parts that were pivotal moments for him, and some of the answers might surprise you. And as a bonus we also covered Jake’s five favorites of his own, which begins with his first video part ever in a local video from back in 2003.

"It was super-inspirational, because Neal’s riding stood out. The song goes with it so well; it was the first time I ever heard it, and it’s so relaxing and really compliments his riding. The tire ride crank flip was so ahead of its time. He was thinking a little outside of the box. The 180 over grind- this is what made me want to learn this trick so bad. Since I’m shit-footed, it’s a normal spin into it to over grind for me. He’s a really diverse rider- he could do all this really cool street stuff, and then also park."

"This part made me an Aaron Ross fan for life. It was the last part in the video. His part was Austin-based, and I was super into Austin. The song was super-wack; I definitely wasn’t into this type of music at all. He was super loose and had a way different style than I’d ever seen before. He changed the game with this. I always struggled with tailwhips, and I couldn’t believe how good he was at them. I think he’s shit-footed also. He definitely influenced a lot of his style into me. His ridiculously loud hub guard that always stood out to me. Probably at one point I tried to mimic that."

The beginning of many video sections for Mr. Ross... - More Info

"East Coast as fuck. I love how crusty what he rides. No matter how rough or shitty, if he sees a spot he’s stoked on he’s going to do something cool on it. It made me really appreciate East Coast spots. This song slaps. Homie does a pole jam to suicide. He does an Indian giver and it doesn’t matter at all; it’s his style. He rode a fence with barbed wire. He’s always creeping in a hoodie. He did a gap to tire ride in pitch black. His ender is something that no one has barely done since."

"This changed my whole riding style to what it is now. I got heavily influenced by it. I’m a bit older than him, and didn’t know much about him until five years ago. I’ve always been into super technical riding, and his part made doing a bunch of trick combos on a ledge look good. That was something no one could do with style; Alex introduced that to everyone. He was doing a lot of technical stuff that I’d never seen before. On top of that he’s dropping the heaviest clips; he’s not really scared of anything. I wish I could do more bigger stuff. It’s sick seeing him do it, and being a more technical rider and make it look good. Every clip is, “WTF? No way.” The song is amazing; though a song-jack from “Pretty Sweet” (skate vid)"

"This is my newest favorite part. I’ll go back and watch it quite often. His spot use is fucked. There’s a small amount of people that are really using spots to their full advantage. To me, that’s half the battle. Dak does it well. He hunts for spots on the regular. I think he has a similar process for filming a video part as I do. His riding is super influential to me, it’s always a treat to see. He’s one of my favorite riders right now. A lot of Dak’s past parts are more about how big the setups are. He still does the big shit. This part really shows his technical eye. It’s just what I’m into now. He’s not really doing a ton of barspins and whips; he’s literally just riding his bike on shit. His style is so fucking sick. He can get down on anything. He stays with what’s in right now, and does it his own way. His riding can continue to progress; he’s always doing something a step more in every video part."

Dakota Roche - CULT CREW "It's Later Than You Think"

Jake's Five Favorite Of His Own Video Parts

"(Before this) I watched video parts, but never made one. I had this homie Jason Morris, and he reached out to me and wanted to film a video part with me. He would come out my way, or I’d collect footage. He put it together. It was my first showcase of riding to the outside world. My riding is so different now. To see those tricks recorded and put together was pretty awesome and gratifying. I was still technical, but I rode brakes and no pegs on ramps. It was a similar type of riding as today, on different terrain. I was super stoked on that part. My favorite trick in there was tailwhip to pedal to fufanu 270. We filmed the whole video, and he was putting it out the following week. I went there, set up a tripod, and filmed it in 20-30 minutes. I got on AOL, and said, 'I got the clips!' I was 13 and in middle school."

The first section of many from a young Mr. Seeley... - More Info

"This video part got me on Sunday Pro. Every trip that I went on was a gamble, since I was an Am rider. It worked out, and I was able to put something together. I did the 180 over backwards to Indian out. It was on a red rail in Guadalajara. That goes back to Neal Harrington, who inspired me; I did an NBD at the time. I was super hyped on that part. I picked the song. I got a flat and filmed a line on Chad Shack’s bike, a turndown on a bank, to ledge ride to gap into the bank. It was weird because I’d never done a turndown on his bike before. I’m surprised I even did that; I’m more cautious about those things. I was fresh out of high school and hanging out in NYC every weekend."

Video Vault: Jake Seeley - Sunday "Up, Up And Away"

Progressive action from the then up-and-coming Sunday am... - More Info

"I was living in Austin, Texas with Jared Swafford, Bee-Cam, Kareem Williams, Levi Brewer. It was one of these random things where, “I’m going to live in Austin.” I ended up on this dude’s couch one night, and they just let me live there for six months. I slept on the couch. Definitely overstayed my welcome. Shout-out to them for that. It was around the time I was getting more stuff out, and Stew Johnson reached out to me one day. Garrett Reynolds was out there filming for his Props Bio. I grew up riding with Garrett a lot, and both rode for Manmade and Nation. I got to go session with him a bunch and watch him destroy it for that Bio; I got to witness that truckdriver he did.

I really like the song; I’m a big fan of metal. I stepped it up a little more out of my comfort zone for this one. I got to really meet Stew and bro down. We traveled a bunch for that."

"This is still my favorite part. I pushed myself to my personal hardest, like with certain barspins out of tricks. I was super-motivated during that whole time. I was living in Austin for two years and riding so much. I felt so comfortable and good on my bike. That is the peak I strive for. I can ride at that level if I put my full effort into it. It got me hyped, and still does. I learned a lot and became my own person. My life was literally the title of the video. Walter is super dialed, this was the first part I worked on with him. There are a lot of favorite tricks in there. In Albuquerque, I did a feeble 180 to X-up grind down a ledge; I always wanted to do that, and it was the perfect setup for it. I didn’t have a plan to go and do it; I just saw the setup and thought it would work. There is a clip shot in Erik Elstran’s town manual to backwards switch feeble to over feeble indian out- I like the aesthetics of the spot; everything got used. The feeble hop over wire to smith down the ledge- there was a security guard freaking out the entire time I was trying it. I did it a few times, but I wanted to get to the end of the ledge. As soon as I did, I just flipped him off and cruised down the parking garage, so satisfied. Every trip I went on was so fun; we did a lot of traveling. It was the longest I had to film for a part, about two years."

"My most recent part; super stoked on it. Not doing the craziest tricks, pushing my skill level, it was more about the setups. Working with Mike, he has an eye for it. Most of the stuff I filmed was setup oriented more than what I usually look for. I tried to think a little more outside the box. I was so pissed I didn’t land this one trick- I put in the most work I ever put in for a clip, and it just didn’t happen. It was a really emotional moment; towards the end I was really losing my fucking mind. All these dudes and Joey Motta rolled up and were mad respectful. They offered us gas for the generator to keep the session going. That showed me there are still good human beings out there. We were at this apartment complex in Northampton and I was trying this tires ot bar. Multiple times going there, this lady called the cops. They met up with us and banned Mike (Mastroni) and I from the apartment complex for 3 years. I was really hyped on the chain hop feeble chain hop. I’ve been seeing that setup for so long; I first saw it when it was covered in snow. I had no reason to try it until Mike got into town. Biz was there too, it was sick. The gap tires into the rail with the kink at the end, it was in front of a hospital. There was a cop car right in front of the rail. I saw the cop walking out of the building, and literally just did it. He comes up and tells us we can’t be there, and let us go. Glad it worked out." 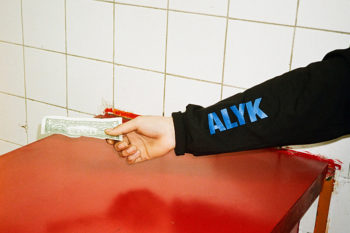 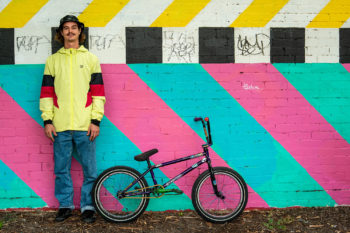 "the more dings, scratches and wear on it... the more character and memories."