This never left our VHS player throughout 2002...

Hitting the North since way back when. Gap to turndown circa 2007. Photo by Ricky Adam

Anyone around my age with an interest in street riding should be more than familiar with James Newrick and his NSF 2 part, which was released on VHS in 2002. Even now, whenever I hear that Peter Hook bassline on Joy Division's Shadowplay it makes me want to go and hop something in a bleak Northern setting. The BMX world has changed so much since NSF 2 that it's hard to explain how sacred BMX videos such as this were. Maybe to me this one holds some extra sentimental value because I suppose buying this video was my first step in a direction that would ultimately lead to my becoming friends with James, eventually being lucky enough to call myself a small part of this scene, and actually end up living with him and a handful of the NSF crew in Newcastle a few years later. But that's another story altogether...

Gap to pegs to 180 almost a decade ago somewhere in the North of England. Insert Smith lyrics here. Sequence by Ricky Adam

There wasn't an abundance of quick hit internet videos out there, especially for a style of riding that was so niche at the time, so whatever videos you had would be played over and over again until they were burned into your memory. For me, NSF 2 was one of those videos. As previously mentioned, this was my introduction to the NSF scene, and I was personally very influenced by what they were doing. I felt that the Southern street riding scene was predominantly bland and uninteresting to me at that time, and the way that the NSF were riding and setting up their bikes really appealed to me. They just had an edge to them which I found really refreshing. NSF were at this point known as a fairly infamous group of people. Known troublemakers who travelled in large groups from a part of the country that soft Southerners like myself had never even been far enough North to see. NSF 2 was a glimpse into that world, and once we got a hold of this video it quickly became a pre-ride staple. Newrick's section was the one that was played the most in these instances - in fact I would still put it in my top ten most watched video sections, some thirteen years later.

A few things to note when watching this are that riding brakeless wasn't something that everyone did. Newrick and that whole Newcastle scene was definitely somewhere near the forefront of that whole movement. A lot of the tricks he does in the section are still considered hard today. You didn't see tricks like hardway 360s and bunny hop whips, or manual 180s without huge carving arcs leading up to them. In fact the whole video contained a lot of riding that was considered extremely technical and in a lot of cases very different to what most other pockets of riders in the country were doing. This really was a documentation of really progressive street riding at that time, and I think that many would agree that Newrick's unique approach to riding and video production laid down a lot of foundations for the direction of street riding in the UK for years to come. - JC

Cat got your tongue? DIG article spread from issue 30 in 2003. Photos by Ricky Adam

Words of wisdom on the back cover of NSF1.

Antiques roadshow? Jim was featured on the cover of DIG issue 30 back in 2003 with a caption that read 'an old trick that's still sick'. Photo by Ricky Adam

It's hard to explain how sacred BMX videos such as this were... - More Info 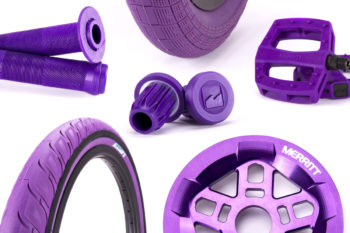 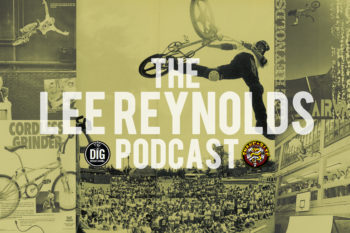