'Made In Oz' - The Tempered Hell Seeker Frame

Australian born and bred! Feast your eyes on the new Hell Seeker frame from Tempered Goods, handbuilt down-under and ready to roast. Scroll down for the full story from workshop to bowl, featuring interviews with frame builder Rob Benson and team rider/art and direction main man Ryan 'Chowgy' Saville.

"This project proudly represents a historical mile stone for Tempered and its place within Australian BMX. To be able to create, build and make available to the public these frames is truly humbling and epic.

Built by our good friends at Tempest Bicycles. Tempest Bicycles was founded by Rob Benson, a frame builder who did his apprenticeship under Paul Brodie in Canada. Rob has over 10 years of experience bringing frame building dreams to life.

Being as this frame is handcrafted down-under, we wanted to try and capture some of the Bespoke workshop vibes in the overall project, from the classic geo to sticker decals. Drawing inspiration from the (Mid School Era) “good old days” of BMX when DIY rider run frame brands were evolving and shaping BMX.

We wanted to create a frame that riders would really vibe and appreciate, so we in-listed the help of Sydney shred lord and team rider Ryan 'Chowgy' Saville to assist with the geo, spec, and overall direction of the frame; including name and art. Chowgy is a deep end demon, loves to get loose, so this frame needed to reflect his needs. Although this isn't a Signature frame we wanted the input and Ryans unique perspective to help inspire this frame." - Tempered Goods

- Welded and painted in The Hunter Valley NSW Aus

The Hell Seeker frame features more classic geometry, available in a single top-tube size for this first batch with more sizes to come in future batches.

First batch of Hell Seeker frames will be available end of September, with future batches on the horizon with pre orders to come.

Tell us about you BMX roots, and how has that lead you to where you are now building Bike frames?

I’m originally from Just outside Belfast in Northern Ireland (Editors note: Rob as part of our local scene at the original DIG house in Belfast). I started up riding late 80’s after I saw my friends brother surfing his bmx down the street standing on his seat and handlebars then blasting jumps of kerbs and thought yep that’s for me! From there I’ve always ridden a BMX and it’s taken me across the planet to some pretty amazing places

I’ve always had an interest in building my own frames, I used to pretty much day dream about it way back in high school instead of doing any actual work. Bmx bikes were pretty terrible when I was a kid and I’d regularly be in the garage with my dad welding mine or a friends frame back together, fixing or making new parts and it really started from there. I’ve spent a lifetime in the bike industry but when I moved to Vancouver an opportunity presented itself to take frame building classes with Paul Brodie so I used the time I had to take a bunch of them to learn how to build frames properly and it went from there.

Tell us about Tempest and your frame building workshop and school?

I started Tempest over ten years ago when I moved back to Australia from Canada. Originally it started as the brand for my custom frames and from there it’s grown to two bike shops with a third on the way (the last one will be inside our local indoor park at the pcyc in Cessnock) two bike brands and now our framebuilding school. With the framebuilding school you can book a course that lasts two weeks and we’ll teach you everything from the frame design with bike cad, right through to cutting and welding your own frame and you’ll leave with your very own frame you built with your own two hands.

How many years experience do you have welding/making bicycle frames, and how did you get started?

I’ve been making bike frames for over ten years now. I’ve been welding most of my life and learned from my Dad who was an engineer working on the Aerospace industry. We were always working on cars, making stuff (like a scale replica of the local railways including all of the stations that could be ridden up our garden)or re-welding one of my bikes and he’s been a huge influence on me.

Why buy it when you can make it yourself?

I learned to build frames from Paul Brodie when I lived in Vancouver. I’d always liked Brodie bikes and the timing was perfect as he was running classes at the university of Frazer Valley. I built of bunch of stuff with him then started saving and working every hour I could at the bike shop so that I had enough money to start my own workshop when I moved back to Australia.

If you could recount how this collaboration to make some TMPRD frames come to be in your own words?

I’ve known Chris at Tempered since I moved to Australia and I was always around at his warehouse getting stuff to keep my bike running and he’s always looked after us! He contacted me a while ago when I moved my bike shop closer to the central coast about the possibility of making Tempered frames and he was really keen to have these built and sold locally. So basically, we design everything together in house and take care of all of the fabrication. We purchase as much as we can from local suppliers and even have our dropouts cut, tubes bent and frames painted all in the Hunter Valley which was true to Chris’s vision of pasture to plate, built local and sold local.

How did this Aus-Made TMPRD frames come to be from your perspective?

Chris and yourself approached me about doing an Aus made tempered frame and asked if I’d be interested, of course I said hell yeah and then from there we just had discussions working out what’s best what will work what won’t work.

We came to you to help inspire some of the Geometry, tell us about the frame geo and why.

It suits to ride bigger transition but also doesn’t take away riding smaller transition and/or street riding which in my opinion is the best geometry that suits all.

You also helped some of the creative art direction, tell us about that.

Just tried to represent my style and things I’m into, I’m a fan of Norse and Viking graphics so incorporated that I.e Vegvisir which is a Viking compass.

What do you think about the frame being Aus-Made?

Oh so stoked, TMPRD have done a sick job and hopefully this kicks off more here in Aus.

From the workshop to the bowl - More Info 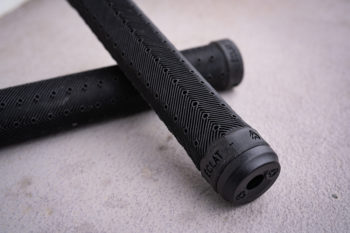 Why is the grip not round? 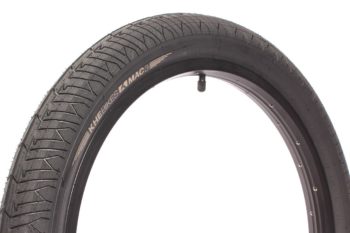 "Double Carcassed" and upsized for the streets