"Got no wisdom left, just teeth"

As long as I’ve known him, Mike Hoder has always come across as an “actions speak louder than words” kind of guy. He’s quick to brawl at a bar, or even multiple bars on any given night and, if he feels the situation calls for it, has no problem casually putting a serious hurting on another human. But even if he seems like a wild man who doesn’t give a shit, when you look into it more, you’ll realize that’s not the case. Hoder has firmly held convictions and is always true to himself and his friends.

From around the time I met him when he did that infamous 360 gap at the Brooklyn Banks, to his Animal Foreign & Domestic ender from a few months ago, witnessing and documenting Mike’s riding has always been a treat. He’s quick to do some wild maneuver over or down some insanely high setup in one or two tries, but always seems to land so smooth; it looks as if he was jumping down a five-stair.

This interview may be relatively brief and doesn’t necessarily delve into extensive philosophizing by Mike Hoder. But that’s OK because it’s not his style, and I’d rather watch him casually do wild shit daily anyway… - RD

Hoder has spun a few wild 3's around lower Manhattan over the years. Here's the latest- Foreign & Domestic ender.

Editors Note: This interview took place just after the East Coast U.S. was hit by Hurricane Sandy late in 2012...

What have you been up to?

Chillin’, riding a bunch, shooting photos with you (Rob). It’s been super nice out the past few days.

How was the Hurricane Sandy experience?

It was fine; Bushwick (in Brooklyn) didn’t get hit with it, but everywhere else got fucked.

Did you check out the streets, like lower Manhattan, when the power was out?

I rode around and it was crazy seeing all the stuff that floated in from the river up on the shore all over the whole of downtown Manhattan. It was all flooded, fucked up.

How was it at night?

It was insane, not a single light on.

Did it get crazy on the streets at night?

I don’t think it really was; it was pretty locked down. I didn’t go into Manhattan during the blackout. You did Ralphy; how was it?

Ralphy: You couldn’t see anything; it was mad fun.

Some dude passed by you yesterday and said a funny quote to you. We were riding, and I hopped up a ledge and did a little manual, and right when I landed I turned around and started walking up the sidewalk, and this old man about seventy-five years old just walked up to me and told me I belong in a zoo. It was pretty good.

What did you think?

He was right. (Laughter)

Do you plan on staying in New York now permanently?

What keeps you here?

Just so many good spots to ride; it’s endless. Edwin showing me around everywhere and shit, kicking it with Ralphy every day. The West Coast trees here; we’re good. (Laughter) I’m living here for good. I’ve lived in Seattle long enough, San Francisco, Santa Ana, L.A. I’m down to go on trips. I’ll miss family and parents; that’s a little difficult. I won’t miss the rain. Even in New York, I’d rather it be cold and sunny, than cloudy and pouring rain every day.

Edwin: How does it feel to have lived in three out of five boroughs - Manhattan, Brooklyn, and The Bronx? You moved around fast.

I’ve been all over the place. (Laughter)

Ralphy: What is it like to live on one of the most dangerous blocks in Bushwick?

Yeah, it’s bad; there's a lot of drugs and shit going on. They all know me; I’m just riding my bike. They don’t fuck with me. I got a nice crib, so I’m not tripping. There’s a fight every other day - fools getting jumped, guns getting pulled. They aren’t getting pulled on me, and I’m not doing the shooting.

Edwin: If you go on Hoder’s block, you know what song is popular, because motherfuckers come through blasting it. I love that block. It’s like how it used to be back in the day.

What’s your favorite neighborhood to ride?

Staten Island. I never go there. I don’t know anything about it. I just know it’s a ferry ride away, and I’m not trying to get on the ferry. I’d rather just pedal down the street or over a bridge. I can never get anyone to go out there; I’m not going to go out there solo. I do need to check out that 50/50 skatepark, though.

How did it feel to have Edwin shoot you with a roman candle back in the day?

I came out here (New York City) in 2005, pretty much to do that three at the Brooklyn Banks (sequence that ran in issue 50). My mom had gotten me a brand new jacket for the trip. I was over at The Shack, and Blackman told me to come check out the backyard. I went out back there, and had the brand new coat on. All I hear is someone getting lit up. I look behind me and it’s a roman candle; next thing you know, I’m getting shot at. I turned my back and covered my head with the coat. I get hit in the back. I took off the coat, and there is a big-ass hole in the back. (Laughter) It was the first two of the thirty days I was here.

What’s up with your new tattoo?

It’s an American Flag on my hand. Home of the brave.

You have quite a number of tattoos; what’s your favorite one?

I don’t think there is a favorite. They are all different.

What’s your worst one?

All of them. (Laughter) The back is pretty bad.

Edwin: I saw him when he first got it, in 2006. I went to Cali in 2006 with Tom and the normal crew. I saw Hoder there, and he lifted up his shirt and I seen that shit for the first time. It was sick. Number one, with his name on the back like a basketball jersey, but for life. You don’t even play basketball. (Laughter)

How about that crash in Philly around 2007?

I was just out doing whatever. I went to Philly to meet up with you (Rob). I tried to wallride this eighteen-stair. First one I landed, and blew off the bike. The second one I was pedaling as fast as I can to it. My chain breaks during the last crank before I went to hop; flipped over the bars, slid down all the stairs on my head. I put my hand on top of my head and I had burned hair off my head from sliding against the wall.

Ratkid: I thought you were dead. First time I ever thought I saw somebody die. Worst-case scenario.

It was seriously one of the worst crashes I had ever seen. You were in a scorpion position with your head in the corner, sliding against the wall the whole way down a flight of eighteen stairs.

I didn’t fuck up my face, no cuts; just burned the hair off my head and dislocated my knee.

Wallride number 420 for issue 92 in Mike's original hometown on the left coast.

You come off as a pretty intense guy; how do you release anger? (Laughter)

Lifting Kuffi’s. (Laughter) Ride my bike as fast as I can; I don’t know.

Favorite day of the year?

Light a cigarette up. Go out and pedal around for a bit. Get my first meal at about 5PM; I don’t like eating early at all. Breakfast and lunch is cigarettes. Then get drunk and go to sleep. Then do it all over again.

What was your favorite toy as a child?

Stretch Armstrong; you could try your hardest to rip him in half and it would never happen. (Laughter)

What class in school did you think was totally useless?

All of them. Gym, because I rode my bike all the time anyway, so what the fuck was the point of me getting more exercise?

How many wisdom teeth do you have?

None. Got no wisdom left, just teeth. (Laughter)

What could BMX use more of?

Real riders; none of this fake shit. Not as much about the tricks. More originality and style. More kicking it, and being laid back.

What could BMX use less of?

When was the last time you did a tailwhip?

Never even done them, and never will. Unless I take an Adderall and it works. (Laughter) 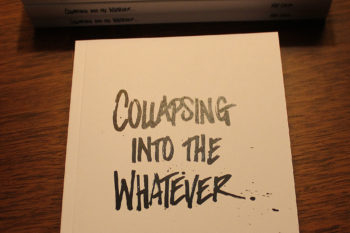 Collapsing Into The Whatever 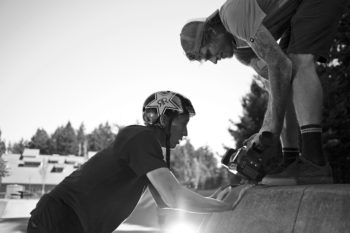 Friends Til The End - Chase Hawk and Joe Rich