Grant Castelluzzo recently traded Midwest snow drifts for California sand dunes, relocating to the popular BMX city of Long Beach.  Perfect spots, ideal weather, and an abundance of motivated riders and videographers make it easy to be productive in California, and Grant has wasted no time getting to work both on his bike and behind the lens.  Mutiny just dropped a fresh video promoting Grant's signature Obscura frame (new Trans Olive colorway available next month), we thought this would be a perfect time to take a look at his setup...

Back wheel: Profile Z Coaster Hub laced to G Sport Birdcage Rim with a
Profile Drive Side Guard (prototype) and a BSD plastic guard on the on non-drive side.

How did you choose the 2016 colorway for your signature Mutiny frame?

When it comes time to picking a color Gaz usually sends me a few colors
that he thinks would do well and then I pick the one I am the most into. We
usually try to do something a little different than what the current market
has and I think we succeeded with this color.

Besides the fresh colorway were there any other changes made to the Obscura
frame?

New for 2016 is a thicker 6mm drop out that has a built in chain tensioner
to keep your chain tight and your back wheel centered.

Any mods to current setup?

I always cut my bars down to 28 inches wide and I cut the flanges off of my
grips. Aside from that everything is the same as it is out of the package.

More Tech Than You Can Shake A Stick At - More Info

You moved to Long Beach within the last year, what sparked the move after all these years in the Midwest?

Honestly the number one reason is the weather. Midwest winters are long and
tough. I finally had saved enough money and decided to just go for it. I
had been wanting to move out this way for years but I just wasn’t in the
position financially to make it happen.

How’s your time in California been so far?

It has been great! I love it out here. So much to ride, so many people to
ride with, perfect weather, and a bunch of like-minded people make it easy
to enjoy it here.

Biggest adjustment or anything you didn’t expect about the area?

Nothing I didn’t expect but the biggest adjustment was definitely the cost
of rent. I pay double what I paid in Wisconsin and I live in a drastically
smaller apartment. Despite the cost of living being higher it is still
worth it. I tell people at home what I pay for rent and they think I’m
crazy but to me its worth every penny.

How long did you spend filming with Doeby for the new Mutiny video?  Did
you split your time between Long Beach and San Diego mostly?

We started filming in January so it took about 8 months to finish that video. That
certainly sounds like a long time but it isn’t like we met up regularly.
Both of us were busy and we don’t exactly live near each other so weeks and
sometimes months would go by with out us being able to meet up. Every time
we met up though we got as much done as possible. Can’t thank Doeby enough
for putting in all the work he did for me!

Had you worked with him on any prior projects?

I had not. Doeby had hit me up before the idea of the video ever came about
seeing if I wanted to work with him on something and of course I said yes
his work speaks for itself. Then Gaz asked me if I wanted do a project for
Mutiny and I connected Doeby and Gaz and here we are. I am super hyped on
the way the video turned out and its all thanks to Doeby.

What’s one thing about working with Doeby most people wouldn’t know?

The man loves weird sayings and weird food pairings. He has big ideas that
might change the food world after he is done filming BMX that’s for sure.

Any other video projects of yourself in the works to look forward to?

I am about to start work on a video for Profile as well. Hoping to have
that out by the end of the year.

How about any that you are filming with anybody?

I have been filming Dan Kruk for WTP Foundation so be on the look out for
that project whenever it drops because Dan is nuts. I just recently wrapped
up the Madera 10 Year Mixtape which celebrated Madera’s 10th year in
business. That was the biggest project I have ever filmed and I am really
proud of it. I also have been quietly working on a video for Sean Morr’s
signature frame from Stolen, which should be wrapped up soon. Hyped for
everyone to see what we have been working on.

Hopefully more of the same riding, filming, and working. There’s also a few trips in the works that I hope end up happening. 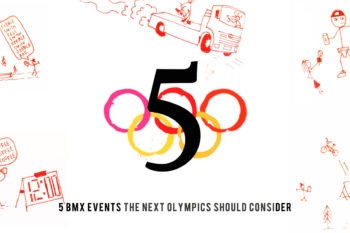 Five BMX events the next Olympics should really consider instead 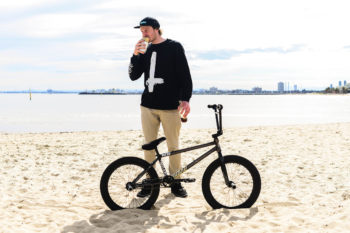