The Importance Of Keeping It Local

Finding out more about the K.I.L. Tours - At home with The Shadow Conspiracy at the Sparkys Night Jam

Interview and Photos by Wes McGrath

First there comes an idea, then comes the motivation to fuel that idea… A little twist of fate and the right recipe for success, Ronnie Bonner has spent years working hard to accomplish a goal that is common amongst his supporters, staff, and riders and as a whole, his family. BMX is something we all start with at home and can take us all over the world.

For 'the kids', getting a chance to ride with their favorite pros has usually been an relatively unobtainable goal, but a few years ago Ronnie and his team set out to help change just that by bringing BMX to the people via the The Shadow Conspiracy and a series of worldwide events called the Keep It Local (K.I.L.) Tours.

To find out more, we caught up with Ron and Shadow’s TM Chadwick at their recent Sparky’s Night Jam held with a select bunch of their Pro team the night before an event for the locals on home soil, where it all began.

How did the idea of Sparkys come about, and when was the actual distribution company established?

Ron: I started Sparkys distribution in the year 1995, with our main brand being UGP underground products. At the time there weren’t any or many distributors that focused just on BMX. I had already been running UGP Underground products for a few years and wanted to create a place that I could work with my close friends. We wanted something that was more of an incubator of ideas, more of an opportunity center that would facilitate a platform for all of our ideas to come true.

What exactly is the main objective to the Keeping it Local Tour?

The idea "KIL Keep it local" is to expose local riders to other riders from around the world. When I was exposed to this idea I realized how small the world was and how BMX could help me see more, and as I saw more I realized that local scenes are the most important part of BMX. Hence, we wanted to create K.I.L. “Keep it local" as vehicle to help give back to the local scenes.

Did the Keep it Local Tour start strictly with Shadow?

Yes this is a project ran by The Shadow Conspiracy. Shadow was started in 2002 and is the grandfather of the Sparky’s lineup, so when the idea of KIL was spawn it was destined for Shadow. As Subrosa has a different take on how to give back and it's called "Subrosa Park Parties". Both projects goals are to help expose show case local riders.

How many years has the K.I.L. project been running strong?

I believe that 2015 will mark our 3rd year of the “Keep it local" Project.

When you choose a city to throw an event, how to you pick a location?

We try to host these events at the local shops in the city we choose and have the shop bring in rails, and other type of obstacles.

Subrosa's Kyle Hart – High-speed turndown for Sparky’s over the rail.

"I realized how small the world was and how BMX could help me see more, and as I saw more I realized that local scenes are the most important part of BMX." - Ron Bonner

Trey Jones – Big 360 off the Roots bench to flat past the box.

Finding some warmth away from snow, Mutiny's Grant Castelluzzo wasted no time shredding this smith to table.

After the stop is over, do your riders get the chance to ride street with the local kids?

We always try to ride with the kids; it’s so much fun hanging with the locals and checking out their local scene, as they want us to see it. For example, check the video Chadwick made during the K.I.L. France tour in Lyon, which was so dope!

How do you keep a “Local” vibe on an international scale, and why is that so important to you and your vision behind the project as a whole? Would you call K.I.L. a “project” as I so put it?

As for K.I.L. vibe worldwide that is easy as each place you go is "local" and we are there because we want to learn and meet new locals. This idea and process never gets old as meeting new people and riding their spots with them is one of the best things ever about BMX! I would fully call "K.I.L." a project, as it’s ready to help local scenes get exposed to new ideas, new people and in return they can share what they have grown locally to a world wide scene.

Who originally came up with the idea?

This was an idea I had, but we as a group made this into what it is has become. Really stoked that we are heading into our 3rd year!

This night I don’t think I saw Jono Hopping slow down one bit, and this manual to whip was at the end of a full day of riding.

Feeling a sense of nostalgia, Shadow's Johnny Devlin blasts this 180 toboggan off the same bench he rode in the 2001 Roots Jam.

Trey Jones, Sean Burns, and Colt Fake all decided to end the night on a high note with this triple fence with virtually a 20-foot landing strip. Jumping into a pitch black wasn’t a worry at all as they all pedaled toward the last clip of the night!

Besides the masterminds in the office, there is a lot that goes into making these events actually happen smoothly all across the world. I asked Shadow team manager Chadwick a few questions on his role for some further insight.

When did you become team manager of Shadow?

Did K.I.L. come to life before your involvement with Sparky’s?

The Shadow Keep It Local tours were actually one of the first things that I was actively involved in when becoming the TM for Shadow. The initial idea was that Shadow wanted to bring BMX to the people. A lot of brands had stopped doing shop tours and we felt that coming out to the local scenes and letting kids interact directly with the pros was an important aspect of solidifying their love for BMX. The first trip was to the North East where we visited Van Homan’s 2x4, Ed’s Bike Shop, and Penn Skate. It was right after Rickey Bates passed away and it was an extremely emotional time for the whole crew but the amount of love and support the locals showed for us really cemented the fact that these KIL tours were important for not only us, but also the future of BMX. Since then we’ve had tours in Russia, France, Italy, Germany, Ecuador, Canada, and a countless number of States in the US.

What are you responsibilities for the project?

Being the team manager, I’m directly involved in the planning and executing of almost all KIL events. With the help of Shadow owner Ronnie Bonner and our killer sales staff back at the Sparky’s Distribution office in Orlando, we are able to figure out who and where would benefit most from a Shadow KIL tour. From there it’s a matter of rounding up the team, making the trip out, and having a good time. We try to bring as much goodies for the dudes to give out to the fans and enough posters to make sure that everyone goes home with an autograph. It’s really important for us to be able to interact with the local riders and make sure that they know we are people too so I make sure to let all the shops know that this is about riding with the pros and not some wild demos. We want the kids to come out and expect to have a fun session with Simone and Lahsaan because those are the moments that stick with them forever.

"We want the kids to come out and expect to have a fun session with Simone and Lahsaan because those are the moments that stick with them forever." - Chadwick

Can you tell us more about the Sparky’s Night Jam and how that connects to the KIL tour?

We held the event at home at the Sparkys Warehouse in Orlando, Florida so that an often forgot about but extremely important scene was given a truly awesome event. It was a way for us to say thanks to the locals and an opportunity for them to meet and hang out with a selection of the Sparkys Pros. The Sparkys Jam and the Sparkys at Night session are a direct extension of the ideals we set forth when creating the Shadow Keep It Local tour. What started as a simple idea for one brand to bring BMX to the masses has branched out to an overall company belief that made sponsoring and putting on local events a number one priority. Without the KIL Tours, none of this amazing stuff would have ever been possible!

After three years of this, what are your feelings about the project, would you say it’s working?

It’s crazy to think it’s already been three years, but we couldn’t be any happier with what the KIL Tour has become. From starting as a simple shop stop, it has evolved in to events, contests, etc. People from all over the world call and ask to be the next stop on our KIL Tour and although we can’t say yes to everyone, eventually, I hope we’ll be able to see each and every one of our fans faces. So to put it simply, yeah, it’s working!

Keeping it Local with The Sparky's Crew - More Info 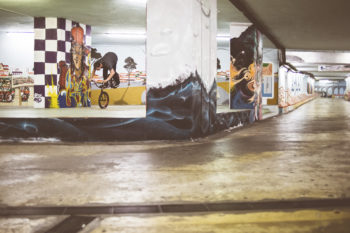 Parting the water with FIT in Portugal... 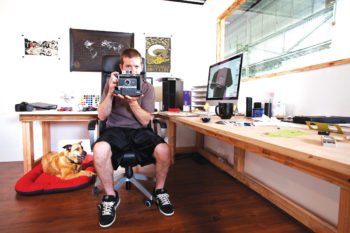