Everyone knows the legacy of Van Homan’s Criminal Mischief section. It’s arguably the most epic video part ever created—and still continues to be talked about 13 years later.

Somehow, Van continues to throw it down at such an insane level in his newly released Holy Fit part, including doing moves he joked about while filming for Criminal Mischief. Progression can be perceived in various ways, and despite being in his mid-thirties, Van amazingly still continues his own upward curve. Here are seven links between Van’s Holy Fit and Criminal Mischief parts you might not have thought about:

01: Stew Johnson can pick a winner.

Master filmer/ editor Stew Johnson picked the song for Van’s Holy Fit part, which is pretty obvious since he edited it, but he also suggested using “Diary of A Madman” to Little Devil owner/ Criminal Mischief editor Derek Adams for Van’s section. Stew has a knack for choosing the perfect tune. Van further elaborates: “When Stew suggested ‘Diary of A Madman,’ Derek wasn’t into it at first, but Derek started listening to it more and started to see the vision.Stew also picked my song for Holy Fit. He suggested it, but it took me a second to warm up to it. I trust Stew.”

Sometimes roll-aways are a little bit too sketchy, sometimes clips get accidentally deleted, sometimes human error messes up the filming of a clip. Shit happens. Not so with Van’s Holy Fit part. “There were no re-done clips where I pulled it and had to do it again. The only reason that happened once with Criminal Mischief, was when I had to do the rail-to-rail again because the footage got stolen.”

As if ice-picking the infamous Penn rail back in 2000 wasn’t crazy enough, Van decided that after a decade it was time to one-up himself, and he proceeded to manual it—in one take. “Manualing the Penn rail was rad to get it done, because it’s one of things that I would joke about doing during filming Criminal Mischief. At some point you start to think, ‘Wait, that could happen; I could do it.’ For years, I thought about it before I actually went. Even the way it worked out was unbelievable. Since there is tight security on campus, the day I went, I warmed up a few blocks away and I sent Stew there to set up. When he was all set up, I go check it out, and there are all these workers setting up some stage. I go for it, and just float down the rail on my back tire. I couldn’t believe it worked first try. The guy setting up the stage looked confused; to him it looked like I casually did this, even though I’ve been sweating this for like over ten years.”

04: With accomplishment can come injury.

Van does outrageous things. With that level of danger, comes the inevitable injuries, even major ones. And while the first clip filmed for Holy Fit was four years old, there wasn’t a full focus on the video at first. The last two years became a main focus on finishing the video for the Fit team, and Van lost one of those last two of filming due to a broken leg: “It’s a little disappointing, because you get your mind and confidence in a certain place; it takes a long time to regain that mindset after an injury. During a California trip, one of the first clips I filmed (after the leg injury) was the opening clip in my part. I eat shit really hard but ended up getting it. The feeling of battling it and winning was good. I was kind of bummed because I was out for a month (from that crash). Then I was thinking sometimes that big stuff wasn’t worth it. Sometimes you have struggles with yourself as to what you want to do. But it’s in you, and you go back to the scary stuff. I go through phases. There’s a fine line between being smart and bitching out. I think it’s just trusting your instincts. I enjoy going out and challenging myself, and the feeling of riding away from something that scares the shit out of me is an awesome feeling.” Towards the end of filming for Criminal Mischief, Van tore his ACL and had double-knee surgery. Despite these major setbacks, somehow he still produced two epic video parts.

05: No scrambling at the eleventh hour.

As previously said, Van had no choice but to stop filming for Criminal Mischief a little earlier than anticipated. “I would have tried to film more for Criminal Mischief, but since I tore my ACL ligament the last few months of filming and couldn’t ride, I took a pretty major role in filming the other guys; some guys still needed footage. With Holy Fit, the video was completely done a month before the premiere. I was content; I wasn’t trying to force anything or squeeze in last-minute footage. I was happy with my enders. The one time that has happened with getting clips down at the wire was when me and Wiz were working together on my Two By Four video part at his house. We literally edited the part, was done 100% other than a space for the ender, packed up the camera, drove to this spot down the street, got the clip, drove back, loaded the footage, put it in the part and it was finished.”

Once thing that is consistent in all of Van’s video parts is the burliness and sheer level of danger in almost everything he does. That’s what everyone thinks of when they hear the name Van Homan. “My style hasn’t changed since Criminal Mischief; it’s just more of me doing what I do. Criminal Mischief was obviously more progressive for the time. I’m just proud of the fact for how long I’ve been doing it.” And you might be surprised to learn what clips Van likes most in his Holy Fit part, which aren’t the enders: “My favorite clip is rail hop to manual bonk on a pole; I like it when a clip is unexpected. Even in the beginning, I do a couple of up-rail tricks that aren’t really traditional; I like throwing a curve ball.”

As many may have anticipated, Van’s part closes out Holy Fit. “I’m honored to have the last part. My part is my part, no matter where it is in the video. I don’t think it necessarily means I have the best one. Everyone came through; Shawn or Tommy could have easily had the last part. Whatever Stew or Chris (Moeller) think is going to be best for the video overall.” And it’s a closer section that is well-deserved.

Through the release of his latest blood, sweat and dedication endeavor via Holy Fit, the incredible legacy of Van Homan’s street prowess shall continue on for a very, very long time; Van Homan has saved us once again…

Again and again Van Homan will save us - More Info 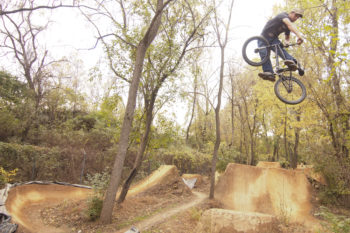 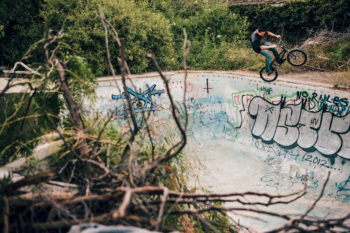