"We both feel strongly about supporting the younger generations of BMX"

When the word got out that Aaron Brenner and Tony Neyer where opening up a shop just a block away from their house it really came as no surprise at all, as their both always up for a new adventure and had already been printing shirts for numerous BMX clothing companies and others out of their garage. Not to mention the heavy list of locals in the immediate area, Ty Morrow, Sean Ricany, Miles Rogoish, Mike Hoder, Augie Simoncini and Shawn Mac just to name a few. With the jam only a few days away and a long overdue visit to see friends needed, I made the trip up to LA to see just what Thee Block was all about. Was it a clothing store, a place for them to print shirts out of, a full blown shop, or a way to get everyone out of their house "The Palace"? To find out I asked Aaron Brenner a few questions to get some more insight into his thoughts and goals for Thee Block...

So the news of you guys opening a shop and having a grand opening all seemed to pop up pretty quickly. I know you guys have been doing a lot of printing for others from home. Did the print jobs just get to the point where it was time to have a real workspace, or was a bike shop something that has always been in the back of you're heads?

I would say that the shop came about due to a combination of the reasons you mentioned above. We started up printing out of the garage at The Palace and as time went on things were getting to the point that we knew our days there were numbered. Since we knew we had to start looking for a location it only made sense to look for something that could be multifunctional and give us place to present ourselves and the brands we are working with in the way we would want for them to be seen. We both feel strongly about supporting the younger generations of BMX so having place for them to come to sounded amazing.

Had you guys been searching for a location close to the house, or did you guys just happen to stumble upon the perfect scenario?

When we started having conversations about looking for a spot the biggest factor for us was for it to be close to a train stop so that it could be easily accessible for anyone in LA to come hang. As we got out and started looking we pretty much followed the Metro Red Line and called any place we could find with little to no luck. After searching all day on Easter Sunday I (Aaron) remembered seeing a rent sign right near our house and mentioned we should drive by, but I really didn't expect much. When we arrived the landlord was actually coming out of the space and we got into an in depth conversation about everything we were hoping to do with a location. In about an hours time the landlord saw our determination and a decided he would be down to give us a chance but we pretty much had to make a decision at that moment as other people were interested in the space. It didn't take much more that glance in each others direction before we were shaking hands and grabbing keys. Long story short I guess you would say we stumbled upon a great situation.

Welcome to the neighborhood. Grand opening party with a serious turn out.

"Long story short I guess you would say we stumbled upon a great situation." - Aaron Brenner

What type of store would you say Thee Block truly is? Seems to be almost a tight-knit community of collaborators, from the people who support your friends, more so then just another shop for the sake of turning paper?

That is a great question that the answer to has been a continuous topic of conversation. I guess at this point you could say that Thee Block is kind of a showroom for ourselves and the people that we admire. Right now if you were to walk into the Thee Block everything in your sight will have been created someone in our circle of friends. This is something that we are truly proud of and we like to continue on a similar path for us long as the world around us allows. We do plan on bringing in some bike parts soonm but our plans with that are to only stock limited supplies of signature products that boast the names of the people you would find us riding with on the daily.

Certainly seems to be almost a collective of you're friends work and brands, what are some of the clothing and hard goods brands you guys will be carrying?

These custom power lines to hang shirts on are just one of many hand made pieces by Eben Fischer for the shop that helps to tie the entire concept of Thee Block together.

Stocked with The Trip, Peep Game, Cement Face, and more.

Ty Morrow ending a quick line with Malouf right behind him.

"Everything in your sight will have been created someone in our circle of friends." - Aaron Brenner

How did you guys decide on the name Thee Block?


I would say that the name kind of chose us. After our initial meeting with the landlord we headed to the hospital to pick up Hoder because he had just got out of the surgery due to breaking his ankle the day before. As we where walking into the hospital I looked to Tony and said "What if we called it The Block". At that point it was just another name on a long list that we had been tossing around. It was later that day as we were telling our roommates about the new adventure when Hoder told us that we should call it The Block, since it was on the same street we live, but just a couple blocks up. This was the point when we knew that was the name and it was just a brief conversation later that we added the second "E" to emphasize that it our one and only block.

Overall Thee Block turned out to have a really unique and appropriate theme about it, that ties in perfect to the name. Did you guys always have that planned when picking the name?

The theme inside the shop came about pretty naturally just like the name. The day after we decided on the name is when we came up with the idea to make power lines to hang the clothes on because we thought it played well off the name. Once the Cement Face homies came down to help with that project, Morgan Long threw out the idea of making a sidewalk for them to sit on, and from there came the idea to do the brick wall to look like the side of a house. When that project was done Eben got started on making the ceiling look like a cloudy sky and that pretty much sums up what got us to what it is now. Honestly had we had more time who knows how crazy we could have got with the theme. We still have a lot of ideas that will be coming to life over time.

Hoder half escaping the sun and keeping it healing.

One of Eben's many custom installations at the shop. Sidewalk complete with Thee Block manhole cover.

Ty Morrow serving up food on the grill all day care of The Trip.

I know Eben Fischer had a huge role in working on the inside appearance, as well as showcasing some of his shirts and brand Cement Face in the shop. How long did it take him to pull off all the custom pieces in the shop?

Eben Fischer absolutely worked his ass off inside the shop and we couldn't be more grateful. When we initially told Eben about the shop and what we wanted to do he was scheduled to be out of town to paint a car. It was only a few day later Eben hit us up and said that he had rescheduled the car painting so that we could help us out at the shop. Eben and Morgan Long came down almost every afternoon for 3 weeks and most of the time would work until midnight or 1am. The work pattern continued up until right after when we told people to be here for the opening night.

Who else had been instrumental in helping open the shop along the way?

Rocco Giuseppe, killed the flat rail set up all day long, and won some cash at the jam in reward.

With locals like Augie Simoncini, Ty Morrow, Mike Hoder, Sean Ricany, Miles Rogoish and Shawn Mac. You know Thee Black is going to be home to all, including Augies Dog Cash, who is already enjoying the turf.

Aaron holding down the fort keeping the social media alive while the others enjoy the jam.

Neyer keeping the rail waxed for the locals.

You're both still working almost full time, Aaron you with a job in the denim manufacturing industry, and Tony you as a full time professional rider. How do you guys plan on juggling all of that?

I have changed my position with the denim company to where I go into work early in the morning and take care of my responsibilities so I can be off by 11am and get to the shop by noon. Tony usually opens the shop and either of us have the freedom to due what we need to do because the other can always cover the shop. Outside of that we have to give a big shoutout to our buddy Noah who has really been stepping up to the plate and helping out with anything that needs to be handle. Noah is a great kid that is eager to learn and takes a lot of initiative and we are both excited to see what his roll around the shop could shape into.

Do you feel like the shop in a way although helping to grow BMX, also brings you guys closer to BMX? I know often times when I was working in shops, it was really refreshing to see the energy of the young kids getting into the sport and the locals.

Absolutely. Just within out first few days of being open we have met a bunch of riders in our area that we never knew before. Most of them have visited the shop multiple times at this point which is really exciting. We are excited to continue meeting riders of the community and hope we can bring them closer together by hosting events.

With the Grand Opening and Peep Game X Cement Face collab launch, do you guys have any other future events in the works?

The ideas are endless

For the grand opening Peep Game and Cement Face decided to drop a new collab shirt for the event. The original art up in the shop.

Thee Block has got all the local brands you need.

Keeping watch over the neighborhood.

Any shout outs people you would like to thank?

The bikes of The Block.

"We are excited to continue meeting riders of the community and hope we can bring them closer together by hosting events." - Aaron Brenner 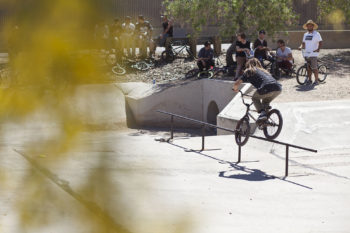 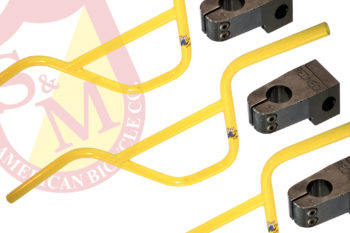