With the release of his 'Wheels Of Glasgow' portrait video, we thought we'd get some background on Scotland's most decorated rider of all time - Alex Donnachie. We asked him about his childhood, that first magazine article in DIG, discovering Glasgow as a teenager, winning an X Games gold medal, and what it was like filming for this documentary piece. Never one to brag or focus on himself, it was a nice change to see more from this (usually!) quiet and reserved guy. Make sure you watch the video and then scroll down for the interview and some archive photos you definitely wouldn't have seen yet.

How did you discover BMX? Tell us about the early days.

As soon as I learned how to ride a bike at the age of 5 I was never off of it. My first bike was a purple Raleigh 16 inch - it was my main bike for the first few years. It was way too big for me. I was just pedaling all day everyday. I also had a little track. I didn’t have any jumps, I was just pedaling in circles in the garden. I rode it so much it turned out like a dirt track in the garden, and eventually I made some little mole hill jumps. Then my dad made me a ramp out of plywood and car tyres. He just screwed the plywood into the car tyres and that was it. The perfect springy ramp!

Did you have any friends that rode?

I just had some friends from the neighborhood, they weren't into bikes as much as me but they would just hang out in the garden with me. No one else rode though - just me. The other kids were just hanging out doing what normal kids do, playing tig, football or tennis. Everything the other kids were doing was a team effort, and that why I like to ride a bike so much, it was all self control, you choose what the bike does and what you do.

What kind of kid were you?

As a kid I was pretty quiet, all I wanted to do was to be outside riding my bike and that was all that was on my mind. I would get up early, one hour before going to school so I could just go outside and ride my bike. I remember I would be covered with cuts and bruises all over my shins at school. My teacher must have thought, "What is this guy up to?"

What did your mum think of that?

She was used to me getting injured - always going to school with blood on my trousers. It was just a normal thing. I think she was just happy that I was outside enjoying myself.

I think we can all relate to this one. There's no greater feeling as a kid than building your first kicker.

Did it make grow up faster?

You started out riding dirt, right?

Yeah. We started building these trails in this abandoned horse field called “stars field trails” and that’s when BMX started to get a bit more serious. As we grew the jumps get bigger and bigger every year.

When did you get into street riding?

Around 12 or 13 I was only riding trails and hated street, I said I was never going to run pegs! Then all of a sudden we had the worst winters, two or three years in a row. We spent months and months digging the trails and we didn’t get anytime riding it in the summer. So that is when street began.

Where did you go street riding those first times?

After riding the same village year after year it got super boring so we were looking for new stuff to ride that's how we ended up exploring further away. I first came to Glasgow when I was 15 and finally old enough to get the train myself. Being around big buildings was definitely a contrast to being surrounded by fields and small houses, there was so much stuff to ride I couldn't believe it. The spots all seemed so close together. I was still in school so I would go to Glasgow on Saturdays. It wasn't easy because I live in the middle of nowhere so my mum had to drive me 30 minutes to the train station and then I would get the train for an hour and a half, and then I would be in Glasgow.

How did it feel being 16 years old on your own discovering Glasgow?

It was a good feeling being so young in the big city, I felt like I could do anything. We spent all day everyday riding street and filming. I really liked Glasgow because that was where everybody rode. That's where I first met everyone, as well as at Unit23. I would sit in school all week just day dream of coming back to Glasgow, it was all I wanted to do.

When did you realise you could make a living from BMX?

I first got sponsored at the age of 14 and I was quite oblivious at that age. I didn’t know what it meant really. I remember getting a free pair of pedals and I couldn't believe I didn’t have to pay for them. Because I was sponsored so young I didn’t know what being pro was or meant, I never even thought I could be the guy in the magazines, I never thought that could be me.

What was your first exposure?

Fred Murray came to the trails one day and he shot some pictures for DIG Magazine, those are my first pictures in a magazine. This was when magazine were big and were in all the shops, so I remember going to the supermarket with my dad and we got the mag. I couldn’t believe it. It was such a weird feeling to see myself in the magazine rather than just all these other people.

How did you get into health and fitness?

I had a really bad knee injury in 2018 and that’s when everything changed for me. I never thought about working out or eating well, I just did whatever I wanted for so long. It never crossed my mind that I should do that and when this knee injury came about, my body didn’t feel good. I was really against going to the gym but my physio kept telling me "you have to go to the gym". I just thought that was for athletes and people that want to get big muscles and that was not me, I just wanted to ride my bike. Going to the gym was the last resort for me, but in the end I am glad I did. It changed everything. A huge benefit was being able to ride for longer. I could ride all day and still feel fine and ride again the next day.

Footjam whip as the sun goes down behind the Kingston DIY.

"Around 12 or 13 I was only riding trails and hated street, I said I was never going to run pegs!"

Would you say BMX is a good life lesson?

BMX taught me a lot about life, it has given me a lot of experiences I will never forget. It's taught me to never give up.

What did your mum think when you won X Games gold?

She didn't really understand when I was out filming in the streets everyday, but when I won X Games it was a massive thing for her. It was a great feeling to come back to Scotland with the medal.

Why do you live in Glasgow?

I just love the city so much, it has so many cool people here, so many great spots to ride and there is a lot to do. It's one of the best cities to ride BMX in - there are so many different spots to ride, it’s endless. From old brick banks to steel rails, to new marbles ledges. It has it all. I honestly think it's the best city in the whole of the UK for spots. Every street is a new opportunity. The only problem is run ups and run outs - it's hard finding a smooth spot! Everything is super close and there's so much variety. Security is super chill. Glasgow is more than a home to me, it's my playground.

The Bmx scene here is quite small but everybody rides together which is cool. Bmx brings everyone together. BMX gives us our balance, and it’s even more powerful when you do it together. People really make Glasgow what it is. Everyone is pretty down to earth. Most people are really honest and 'real'.

If you had to pick three favourite spots in Glasgow, what would they be?

Obviously Clydeside ledges, then the Transport Museum, and then probably the Kelvingrove Museum C ledges.

Who are your favourite riders in Glasgow?

I'd say Dave Sowerby (BSD Filmer). I remember watching his street videos so much back in the day. Next would be Guy Scroggie, i've watched him ride since he was tiny - it's cool to see where he's at now. I'd say Hector Spencer-Wood as well. He lives in Glasgow now - he's amazing.

Alex and his mum Brenda outside her house in Perthshire.

Where it all started.

How was it looking through all your old photos and magazines with your mum for the 'Wheels Of Glasgow' documentary video?

Yeah it was cool to be reminded about some of those memories i'd forgotten about. It's been so long. I've not even seen any of those photos since they were taken. It was really fun to go back through it all and remember those times. It was so strange to see the old bikes that i've had over the years. It all comes back pretty fast. It made me think about this one day when I was a kid, and I was so excited to get a new part for my bike that I pretended to be sick so I could stay home from school and wait for the postman. It seems so stupid now because it was just a part for my bike - I can't even remember what part it was now. I remember I got a Props DVD at the same time so I just watched that over and over all day.

How did you feel talking about yourself? Do you find that stuff difficult?

Yeah, mostly because I have a hard time getting my thoughts out and explaining what I actually mean. I'm not very articulate, so it's a real struggle for me to explain what i'm really thinking and for it to come across the way I mean it. It's definitely hard. I'll say one thing and then I realise it's not what I mean at all! I'll just think, "Damn, why did I say that?!" I've only had to talk about myself on camera once before and that was for an X Games Real BMX thing in California. Luckily they didn't use any of it in the end!

What was it like getting your mum involved in the documentary?

I didn't really know what was happening before the shoot, so she didn't expect so many cameras and people showing up to her house, asking her heaps of questions. I think it was cool for her to see a little bit of that side of what goes on behind-the-scenes.

The 'Wheels Of Glasgow' crew!

Alex is supported by our Official DIG Partners: BSD | Vans 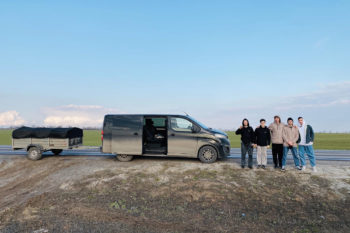