We wanted it to be everyone’s spot, not just “ours” - Joe Camporeale

I know, I’m stating the obvious: DIY is by no means a new concept in BMX. It was essentially founded on this principle, back when a young teenager named Scott Breithaupt organized the first legit BMX race at a vacant dirt lot in Long Beach, California, in 1970, and sparked the raging inferno that we call BMX today. Since then, everything from trails, to backyard wood ramps, to full-on parks, to media of all types, to bike companies... you name it; the DIY ethos has always been, and will continue to be, an integral element in the BMX bloodline.

Yet, despite concrete riding pioneers like John Palfreyman (who slashed both empty pools and pool poacher’s car tires with the true Dogtown crew in ’75) and Jeff Watson (who ripped hips and full pipes at southern California concrete parks with his non-mark-making red tires in the early ’80s), DIY concrete terrain never seemed to take root in bike riding. There have been some outliers, of course, such as the occasional random jersey barrier mods made, a couple of pro concrete skatepark builders like Steve Hare from Canada and Chris “Baboon” Volkwine, and a small handful of full concrete builds like The Spot in London. But for the most part, DIY spots of the concrete nature haven’t really been much of a thing in BMX.

Times are changing. More and more concrete creations by bikers have been popping up in the wild over the last few years, like Clint Reynolds’ compound in New York and the Goat Pen in North Carolina. Both are as legit as it gets, and have a dedicated group of builders/shredders behind each. While not even close to the magnitude in size or accomplishment of either of the aforementioned, a dinky local DIY in Philadelphia called 9th and Poplar is also featured in the following pages. I’ve personally become a part of the ongoing progress there, so there is a little bit (a lot?) of bias with its inclusion here (though, it is the only one featured not located on private land).

Unlike using other types of materials like dirt or wood, once concrete is poured correctly, there’s minimum to no maintenance required from that day onward. That is, if all the necessary prep work is done prior to - or occasionally on - pour day. It goes way beyond mixing up a few bags of substandard concrete and using a broken 2x4 to float some mud. It’s about proper knowledge, proper tools, and proper timing. It requires the correct mix either trucked in or mixed by hand to the proper ratios, and finished to perfection. That can really only occur if the skill and art of concrete finishing is studied, learned, and applied by those willing to create something better than a turd pile. Basically, it means becoming a concrete nerd (which I’m guilty of).

Just like the corner police at trails, those aesthetics resulting from taking the time to learn the skill and art of making a smooth and indestructible surface finish are worth it, on many levels. Nailing all those elements can result in a piece to be proud of, and last a lifetime. Or at least until the city comes and rips out all your hard work!

The following DIY spots to be featured here are adhering to that process to a T. First up was Seamus Mckeon and the Goatpen and now it's the Philadelphia spot 9th & Poplar (and there will be more to follow over the coming weeks too).

Now go grab that mini pool trowel and get at it. -RD

While passing through town on his way to Richmond, Chris Childs decided to take a riding pit stop and proceeded to alley-oop wall ride the piss out of this piece next to the back bowl corner. It’s safe to say the tire marks he put up there are a first, but an occasional odor of piss still lingers. Photo: John Capps

Philadelphia: an East Coast mecca for the BMX and skate scene alike, home of arguably the most impressive DIY spot on the entire planet, FDR, and also quite possibly the birthplace of “skate hate” (or at least the epicenter for supporters of this wretched concept). Amidst the contentious vibes that often plague many spots in and around a place ironically named the “City of Brotherly Love” there lies a DIY that has grown to become an exception to this unfortunate axiom. This is something, aside from the actual spot itself and the progression of the complexity of the features that we build, that I am super proud of when it comes to Ninth and Poplar.

Tucked away beneath a (once way more) grimy bridge, nestled between a subsidized housing tract and a community rec center, is where our spot lives. Ninth and Poplar, a spot that has more name variations than all of the Wu-Tang members combined (I personally loathe the “8th and Brown” misconception the most). Name discrepancies aside, one thing is for certain and must be acknowledged right out of the gate when it comes to the history of Poplar: The spot was started by skateboarders some years before any BMX rider ever contributed. Legend has it that the first tranny was poured on the OG barrier by the 5th Pocket Skatepark dudes with some left over concrete from a local park that they were building. For the next few years smaller obstacles appeared sporadically, but there was no concerted effort to the builds. Like most DIYs, their lifespans are typically uncertain and their existence is often fragile, at best. All it takes is to appear on one wrong person’s radar and the next thing you know your labor of love has met its demise. With that said, no one wanted to be the one who rocks the boat by getting too aggressive with the builds. That was certainly the case with Poplar at that point in time.

In 2015, I moved into an apartment right up the road from Poplar, and had been itching to dabble more with concrete. With Poplar right down the road, it was the perfect opportunity. I ambitiously decided that my first contribution to Poplar would be the slightly hipped bank to bank piece with the wooden wall ride along the fence; a hell of a piece to bite off as my introduction to the world of DIYs. As a BMX rider with a trail builder work ethic ingrained in my ethos, I did not mind doing the grunt work of getting all of the fill and other materials to where they needed to be. Having only miniscule concrete experience from a previous spot, I was ignorant of exactly how much skill is needed to properly finish any type of concrete. Fortunately for the sake of the spot and everyone who has ever ridden it, some of the local skateboarders got in touch with me and we began to collaborate on the specs of the piece. Additionally, we coordinated a day to pour it together. As bike riders, we can get away with riding much sketchier surfaces with our twenty inch wheels and pneumatic tires, so naturally the skateboarders wanted to make sure this new feature was not going to be a sketchy piece of garbage (which, in retrospect, it almost certainly would have been). This was inadvertently the beginning of a model of collaboration that would become the norm for doing work at Poplar.

It was humbling to sit back and observe the masters of the craft flow through their process as they executed the piece: seeing tools I have never seen before, hearing terms I have never heard before, and most importantly, witnessing how much hard work and skill goes into the pouring and finishing of a proper cement ramp. A shout out must be made to the cement guru Sloan. His passion for concrete, patience and willingness to teach anyone who was curious to learn about cement and overall balls out work ethic is unparalleled. His contributions are truly integral to the success of Poplar.

The ensuing years led to more obstacles being made, each one becoming a little bit larger, intricate, and ultimately becoming a part of a grander scheme. Although we (the bike riders) would come up with ideas for what we think would be cool, and ultimately lead the charge in bringing our often grandiose ideas into fruition, we would bounce them off of our friends that skated. Getting their take and feedback on the plan was important to us as we wanted it to be everyone’s spot, not just “ours”.

When it came to a pour day, we would work together and try to learn as much as we could from our cement senseis. Eventually we developed a pretty solid crew of regulars compiled of a diverse line up of dudes. To be honest, I don’t even think anyone knew who skated or rode BMX. Just who was cool and down to help, as it damned well should be. As the years went on and we continued this building alliance with our wood pushing kin, most people started to recognize and respect the joint efforts between both of these parties.

“Although we (the bike riders) would come up with ideas for what we think would be cool, and ultimately lead the charge in bringing our often grandiose ideas into fruition, we would bounce them off of our friends that skated. "

After a couple of close calls and threats about the spot being torn down by the city, there became a need for a couple of “Poplar ambassadors” to step up to the plate and take responsibility for the spot with the parks department. One way or another, myself and a good dude named Andy Vasquez became the Poplar representatives (one representative from each discipline seemed right). We were asked to attend board meetings, community events, and had to deal with the bureaucratic bologna that comes with the territory of dealing with a city. Truth be told though, whatever needed to be done, we were down to do. Ultimately, our efforts led to the holy grail of DIYs and we were granted permission from the powers that be to continue to exist and grow as long as we stayed within our bounds and followed a few rules.

At this point in the Twenty-First Century, history has taught us again and again that there is no room for prejudice, discrimination, or segregation. This should apply to all facets of life, including the niche subcultures of “extreme sports.” Things are just better when we put those preconceived notions and menial differences aside and focus on what matters. This is certainly the case for Poplar, as it would undoubtedly not exist as it does today without everyone working together to make it happen. Whether it was a “lead by example” approach or something else, the “skate hate” seemed to lessen more and more with each build. The mutual “yeahs!” seem to become more abundant and the overall vibe of the spot has become more and more inclusive with each year of Poplar’s existence. Ultimately we are two sides of the same coin and we all look equally as dumb in the eyes of most “typical adults” who do not ride or skate. 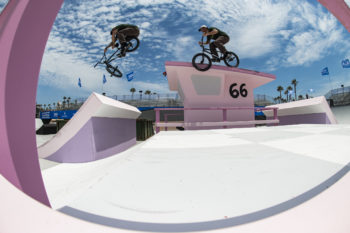 Arguably the highest level of BMX seen this year! 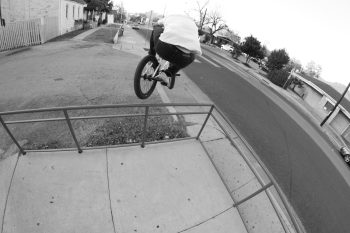