Hammer Time in The Desert With Nathan Williams and Aaron Ross

I really had no plan or notion that I would ever end up on a trip with the etnies crew especially while filming for their upcoming DVD Chapters. When my good friend Neil came up to me during Nora Cup and asked what I was doing after Interbike, I explained staying around Vegas for a few nights to see a good friend. He asked if I would stay an extra few days to shoot with Nathan Williams and Aaron Ross for etnies in Vegas. Being from my generation of BMX where a copy of each of the etnies videos has and always will be kept heavily guarded and held to such a high level, of course I said yes and jumped at the opportunity. Despite some admitted nervousness as I had only met Nathan, Aaron and Povah a hand full of times, luckily good friend Will Stroud was at the helm for filming. Not to mention, living in Vegas some years back and making frequent trips to see friends, had left me dreaming of shooting at some of the spots I had found and some I had never reached too.

Luckily for us this Janitor was quick to tell us how we "aren’t allowed there and need to leave" promptly followed by the “I don’t care though I gotta go do my job” giving Aaron a quick window to get the line that was still haunting him from the day before.

With the Vegas sun setting, heat wearing on us fast and the horrible run up to start this line. We decided to come back to this spot when Aaron was fresh. Which led to him getting a sick line to finish with. You’ll have to wait for the video to see the full line and what got done out of this hefty Vegas out rail.

Needless to say, once I hopped in the van any nervousness was thrown right out the window immediately. Like most BMX trips, the good times just kept on rolling. Maybe it was the fact that I quickly realized the self proclaimed 'Salty Bastard' John Povah (enties TM) is not (that) salty at all and actually quite spot-on with his witty comments. Aaron kept the good times going with his humor and non-stop pushing through the heat to get the clip exactly how he wanted even if the spot didn’t want him to have it. Nathan’s persistence and desire to ride any spot no matter how much work it takes to make it rideable is something to be admired by everyone, not to mention watching first hand him one upping himself on two different setups within an hours time. After all this wasn’t a trip just to stack clips and put out as much content as possible as fast as possible. Instead, this was exactly how any trip filming for a video should be. Look at any and all spots you may want to get for the clip for the video you where thinking of; then picking your battles wisely to avoid the deadly oven of Vegas heat. Luckily for Nathan and Aaron by the end of the week both left with numerous clips anyone would be stoked to have in their video section. Overall despite the heat, losing our friend Neil the night before the trip started. Vegas was amazing to all of us, leaving us without a hangover but rather some well deserved clips, good times and new friends. When's the next trip Povah?

Maybe it was just me but the second we got out of the van I was instantly was covered in sweat. We had planned on just looking at this well ridden Vegas spot and coming back at night. But with a sign that said “Closed till 3:00 PM, blame the economy” we decided to give it a go while we had the time. Nathan had a trick in mind for this spot but ended up taking it pretty bad on a few attempts while still walking away with this warm up tooth over dubs to over 180.

"After all this wasn’t a trip just to stack clips and put out as much content as possible as fast as possible. Instead, this was exactly how any trip filming for a video should be."

The look of love? Aaron attempting there hand at smooth talking security into passing by so Nathan could pull the line he was in the midst of trying.

This was one of the first spots of the trip that we rode. Despite it being in the blazing heat of the afternoon and after calling it quits for a moment, Nathan quickly found the energy to give it another go and pulled this feeble to over tooth pop over all the way to the end.

Aaron pushing through the heat to end a line with Will in tow, in just enough time to avoid the police who were supposedly on their way.

Aaron seems to have the perfect moments for fun, and heckling Will.

“I hit record Will that button right there I hit it, I don't know where the clip went”. Well sometimes second angles don’t always work out after all luckily Will got the proper angle nice and smooth.

Say what you want about Vegas and its supposed lack of spots, but with constant construction, progress and change ,always comes new spots. This one was found simply cruising past and onto another spot. At first it seemed like the spot had somewhat of a tight and long run up but Nathan thought otherwise and after a few kind words by Will to the security guard we quickly were given the green light to enjoy. After hopping it once Nathan wasted no time and jumped right into it making this huge switch 180 rail hop to gap work... despite a few rough tumbles with the blazing asphalt.

UNLV has and always will be a bust, but less face it so is almost every campus across the states. Unfortunately the local authorities rolled up right in the middle of Nathan working his way through something. Here’s a quick 180 from his first few run ups feeling out the end of the line.

Aaron’s constantly pushing himself to get the trick just how he wanted showed through in this one when after a hour of battling for the proper line up I somehow managed to shoot the suicide a split second early. Too my surprise Aaron went right back into doing the trick maybe ten more times before getting the pop and the no hander to feel and look just as he wanted it to.

"After the battle of a lifetime to get the generators running a few nights before, Povah worked some sort of voodoo magic and got them going."

Being a filmer is never fun you are constantly at the butt of your friends jokes. Will Stroud posing for his highly demanded social media sunset picture whilst Aaron drops the hammer. 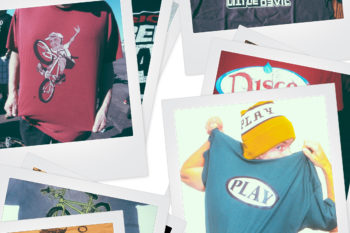