Heard the one about Mary Poppins and the Japanese Bullet?

There’s few better ways of getting to know someone than sitting at a street spot for hours whilst waiting to finish filming a clip. Shooting the shit is an important part of staying motivated on a long all day slog. This series of photos was shot in London UK with Ollie Shields, whilst himself, Chase Dehart, Alex Kennedy, Veesh and the capital's top spot guide, Tonash (Toby Goodyear) were on their usual dip and dive around the finest brick housing estates in search of not just clips for Ollie's signature frame promo but final clips for CULT's 'It's Later Than You Think' DVD. I joined them for a couple of days to shoot and hang out, and managed to catch a couple of tales from Ollie as we sat and chatted on street corner after street corner.

I got a call from Mike King telling me about a chance to do some riding for some scenes in the new Mary Poppins movie. I was a bit sceptical – we get offered these kind of gigs quite a lot and I just thought, do I want to take days off work just to get let down as often happens with things like that. I went for one casting and they had us do some bunnyhops and manuals in the car park. A bit of time went on then I got asked to another interview, which I actually never showed up to it. I just thought it wasn’t going to happen so never bothered going along. I ended up getting a phone call from Ben Dimmock who was our stunt coordinator at the time, and he said that my name kept popping up and could I come in to chat again.  The next day I went up to Shepperton Studios – it was myself and Issac Lesser and we had to ride these two quarters and a little curved wallride. I did a quick warm up air and then a tailwhip air, and immediately he said, “Yup, you’ve got the job!” So that was that.

We had a month before Xmas when we were meant to be rehearsing at Shepperton and we ended up just sitting on crash mats for 12 hours every day getting paid. The day to film finally came and when we showed up they gave us these 24” inch cruiser bikes and told us to go and do all the stuff that we’d been doing on our normal bikes. I’ll never forget, there was this massive curved down-rail setup with a kicker at the top which would be gnarly to do on a normal BMX an any rate, but they wanted us to double peg this huge rail on the cruiser bikes, synchronised to music with myself and Issac riding in sequence.  - Anyway, it got to the last day of filming and we had to do a stunt on this 40-foot-tall scaffolding behind the set, dropping in to a super tight vert wall that was probably like six foot transition and four foot of vert wall. That led into six foot of flatbottom and then a six foot takeoff, then transferring left onto the roof of this greenhouse, and off that into this makeshift landing. It was Bas Keep and I. We filmed it about 20 times in the end but they wanted one more for a close up shot of us. Bear in mind we were riding super close to each other

I was right behind him pretty much touching wheels. We tried it again a couple of times, but he came off once or twice and I went over the bars. We tried again and I ended up hitting the kicker, boosting past the greenhouse landing and missing it completely, went over the bars and flew back first into these railings. In all the other shots they had mats laid out against the railings, but because of the angle of the close up they took the mat away and never ended up replacing it. They could have green screened it out but they just didn’t bother putting one in there. I knocked myself out and when I came round, everyone was around me. This woman was holding my head, and my arms were being held straight. I didn’t know what was going on but I knew I couldn’t feel my left arm. It was scary.  They got me into an ambulance but in total they ended up closing set for four hours because everyone was freaked out and they thought it was too gnarly to film again straight away. Bare in mind that there were about 150 people on set – afterwards the guys figured out with all the people in there, what they were getting paid and things like that, and it worked out that it cost the movie an extra £900k or so! I think I hit a nerve in my back super hard or something, because as soon as I got in the ambulance and they fed me with morphine I began to get pins and needles in my arm, and then slowly got some feeling back.

It got even crazier after that though. I arrive at the hospital and because I was technically a trauma patient there were a lot of people around me as soon as I got in. I’m laid in this stretcher and they instantly cut all the clothes off me and the first thing the doctor did, instead of ask me something like “where does it hurt?” he just grabbed hold of my dick and started waggling it about. I was like, “Woah, what are you doing?!”  That was his test – grab a nob haha! I just thought, I haven’t got a bad dick, I’ve got a bad back! I remember looking up at Declan Brooks who was there with me and he was dying laughing. It got even worse though -  next thing I know the doctor has got his finger in between my butt crack and he’s asking me to clench my bum cheeks to see if I had the use of my muscles! I think I just got violated haha. I ended up going back to set full of morphine.

"They got me into an ambulance but in total they ended up closing set for four hours - It worked out that it cost the movie an extra £900k or so..."

It was a good few years ago now. I went out to Oregon with Vans for a trip riding skateparks. We were sat at an In and Out or some burger place when I look out the window and see a big fucking bullet on the ground. I picked it up and thought no more about it, sticking it in my backpack. Straight after the Oregon trip we went to the Vans comp and then back home to the UK. I was home a week or two and then flew to Barcelona with the same bag, oblivious to the fact I still had the bullet in there. I had no problem coming home on either trip.

Then a few months later I got asked out to a G Shock event in Japan – it was a pretty good gig to be fair. All we had to do was ride this crazy disco thing for 40 seconds. There was a UK team (Alex Donnachie and I), German team (Fernando Laczko and Bruno Hoffmann), US team (Tyler Fernengel and Devon Smillie) and then a Japanese team. We did that for a week and then had eight days riding street. It was the day before I flew out early the next morning, so I thought I’d just stay up and have a few drinks hoping that would help me sleep for most of the flight. Bruno and I ended up getting a couple bottles of red wine. Bruno said, “Let’s go get a massage.” I was like “Why not? It’s three o’clock in the morning, but yeah let’s do it.” We get to the massage place and I ended up falling asleep mid-massage. The next thing I know, I’m getting a phone call from the Japanese fixer saying, “Where are you? It’s 6am!” The parlour just never even bothered waking me up haha. I was pretty hammered, so maybe they did try! I ran back to the hotel to pack up my bike etc.

The fixer said he’d come with me to get me on the right train to the airport. If you’ve ever seen  a Japanese train map, it just looks like hashtags everywhere. He took me to the main station and got me to the train. It was so busy that I ended up getting pushed into the carriage by staff, with my bike bag and everything. It was so tight in there that I missed my stop for the airport! I was running so late. Anyway, I ended up getting back to the airport, checked in, went into security and my bag got pulled aside the first time. In my head there was no way I had anything in there so I was like, “Yeah go ahead, check my bag.”  They put it through the machine twice until he asked if he could tip it out. The guy tipped it out and as he did, the bullet that I found in Oregon fell out and bounced off the table and rolled across the ground! At that point my heart sunk. I totally forgot about the bullet to the point that I thought someone else had put it in there.

Next thing I know, there’s four police officers and eight security officers stood around me. They took me to a room and asked me so many questions. How I’d got it. Why I had it. I had two translators who could hardly speak English. I asked them, “What’s going on?” and she just said, “It doesn’t look good.” I had to fly in 40 minutes… I knew how strict Japan was so I thought I was fucked.  - Twenty minutes went past and they were still measuring the bullet and taking details. By this point I was sweating and convinced I wasn’t leaving Japan. The main guy then walked over to me, held up the bullet and bit it, saying “Fake. Fake."  After all that, it turned out the bullet was a bloody fake. My name was getting called out over the speakers so I just ran the whole way to my gate. I was never so stoked to get on a flight.

In my head there was no way I had anything in there so I was like, “Yeah go ahead, check my bag.”

* Loosely based off the DAK Frame

* Made from revised 100% cult classic tubing for increased strength * 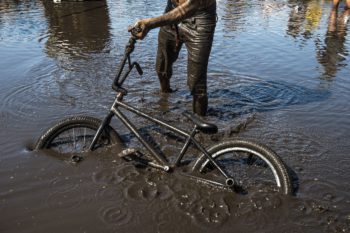 Motivating BMX from the core 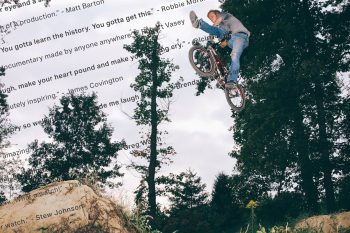 What are people saying about the Jimmy Levan Documentary?

The reviews are in!