UK Photography against the grain

In a world obsessed with followers, shares and fucking selfies it's always refreshing to see someone going against that grain and shrugging off the ego-centric social pressures of the modern age. It's not for everyone though... Instead of posting photos of broccoli or vaporisers on his Instagram account, Mutiny team rider Sean O'Connell is cutting about in South Yorkshire UK shooting black and white film photos of (actual) bus drivers, bleak riding sessions, wastelands and washing lines. You can almost smell the coal. We caught up with Sean to find out some more about his photography, shunning digital, and those all seeing Eyeballs of his.

Where are you from? Age? Years riding?

What drew you to BMX?

I skated for about five years, then everyone bottled it to drive cars and take 'roids. So I got a Ruption complete bike off a mate for £5 and started riding about with some scallies and it took off from there.

Who and what inspires your photography?

What got you into taking photos?

I got into it at Uni and realised it was the easiest way to blag myself through it. I wasn't bothered about it that much then. Photography meant I didn't have to be inside Uni that much and I could go mooch about and ride with my mates whilst doing work. Spot on for me.

Where does your preference for black and white come from?

What type of camera equipment do you use?

An Olympus MJU 1. Its a point 'n shoot film camera so its easy to use and a stealthy brother. I'll get a better camera one day when i have more cash.

Why do you shoot film? It's an expensive process compared to other options.

I started out on a DSLR but I think digital stuff looks stale compared to film. It's deffo more expensive but its worth it. Joe Bailey kitted me out with his old photo enlarger and all the dark room gear so i've got that set up in my basement which saves a lot of money. It's sketchy but once you get hang of it you can print some belters on it.

Does shooting BMX interest you as much as non riding stuff?

If its my mates or people I look up to yeah, but I'm not gonna go around trying to get a photo of some tool to send into Ride (UK) mag and make a quick tenner. They're not worthy of Broth cam.

Are there any BMX photographers out there whose photos you do like?

Joe Bailey and Ricky Adam. These two pretty much taught me everything I know. I go on missions with Joe and he'll explain what he's doing and why, and all that stuff. It's mint. I go see Ricky quite often when he's at work just to hang out and look through his books and that. He's like an Irish Yoda or summat. I owe a lot to those two. They both shoot film and a fair bit of black and white, even when there doing commercial stuff they keep it raw, and thats what its about really.

What have you got planned for this year?

I've had an exhibition on last month at Tall Boys Beer Market in Leeds city centre. Once my exhibition's over I'm curating the gallery space they have there. It's the sickest place; dirt cheap beer that'll knock your socks off and a mint space to show local artwork. No snobbery or trendy beards. I've got a couple more exhibitions coming up this year in Leeds and London. Quite posh eh? 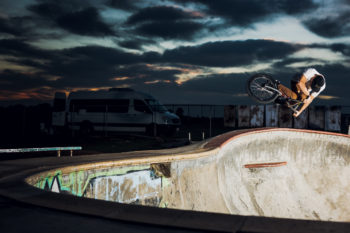 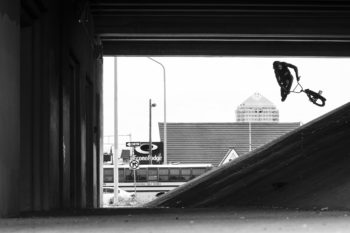 Friends Through The Lens - Wes McGrath

Getting up close and personal with the Albuquerque riding scene