Re Print: Rooftops... and everywhere down below.

Without doubt, the most difficult article I have ever photographed for DIG...

Without doubt, this has been the most difficult of all the articles I have ever photographed for DIG. Not so much with the photography side of things, but the sheer amount of hassle I ran into with police, security, the general public, as well as the obvious dangers involved when you’re basically trespassing on the roof of someone else’s property in the UK.

Just getting onto some of the roofs was often a task, and in some cases frustrating when you discover that a roof is in fact un-rideable. Needless to say there were many obstacles that got in the way. I’ll not even get into weak roofs or the dangers of scaling half fallen down structures, but I will mention that jacket & jeans I totally ruined (thanks to anti vandal paint) as well as the hours of standing around looking shady waiting for businesses and schools to close. If I’d shot this article in the U.S., I’d probably be typing this from a prison cell.

This had to be an early morning job. I set my alarm for 6am and drove to Chester to meet up with Owain close to the roof. Owain climbed a wall and made his way across a sketchy corrugated roof section until he got to the part he wanted to ride.

After a few goes and a few different camera angles we heard police sirens in the distance. They couldn’t be coming for us? We got out of the area and made our way back to the car. We looked back to see 3 police cars parked up outside the building we’d just left. Great! We quickly got in our cars but as soon as we did a police car rounded a corner and apprehended us.

They took our details and a statement and miraculously let us off with a warning. Apparently, someone had called the police and said that there was an injured person on the roof. Owain went over the bars a couple of times but got right

You seriously don’t want to be caught by the local drug lords g-turning on the roof of this docks warehouse. Bengo, g-turn.

There were a lot of contradictory rumours concerning this particular roof. Some said it was a Chinese restaurant that had gone out of business, others that it was still open; “it’s a Pizza Hut, no wait, it’s a Subway... or is it a coffee shop?” “...What, that place with the weird roof? That closed ages ago...” The only way to be sure was to go there and see it for ourselves.

The plan was to meet up in the car park and hope for the best. Driving down the motorway I knew I was getting close, and as I turned a bend there it was! Almost immediately the color drained from my face when I saw the huge ‘Little Chef’ sign staring back at me. I pulled into a vacant spot at the far corner of the car park and started swearing at volume, thumping the steering wheel of my Ford Focus.

For those who don’t know, Little Chefs serve up the world’s shittiest food imaginable, 7 days a week. They open their doors really early in the morning and shut really late at night. This one has CCTV cameras and is just off a busy motorway. I needed for all 4 lanes of traffic to be clear to get a good shot. The car park was full of cars and of course the restaurant was full too (you can’t really see in the photo but the car park is to the left of the sign).

To cut a long story short, Rich arrived about 5 minutes later and we decided that we had no other option than to just go for it.

This ‘had’ to be a daytime shot as we needed daylight. I reckoned we’d maybe get 3-4 minutes before getting busted, but it was more like 2. Within the first minute Rich fell off and he and his bike clattered down the roof. The people in the restaurant must have been wondering what the hell was going on. The ceiling inside is the same shape as the roof so they definitely would have heard something. Luckily, neither he nor his bike slid off, and he got straight back on, busting a few airs back and forth, getting higher with each air. I was on the opposite side of the road hiding amongst some trees and could only watch as the manager along with 3 colleagues burst out of the Little Chef looking up at the roof, while people in the car park gawped up at Rich’s antics. I even saw a guy driving past on the motorway taking a photo on his camera phone!

By the time the police were on their way, the shot was in the bag, and we were out of there.

Lacey slipped a pedal and won himself a mega sore shin along with a totalled back wheel on his first attempt but after a new wheel was slotted in it was all gravy, so to speak...

This roof involved Gav going on a mission the night before the drop. It was too bumpy to ride, so he was on the roof laying down sheets of plywood in the dark to make it rideable. We arrived at 10.30 the next day and on the first try Gav crashed HARD. But he got straight back up there and hit it again just as two old ladies came doddering out of their house screaming something about, “God’s place of worship.” By then it was all over...

This particular roof didn’t attract any hassle but we sure as hell got caught on the CCTV system. 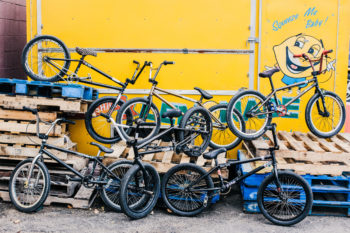 The Bikes of Bone Deth 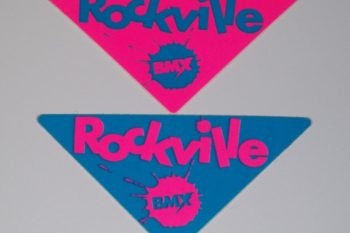