Re Print: What the Fuck Happened to Spots?

The Secret Spot hunter tells you what he's really thinking...

Seriously. This is bullshit. What the fuck happened to spots, and places to ride that you can’t find everywhere? If you don’t know what I’m talking about then we’re gonna have to dial your cathode ray lobotomized brain to 1.21 gigawatts to a time before the modern skatepark boom and that thing called the Internet fuelling a blended, sedated, cookie-cutter riding environment. What am I, some old jaded festering curmudgeon fuck on an S&M menstrual cycle? (I’m gonna flick you in the balls Moeller - I don’t know Moeller) That’s right, saddle up 'pardner', this ramble is like we’re going for a pedal and have no idea where we’re going, where we might hop fences, ride pools, explore abandoned buildings, find ditches, mix bags of cement, make our own spots, carry our bikes till our arms hurt, trespass on government property, break the fucking law, do something other than be pacified by the freedom-stealing-soul-sucking, fenced, contained, homogenized and surveillance substitute confines of a skatepark that breeds people that ride the same, look the same, and think the same. Please don’t make the kooks in BMX the minority, let people think you’re a weirdo, make someone mad and beat them at their own game by loving love, stepping out of your comfort zone, having fun and actually give a shit.

My preliminary observations of the modern street evolution have lead me to believe there is a bizarre “this will one up the web-based Jonses when they see how many stairs I did whatever who gives a fuck down that landing looks like shit and it probably would have looked better if you’d just straight bunny hopped it thing” going on. (Who the fuck was the rat-fink dickwad who named that action a bunny hop?) K.O.S. Over and out. If you’re going to go walking speed at some boring flat ledge all day over and over again, you might as well get a trials bike or a razor scooter with 20” wheels for your pogo grind web edit, or have your bike stolen by someone who looks sketchy because maybe if they have a bike they’ll actually ride it like it is one. Ride stupid weird shit that is an adventure to get to, just be sure you always obey the signs. It’s always no, no, and no to everything in life I’m actually not even sure what the rules say I can do anymore. But it’s just to keep us safe they say. Don’t worry it’s been disinfected and engineered and is always going to make our lives better. In the name of progress, the plastic shellacked charade of this costumed masquerade called the curtain call of humanity marches on. Head shake subject shift, that’s right, take it... who are they and when will it all make sense? Or take life by the reins and tempt the Huffy puffy MJ-12 illuminati powers that be by doing something for yourself, before it is deemed safe and spoon-fed to you, and make your own damn spot. Use cement, scrap pallets, dirt or whatever to change things for the better. Who cares if thecomeup doesn’t invite you to their birthday circle jerk. Land into grass, use a kicker ramp, do whatever you want. If it’s there ride it. - Ryan Worcester

Obviously there's a lot of creative spot hunters out there nowadays from Tate Roskelly to Erik Elstran and many more of course... but this guy was one of the originals and he's still out there serarching. Owain Clegg, North West UK, circa 2007. Photo by Ricky Adam 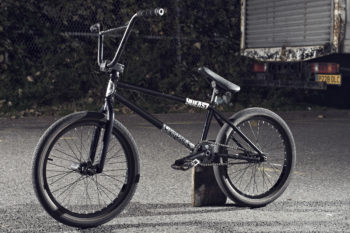 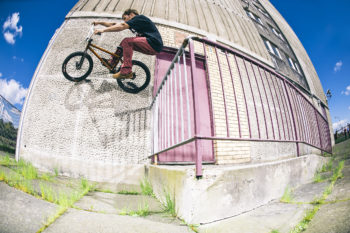 17 random questions with one French hippy...