It's not very often you get asked to help out with the design, dimensions and graphics of a new frame, so when Ian Morris at United comes asking you've got to be excited. Tom Sanders was that lucky guy and the Region is the culmination of their combined hard work and experience. This northern England BFG has been carrying out street assassinations on spots all over his home turf of Hull and beyond for a long time now and since he's made the move down to 'the big smoke' (that's London to you) he's doing exactly the same, although now he's paying £5 for a pint afterwards. We tracked him down in the depths of East London and found out some more about United's latest addition to their frame lineup.

How did you come up with the name 'Region'?

By process of elimination really. I didn’t want my name on the frame seeing as that’s not going to help it sell! I thought it was best just having a plain name that pretty much means nothing in regards to bikes but can still be associated with “street” riding. Region means “a continuous part of a surface, space, or body. A region of the earth.” Maybe I looked a little too deep into it, its just a frame!

What were the main features you wanted included in the Region frame?

I rode the Dinero frame for years before this frame and although I liked it I found it was too twitchy for me so I wanted something a little bit more traditional by having a slightly longer back end and slackening off the head tube. I felt like it made you feel like you were more in control along with bringing the stand over height back to were it belongs.

You're a big lad, did that have any influence on the dimensions?

Pretty much; I wanted to have that traditional box looking frame rather than the scooter style that keeps popping up. Nothing looks worse in my opinion. I think the nine inch stand over is better for lurch-like people.

United Region Promo filming in progress via a boneshaker - London style. Rail 180 captured through the VX by an injured Marv on the pub bike.

What’s the story with the graphics. How did those come about?

The graphics worked out sweet. I got my mate Pinky to do them as I thought it would be nice to get an artist on the case, especially one who is originally from my hometown. Amongst Pinky’s psychedelic skulls he incorporated the Hull and London skyline seeing as I’ve just moved from one region to the other. I know Pinky was keen to go a little bit more creative on the graphics but I thought they looked cool toned down. Check out his other stuff here: www.pinkyvision.com

Talking of regions, you moved from Hull (North England) to London (South England) a few years back. How's life going down there? Is the scene much different? Anything you miss?

Yeah life down in London is good. It’s fairly different from back home in some respects but for now it works. I managed to get a job working at a school that gives me a load of time to ride along with having the capital to mooch about. The scene in London is not massively different, it's still a group of mates ripping each other whilst dicking about on bikes. I was already good friends with Marv, Benson and Richie so it wasn’t like I had to mill about finding people to ride with, in fact it was because of them plugging the idea to me that I moved down. I still miss not been back home but that’s mainly because of not getting to hang out with my mates from there.

You do an incredible Miley Cyrus impression, any chance we'll be seeing that in an upcoming Region promo?

No Comment… Not unless Rushmore is going to start it off again.

You can always rely on Sandy for a good smith grind. Here's the downhill run-up, precision placement variety.

This wallride over the electricity box is plagued by an awkward approach, and has been looked at for a god while by various residents and visitors to the city. Looks like Sandy drew the short straw.

Well have a #UnitedRegion promo vid coming your way soon but in the meantime head over to unitedbikeco.com for updates and more info. 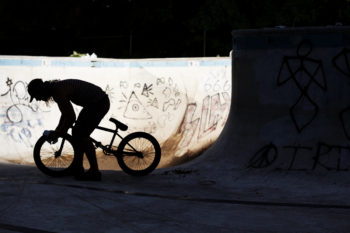 A re-introduction of sorts for "one hell of a fucking ripper"... 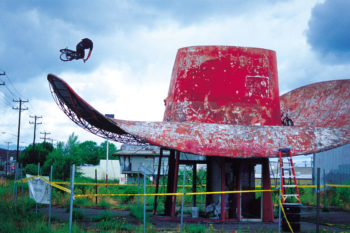 Re Print: What the Fuck Happened to Spots?

The Secret Spot hunter tells you what he's really thinking...