The Yea kicks off a video series by Ride PA BMX

DIG is proud to present the first section of 'Quaker State' a Pennsylvania based video series produced by Ride PA BMX, bringing together riders and crews from across the state.  The Yea crew hold down introductory part honors, and kicks things off in a great way.

"Nearly a year ago, Matt Smith, Sam Downs and myself began to discuss the potential of a video for the Ride PA BMX website as a 'push' into producing more original content.

Matt came on board as our graphic artist and Sam as our in-house video editor. Both played vital roles in the production of the video.

We setup a private Facebook group to open a line of communication between all the parties involved in the project. We also setup a One Drive account to transfer graphics, photos, footage and the finial sections of the video.

We hope you enjoy."

"Purcey asked me to do the graphics and I agreed before we even had a name for the project. I was psyched to represent Pennsylvania. We were shooting names around in the fb group chat and I threw out Quaker State and everyone seemed to dig it or not mind it. I mean, the first thing you notice when traveling here from another state is you can't buy alcohol at gas stations and other places. I thought it seemed fitting.  I worked up a graphic with the motor oil in mind. Found an old school map of PA and threw it in there for good measure. The name graphics were important in giving the whole series a consistent feel.

For the yea's section, I really wanted to show Harrisburg as a the capitol it is and not just some shit-dick city no one really wants to live in. The drone shots were done by my cousin Marc Sechrist @rtownstudios. We orchestrated with the crew and mobbed downtown at the crack of dawn. Very happy with Marc's work and I don't think the video would be the same with out it." 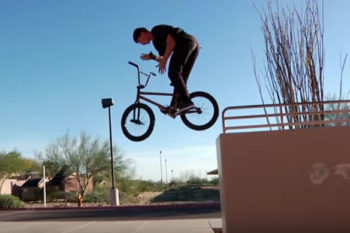 Patenice and BMX Salvation in the Dessert 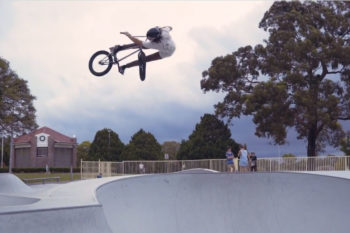