BSD's latest visual masterpiece, 'Transmission' is currently in it's hardcopy to online transition with sections being uploaded to the web each week, so we thought we'd do the same and post an article originally printed in DIG issue 99.5 . Whether it's being chased by a machine gun toting French gypsy or having babies, a lot can happen in the space of filming a full length DVD. Here's some from Transmission that you probably didn't know...

1: Alex Donnachie was on the most DVD filming trips out of the whole team (eight) but used footage from two of the trips (Israel and Santander) to film for his ALVX frame promo.

2: Jersey first tried his curved wallride ender when BSD were on the 2012 Ride to Glory but the wall was too rough. It took three more trips to the spot over the next three years and a crash that kept him off his bike for three months before finally getting it on camera for his part.

3: Sam Jones' diet of microwave curry and beer should have a health warning but it was good enough for him to try Glasgow c-ledge line for four consecutive nights and for a total of eight hours before eventually pulling it for the camera.

4: On the second last trip in California, Liam 'Leezy' Zinbergs broke his six month long stint as a vegetarian after visiting In 'n' Out burger and ordering the Double Double. He later said that being a vegetarian while in America was a wasted opportunity to eat good meat.

5: Half way through filming for the DVD Dan Paley seriously dislocated his knee snapping three of the four ligaments. Luckily for his DVD section he had more than enough footage. Also through a strict diet and a good physio regime he's made a miracle recovery and is back riding now in under a year which is pretty unheard of given the seriousness of the injury.

6: Luc Legrand and Reed Stark were filming with Antoine Sabourin in Bordeaux, France when they got chased from the spot by a 'gypsy' with a machine gun.

7: In Shanghai DBG bought an authentic Chinese jacket in size XXXL off their version of the internet and it still looked like a crop top on him.

8: Mike 'Jersey' Taylor became the first BSD team rider to become a Dad when baby Scarlett was born in November 2015.

9: Kriss Kyle got 29 tattoos in the time this DVD was filmed. These included a racoon, some lions, a shark, and probably a few wee bears.

10: Transmission is the first full team DVD that BSD has produced. There have been two previous DVDs; 'Any Which Way' in 2012 and 'Living for the City’ in 2013. The first BSD video 'Stress Kings’actually came out 25 years previously in 1991. 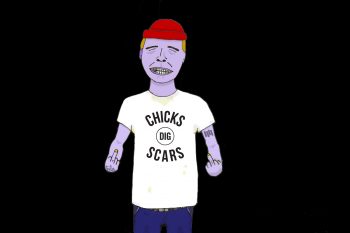 10 Of The Worst Mainstream BMX T-Shirts We've Ever Seen!

There Are People Out There Wearing These.... 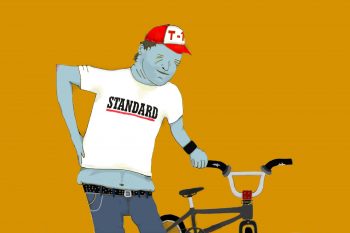 30 Signs That You Were A Mid-School BMXer

If you don't understand then you just weren't there