A Change Of Circumstances: Ty Morrow On Eclat

It's not very often that sponsorship changes really shake the boat but when it comes to one of the best street riders in the world with a history of brand loyalty, we had to find out more. So, Primo out, Eclat in. We followed up with Ty before he set off for X Games to chat about his decision.

Ty grabbed a few hours between getting his new Éclat parts dialled in and catching a flight to the X-Games. He handled this like a Pro.

All's been well. Just trying to keep busy and maintain.

So let’s get straight to it... Eclat. Can you explain how the move came about and some of your reasons behind the switch from Primo?

After a couple of odd years at primo, I got an email from the operations manager of Tip Plus, Rich Hirsch, on March 1st, 2017. He explained that our contracts did not go through because of a death of an employee that was supposed to sign our contracts after the riders and Rich signed off on them. He told us we would have to start submitting invoices to receive pay and warned us major cutbacks would be made June 1st..

Mind you that up until this point, I hadn't heard shit from Primo in 2017. The only thing we’d done as a brand in any recent memory was the Primo blazers trip in 2013. An “expense” we were eventually told was very excessive and was unlikely to be repeated. Multiple team cuts and 2 or 3 false promises of trips and travel plans later, Primo still isn’t doing shit and has no plans to.

This has all been very unsettling to me. I've never been asked to invoice my "work" representing a company in the 10+ years I've been a pro BMX rider. I never submitted an invoice and still think the entire thing was set in place to give Rich further reasoning to lay off riders or cut their pay come June. He literally stated that failure to follow these new instructions would directly affect the renegotiation of our contracts.

I found out how much I would be making and also heard rumor of what the rest of the team would make as of June 1st sometime in May. It disgusted me. Most of the team had their pay cut to 1/3 or less of what they were making before. Fuck what you’d done for invoices, this is what it was. The fact that some of my friends can hang onto representing a company that is doing NOTHING for our industry frustrates me. How the hell did BMX get to this point? What is going on here?

These are all questions and thoughts that have rummaged through my head the last couple months. I grew up watching Primo videos and have always had a high level of respect for the brand and the way they seemed to run things. To say things have changed would be an understatement from my perspective.

However, when you look at Primo's history, you may notice a pattern of "big name" riders coming and going.

I believe this is due to the owner of Tip Plus’s actions. He sees a decline in the company, has someone come in to fix things up and then fires said person and makes salary cutbacks after the cushion the old brand manager set starts to wear thin. The guy could really care less about our personal lives or the direction of the company and it’s just sad to see the saga continue. If the owners don’t want to fully support BMX and those that keep it alive, then they really need to just be done with it. Quit using us as a tax expense and figure out something else to do with the excess money you make from the wheelchair company that houses Tip Plus.

This industry is small. If you’re not 100% behind BMX you need to get out and stop fucking it up for everyone else that wants to build shit the right way.

There aren’t many parts companies in BMX. Of the few that exist, I really only saw myself riding for one other team/brand and that was éclat.

I’m already good friends with a few of the dudes on the team and am excited to travel and work new projects with those on the team I’ve only hung out with a few times.

Eclat has stayed true to the foundation in which I feel modern freestyle BMX was built on and needs to maintain. Filming VIDEO PARTS, going on TRIPS and having GOOD TEAM VIBE are all still very crucial aspects of making a good company in 2017. Those of you that have began relying on your individual rider’s social media network and vlogs need to reassess what you are doing.

What roles do you believe a sponsor should fulfill?

First and foremost, I think honesty is a big part of any relationship. Companies need to be clear about what they are offering their riders and what they expect in return.

I feel as though a lot of companies have steered towards the idea that the rider is responsible for how they represent the company with little to no actual managerial instruction. As cool it is to fully embrace the independence of BMX in this way, it also leaves companies looking less like brands with teams and more like companies with ambassadors that just do their own thing apart from others involved.

Have you got anything planned yet with Eclat? Trips? Parts?

To start things off, Calvin Kosovich and I are working on a “welcome” edit for the next 2-3 months. We’ve got a little travel budget to work with so we’ll probably do a couple NorCal trips or something like that since it’s kinda too hot to go anywhere else right now haha. Once that’s done with, there’s talk of flying me out to Frankfurt to kick it with Bruno for a couple weeks and maybe head to Cologne to chill with some of the dudes at the warehouse. Éclat’s just put out the edit from their annual team trip, so unfortunately I missed the window on getting on a big team trip this year. I can’t wait to find out what’s in store for the team trip next year though.

In terms of parts, we’ve definitely started talking about getting a couple things rolling, but nothing is official yet. More on that soon!

Ty is riding the Ak guard and Tibia cranks.

Honestly the engineering of everything is so on point I’ve just been stoked on all of it! If I had to pick one part in particular I would have to say the cranks. I rode Tibia cranks for years before I had a parts sponsor because it was the only crank I could trust not binding on me! If they can take the abuse of the shit Burns puts them though, they must be tough.

Now TripTape is making it’s way online, have you got any other full-length video plans?

In terms of video projects for Trip, I would like to keep things a little more simple for the time being. Gonna try out a couple of my HD cameras before their technology is irrelevant and aim for more consistent content rather than holding everything for one big project again. Give that a year or so and see how it goes then talk to the guys about working on another full-length.

Anything in the pipe line with The Trip?

We just dropped the Summer ’17 collection and I’m about to get that distributed around the world so be on the lookout at your local shop! Aside from that, I’m hoping to evolve the company into more cut and sew and overseas production towards the end of the year. Working with American vendors is great and all, but it can be costly and it’s hard to get things exactly the way you want them.

When are we going to see a Snowboard section from you?

Haha maybe next year! Holler at me Lib-Tech!

Ty and his new Éclat fuelled Fiend set up. 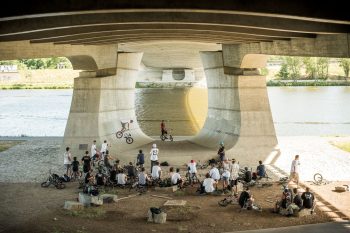 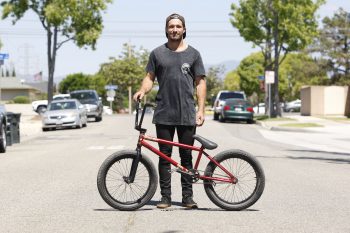