All about GT's "Can You Film This?" with Jeff Z.

Plus a bangin' photo gallery by Z.

GT just released their latest full-length follow-up to 2017's Seriously Fun titled Can You Film This?, and legendary photographer / newly established GT TM Jeff Zielinski was at the helm of filming and editing the project.

Z's skills go way beyond his amazing photography. He's also handy with a video camera, and has played a major role in filming and producing multiple videos during the late 90s and into the early 2000s, including Don't Quit Your Day Job and Animal 1, both of which arguably had a profound influence on modern-day street riding.

Just prior to the CYFT online release, we caught up with Jeff and got a little insight into making the video.

How did Can You Film This? come about?

We had just begun working on an entirely different full-length video. We secured Ryan Chadwick as the sole filmer, trips were planned, tickets were getting booked, the gears were in motion… With a long road ahead for that video, in the short term, I thought it would be cool to have the team work on something with a quicker turnaround. Both to fill the void, so to speak, while the big project was underway, and because the team was filming solid riding for Instagram daily and I figured we should build that footage into something greater. In contrast to the polished full-length Chadwick was going to produce, we encouraged the team to film with whatever HD camera was available... iPhone, DSLR, camcorder, etc… I shared the idea for the video in a group text on Nov 29th, 2019, and Albert Mercado, being the clever guy he is, suggested the name Can You Film This?

Unfortunately, our video paralleled with the pandemic. We had a huge trip to Taiwan booked and as concerns / uncertainties about travel began to escalate literally by the hour, we pulled the plug on the full-length. And global travel restrictions befell on everyone shortly after. Once the dust settled, CYFT became the focus. The squad didn’t need to travel, so it was an obtainable project even during the height of the pandemic. At times I’m sure the team felt like the video would never be done. But as the footage piled up and timelines were taking shape, I saw the potential for a full-length. I got the blessing from Ben Ward and powers that be at GT to keep it going. I’d occasionally stoke the squad by sharing the progress of their footage, and so it went…

Who has full parts?

CYFT highlights GT’s up-coming riders. Our established pro team, including Albert Mercado, Brian Kachinsky, Dan Conway, Leandro Moreira, Mad Mike Guth, and Tate Roskelley share a mix section—most everyone else has a full part, or pretty darn close. Also, despite being added to the pro team recently, Mason Ritter and Julian Molina filmed amazing parts and we wanted them in the video as well.

When did you start filming for the video, and where did the team travel to?

We officially started filming end of 2019, but there’s footage that was stacked prior to that and put toward this project. As for travel, Mason Ritter, Jeff Purdy, Tristen Cooper, and Julian Molina came to California to film with me, and Michael Dickson shot his entire part in Barcelona in two weeks with Chris Tilk and his lady.

GT produced Seriously Fun in 2017; how is CYFT similar/ different?

Personally, during the Seriously Fun era I was only a photographer for GT, so I didn’t play much of a role in the video production. But I can say that the team has grown exponentially since Seriously Fun. And when the crew gets together, the vibe and camaraderie is the same as the name implies with Seriously Fun.

It’s been over 20 years since you were the main person behind a full-length video production (Animal 1), right?

While I’ve lent a hand in a number of videos over the years, other than a crude VCR to VCR video I made in the late 90s called Stairs, I have never edited a full-length on my own until CYFT. While I filmed the majority of the first Animal video, Glenn PP Milligan edited it, with direction from myself and Bob Scerbo. And four years ago, Zach Krejmas and I put out Doorstep, which we co-filmed and edited—much like what Bob Scerbo and I did back in 1999 with Don’t Quit Your Day Job—which Glenn also helped us edit.

In summation, I cut my filming chops after watching skate videos in the late 90s, neglected filming for over a decade, and then I got a crash course in editing / video story telling during long drives with Krejmas in the mid 2010s. Throw in a few dozen videos on YouTube for RideBMX, OurBMX, and GT, and I finally put it all together with CYFT.

How has video editing changed for you?

If it weren’t for YouTube tutorials, I’d probably still be editing the video.

You have clips in both Animal 1 and Can You Film This?; what’s riding like for you 20 years later?

I never would’ve imagined I would make a video for GT, let alone have clips in one—but I guess that’s a perk of the job. But seriously, I didn’t plan to include myself in the video. But the way the parts were coming together with the amount of footage some of the dudes had, it just made sense to add my footage to complete the puzzle.

I love riding just as much as ever, but between work and prioritizing time for my family, riding has taken a back seat, unfortunately. But I ride as often as I can and I’m making the right lifestyle choices to ensure that when I do find more time to ride again, I’ll still be able to get off the ground.

How much of CYFT did you personally film?

I’d say it’s about 60/40, contributed / me. We have a long list of contributing filmers, but Stew Johnson, Ryan Chadwick, Ryan Fudger, Murphy Moschetta, Chris Tilk, Felipe Correa, Dan Conway, Justin Benthien, and Adam Lievesley all helped out significantly. Ben Ward was instrumental in the project—from sharing his opinions every step of the way, providing me with countless great ideas, and helping keep the many ducks in a row. Matt Zuppani literally jumped off a train to come to the assist with all of the video as well. And Andy Persing saved the day last minute with helping us authorize the DVD. Brendan Mulrooney and Beny Huckaby delivered with the premiere help and packing/shipping of the DVDs. Of course, plenty of other people helped as well—sorry I couldn’t list everyone.

Talk about catching Covid around Swampfest and editing the video.

I actually had a Covid scare during peak pandemic and isolated in a tent in our yard for a day/night and edited Dan Conway’s Sick Mutha Fucker video. By the time I got my negative test result back I completed the hard part of laying the groundwork and pacing out the footage with the song.

When I tested positive for Covid after returning from Swampfest, I quarantined in a hotel for eight nights. Fortunately, I was asymptomatic, so I just had a lot of time on my hands without any distractions. I already had a few sections edited for the most part, so it was only a matter of tightening up some parts, editing a few others, and then assembling it all together and sorting out the order of the sections. I shared a few renditions with Ben Ward, made adjustments, repeated that a few times, and by the time I checked out I’d say I was about 90 percent done with the video—the credits being the main thing I had to do still.

That clip of Ratty Maty landing on you looks absolutely brutal. What happened?

Yeah, that was a wild one—with over 20 years of putting myself in harm’s way, something like was bound to happen at some point. In the case with Maty, we discussed the trick and he planned to pop off the corner of the ledge and rotate away from me—and I would’ve been pulling back out (away from him) as he spun. Off course, things aren’t what they seem when rolling fakie and he ended up half-cabbing off a different part—closer to me. Since I was watching through the LCD screen and it was fisheye it all happened so fast and I didn’t realize what was about to happen before it was too late. As shitty as it was, I’m just grateful that he doesn’t run pegs or that his sprocket didn’t cut my ear off or something. Considering the circumstances, I got pretty lucky with just a few little cuts, a stiff neck, and a broken Metabones adapter—the camera and lens were totally fine. That crash happened early in the day and Maty went on to absolutely crush it—he filmed all the transition clips in his. part during that one session.

What’s next on the horizon for GT?

That might be a better question for Ben Ward—he’s the idea man and the big brain behind the operation. But in the immediate future, we’re working on another video with Albert Mercado, and we have a few other video projects in the works as well. It’s easy to keep up with all we have going on, just follow us at @gtbmxfreestyle and YouTube.com/gtbmxfreestyle.

Thanks to all the riders on GT for their time, effort, and patience during this project. I know I can be a scatterbrain at times, but I hope you all feel it was worth it when you watch the video—I know I do. I’d also like everyone at GT for giving me this opportunity, especially Ben Ward, Mike Marro, and Brendan Mulrooney. And thanks to all the riders who watched the video, follow us, and support GT in anyway. 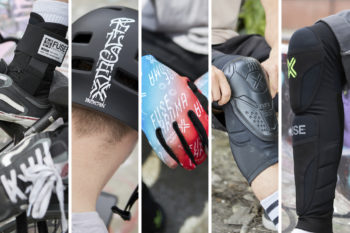 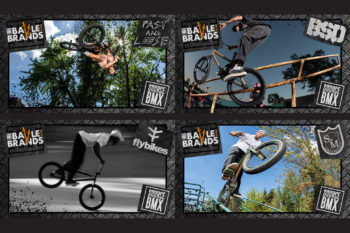 SOURCE 'BATTLE OF THE BRANDS' 3 - ALL THE VIDEOS

Vote for your favourite Riding Edit