"Surrounding yourself with the right people is super important."

After a couple acrobatic maneuvers involving the fence, Anthony locked in for this gap to oppo smith.

Anthony is 20, Goes to college full time half the year, and still finds time to ride and shred with all the homies while maintaining a high grade point average. For a young Bull, Dero really has his goals set up and knows what he wants to be doing. It's a rare thing to see here these days... someone who is talented, has a humble attitude about it all, and when it's time to go, is always ready to give it 100%.

"It does make it more fun trying to do new tricks on old spots." - More Info

Where are you from?

Garret Reynolds is from the same town I as I am, so it is a little challenging finding spots that haven’t been blown out; haha. With that being said, it does make it more fun trying to do new tricks on old spots. It’s motivating to me in a way. I’ve managed to pull off a few new ones for this edit!

It seems the type of spot you always want to ride is something not chill. What goes through your mind when charging up to some gap or grinding some savage ledge/rail?

That sounds about right, haha. I like to visualize what I’m about to do. Before I do a trick, I do a bunch of run ups and get a good feel for it. After that I clear my head and go.

Dero went to war with this kink Rail. At first he felt out a couple of 180s and, after a couple savage falls, he decided to go for the three.

You recently got invited by Nigel out to a GShock commercial filming, What was that Experience like?


Shooting for GShock was a super cool experience, I’ve never really done anything like it before. Plus it was my first time shooting with Nigel, so that was sick too! The shoot was located in Brooklyn and it was for RESPECT Magazine X Casio. I met up with Nigel early that day and we rolled up to the commercial location together. They had us do a bunch different of shots, modeling the watches on and off the bikes. After that we did a quick on camera interview, which was the most nerve-racking part for me. That side of BMX is definitely something I want to get into more as I progress.

This threader crook was one of the first photos we shot for this Low Profile. Unfortunately though there was no filmer present and we didn’t make it back to the spot before deadline.

Speaking of progression, You got your first sponsor deals this year with Pyradice and Brooklyn Machine Works. What’s it like riding for them.

The PYRADICE deal has been something that’s been in the works for awhile now and I’m hyped that it has actually come together. In just the few months that I have been riding for PYRADICE, Nigel’s been a great mentor helping out in anyway possible. He really has opened my eyes to where riding a bike can take you. As far as the Brooklyn Machine Works deal, UPS rolled up to my house one day and dropped off a new frame and a bunch of goods. Next thing I knew, they were saying “welcome to the team”. It’s sick to be apart of two brands that share similar visions as your own. Surrounding yourself with the right people is super important.

This was another photo that we shot at the beginning of the project with no filmer present but Dero and Carter made it back to get the clip. Gap off the loading dock over the fence.

"I am a big believer in not only being able to recognize a person's potential but in also having the insight to reach out and help that person work towards their goals. That's the exact feeling I got when I caught wind of Anthony De Rosa. I watched a video of his riding and heard about him through a friend of mine. I quickly learned that he was truly an individual with a unique style of riding and a solid work ethic. Those are the type of traits that when applied correctly can turn dreams to reality. I was eager to work with Anthony because he's a good rider and later learned that he's also a focused, down to earth dude." - Nigel Sylvester

'No Trespassing' signs everywhere and a shit ton of foot traffic made this slant wall to opposite 3 extra tense.

While getting lost looking for another spot, we turned around and noticed an odd looking building at the top of the hill. We decided to go check it out and ending up finding this sharp kinker.

" I like to visualize what I’m about to do. Before I do a trick, I do a bunch of run ups and get a good feel for it. After that I clear my head and go."

Abandoned grocery stores can make for some interesting spots when all the carts are gone and you've got some pop.

"Most people would probably want to ride every day that they can whilst filming for an edit, but not Anthony. This took us 4 months to shoot but with only a total of 9 days of actually going out. Sometimes though scheduling everyone together can be a beast. We all live pretty far from each other so meeting up and riding some good shit was always a process. Driving around all of NJ till late at night or day trips into NYC were always set back with heavy amounts of traffic, construction, flat tires, or a pissed off a security guard. It's safe to say patience is a virtue that Anthony holds." - Chris Marshall

Anthony hunted down a hometown spot that hadn't been annihilated by previous inhabitants and got this nice steep feeble.

"it does make it more fun trying to do new tricks on old spots." 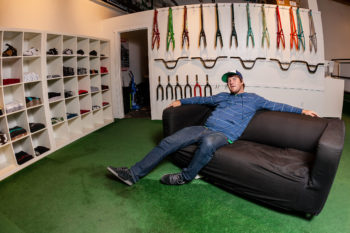 And no, we're not seriously trying to discourage anyone from opening up a shop... 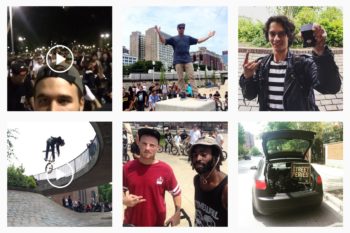