"I got kicked out High School for a whole year. Not that bad of a gig."

Words and Photos By David Leep

Austin Aughinbaugh… not playing favorites here since he’s from my home state and a fellow Hoosier bro, but it was refreshing to be around someone who wasn’t the least bit pretentious—and he definitely renewed my faith in BMX. Anyway, I had a great time hanging out with Austin, so in-between a way too short weekend/heavy days of dodging rain, security, police and corn cobs... I figured I'd make a wee list about 10 things my spidey sense picked up on that you may or may not know about Austin Aughinbaugh.

“I don’t know… it’s… style dude—they’re sick. I see people wearing white shoes and I think they stick out.“

“She got me to Chicago and back. It’s my step-Dad’s truck, so he’s been letting me use it to go to this job out here. He didn’t want me to take it to Chicago, but I’ve taken her there twice now.”

“Muncie is home. It’s where I first really got into riding. I moved out of Marion, David Grant was out here in Muncie, so there was somewhat of a scene. There has never been a tornado in Muncie, because apparently Chief Munsee put a spell or something on Muncie so no tornados would ever hit it."

“I got kicked out for a whole year. Not that bad of a gig.”

“Well dude, when you’re 18 and your parents are hardcore-Christians and they kind of push things on you… I was kind of going though a young life crisis and I said fuck it and joined the Army. As much as I hate cops, I was going to be a military police officer—just because I could have a K-9 unit, I wanted a dog, so I could kick it with him. I always asked my friend who joined and said, you still ride, right? You can still ride when you are in the Army? He was like, yeah, a little bit… not really. I was like, fuck. I went to the MEPS (Military Entrance Processing Station) and I had all these dudes yelling and me and I was like, I’m not even in the Army yet. Yeah, so I joined and then I was supposed to ship out in three weeks and I was like… fuck this and I dipped, went to New York and worked this door-to-door job. I didn’t get in trouble because you are not technically AWOL until you go to basic training."

06: Living With The Amish

"I got in trouble in my 5th grade year going into 6th grade. My Dad sent me, I stayed there for like a month or two—fully immersed in the lifestyle. I dressed like them, went to their German church. The little Amish boys wanted to beat me up because I was a fraud and they knew it. I drove Clydesdale horses, buggies… it honestly wasn’t that bad—it was tight. I was kind of bummed to leave, they were always doing something."

"This has been recent… maybe two and a half or three weeks. My stomach is like soooo much better. It’s better. Meat is such a horrible product. The more and more I get into it, I don’t know if I’m ever going to eat meat again. Its such a bad thing for my stomach. Anytime I would go and eat a burger, I’d have the worst gas and stomach cramps—I just didn’t want it anymore"

Getting gully from Indiana to California - More Info

“They’re sick. Daniel (Bunker) is the reason I got tattoos. He started getting a bunch and then started tattooing. I don’t know… I’ve always liked to defy authority. My Dad always told me to not get tattoos, so I was like I want tattoos now. I feel like anything that gets drilled into you mind hard enough—you want to do the opposite."

“We really don’t have a name for it, it’s pretty much Creepy’s (Daniel’s dog) domain. Creepy Crawler the dog. It’s pretty much been two tattoos a week, partying, we’ve been having a lot of friends come through. My friend Drew from Portland… friends I haven’t seen in ages have been coming through to kick it before I dip out. A lot of crazy stuff goes down, like skateboarding inside the house."

“Growing up with Bunk and T-Lo I met them skating first and I gradually got into bikes. I think my cousin got one and then I got one. I started going to the skatepark and everyone would hate me—seriously. Id din’t have many friends when I was super young and I would kind of force them to hang out with me and they showed me the ways. We started going out on missions and I remember trying to fit my bike in Bunk’s Blazer… the first time I did it he was so pissed. I just remember watching his face. But, we grew up to love each other and anytime we’d go to spots I feel like I’d have to huck myself.”

" I was like… fuck this and I dipped, went to New York and worked this door-to-door job. I didn’t get in trouble because you are not technically AWOL until you go to basic training." 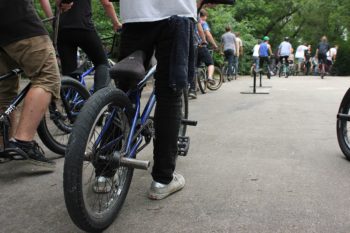 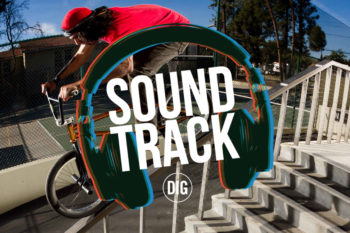