Since the re-birth of BMX in the early nineties frames have changed a LOT. With the birth of multiple rider-run companies, more often than not with little or no manufacturing experience, and with the rapidly evolving nature of bike riding, some products were out of fashion before they even made it to the bike shop. The lack of widespread internet use and the prominence of slowly produced print media all added to the mix. In short, the nineties were kinda all over the place, as were a lot of the bikes we rode at the time.

WETHEPEOPLE is one such company that has faced those many movements and trends as they pushed their own design ideas intensively over the past two decades  As part of their 20 Year Anniversary we take a look at that journey and the evolution as we take the newest addition to their frame line - the Battleship, and compare it against the very first frame they ever-made back in 1998 - the KH-01. Just wait till you see those drop outs though.

THEN: Designed in 1998 (18 years ago!) and first released in 1999, the KH-01 was our first ever aftermarket frame. The KH-01 was the signature frame for Karl-Heinz Arnoldy, one of the original WETHEPEOPLE team riders and one of the best riders in the country at the time. Back in the 90’s BMX bikes entered the “overbuilt” era. Most frames and parts at the time were very poorly designed and manufactured. All the good quality BMX products were made in the USA, and were incredibly hard to find, especially in Europe. With riding progressing at such a fast pace, bikes just couldn’t keep up, so riders were going through bikes and bike parts on a weekly basis. The idea behind the KH-01 was for the frame to last as long as possible, and hold up to almost anything.

NOW: Fast-forward 18 years and around 140 frame models later and we have the all-new BATTLESHIP frame. Back in the 90’s a frame was designed to ride pretty much everything. It wouldn’t be uncommon to see someone ride skate park, trails and flatland all on the same bike. However as BMX has grown, the different genres have all discovered their own ingredients on the “perfect” BMX frame. The BATTLESHIP was designed with the technical street riders on the team, and the snappier, more responsive geometry and brakeless design reflects this.

NOW: It’s 2016, and thankfully, BMX bikes don’t have to be built like anchors to last any more. Frames have shed a lot of the weight and material that was simply not needed (such as the dinner plate dropouts) and not only are the bikes way lighter - they are actually stronger than their 90’s ancestors thanks to better materials and building methods. The BATTLESHIP is prime example of this, with its unique tubing. The top tube and down tube are hydrofomed at the head tube junction, which makes the frame incredibly stiff and strong, but adds no more weight over a traditional welded on gusset frame.

NOW: With a steeper 75.5 degree head tube and a super short 12.7” chain stay, the BATTLESHIP is the most responsive frame we’ve ever made. As street riding has become so incredibly technical, riders have demanded a frame that lets you squeeze that extra hard 180 or 6ft out of your fakie manual. Measuring up 2.5” shorter in the backend than it’s 90’s predecessor, and almost 2lbs lighter, at a risk of sounding like a disgruntled member of the mid-school community - “riders these days don’t know how good they’ve got it…”

NOW: These days dropouts are much smaller in size and are designed to fit the shape of a peg and hub guard for perfect “snag-free” area and a better surface to grind on. The shrinking of the dropout actually began with the legendary Josh Heino OMEN frame which came a few years after the KH-01 and is a story of frame innovation itself. The BATTLESHIP uses a 6mm thick laser cut dropout which is designed to give larger diameter plastic pegs and hub guards plenty of room and the perfect fit, even when slammed right to the front of the dropouts for the shortest wheel position.

NOW: It took us a while to find the perfect size, but after a secret industry meeting in New York, the majority of BMX brands decided on this new “standard” and eventually all of our frames moved to the MID BB around 2006 and we haven’t looked back since. The Mid BB was sitting under our noses the whole time, by taking the same bearing from the USA BB and throwing away the cups and pressing it directly into a CNC machined shell, this has cut out at least 1hr of the bike building process and has eased the frustration of bike mechanics around the world.

NOW: As bars have got taller, the stress and leverage that goes through the front of the frame has increased rapidly. Head tubes have slowly grown taller, and the BATTLESHIP frame uses our new 127mm head tube - a taller head tube is stronger, stiffer and provides a stronger connection to the top tube and down tube. Since most riders ride an uncut fork these days, the taller head tube allows you to do this without needing an excess of spacers under your stem. 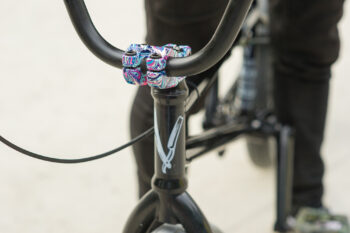 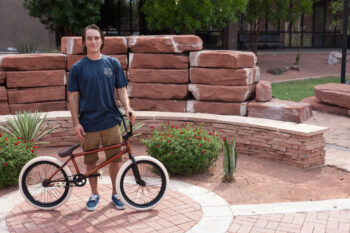