"I'm Not Going To Jail For A Feeble To Smith"

Behind The Scenes With VANS Unfiltered in UAE

It's so easy to follow the well-trodden path of BMX - Barcelona, Austin or LA, it's all been done countless times before. That doesn't mean it isn't fun though, it's just not as interesting as flying to the middle-east and attempting to ride bikes on pristine marble and gold encased buildings. For the third instalment of the VANS Unfiltered series Frenchmen Matthias Dandois and Alex Valentino donned the Keffiyeh and got busy avoiding security and the risk of jail in the United Arab Emirates. Here's some details...

What were your initial impressions of the UAE upon first arriving?

The first day was kind of a nightmare riding wise. We didn’t really plan anything and just cruised around like we would do in any cities. We shortly found out that the country is not bike friendly at all and it was pretty sketchy to ride around. We tried to ride a couple spots but security came up after two minutes. We thought we wouldn’t be able to film anything the rest of the trip. Culture wise, it was kind of a shock especially Abu Dhabi. You’re not allowed to make out with a girl at the bar, which was my main concern haha.

How did those impressions change as the trip came to an end?

I did end up making out with a chick at the bar. Happy ending! No, seriously you just have to adapt and embrace the culture of the country you’re in. The food was amazing, the people are cool for the most part and we ended up riding some dope spots. I think the fact that it was such a sick crew (Alex, Bakos and Rich) made the trip super fun and a good memory.

How was it with security? Was it difficult to ride spots?

There is literally more security than regular people in this country! And so many fucking rules! They made it so hard for us to ride. At one point, Bakos was just taking photos of some building and security asked him to delete the picture and leave. Just to make a point. Also we were pretty scared they’d call the cops on us cause we heard you can end up in jail pretty easily. That would have sucked. That’s why there isn’t any peg clips in the video. We found some sick ass ledges but fuck going to jail for a feeble to smith... To sum it up, don’t go to the UAE if you're going to take 500 tries for a clip.

As for flat it looks like you had some perfect places to ride with epic backdrops. What was the reaction of the locals?

It’s true that some of the flat spots were amazing! I love to ride in exotic places! It’s always fun to show the locals what you do, for most of them it’s the first time watching Flatland, and they were really into it. I love it cause it’s such a simple and fast way to connect with the locals. You instantly become friends and can have a cool interaction.

Would you say the UAE is a realistic destinations for riders?

Honestly, no. Unless you have authorisation for every street spot you shoot at. Like they did in the “We Are Blood” video. Then it’s realistic. They have some really cool looking spots though.

"We found some sick ass ledges but fuck going to jail for a feeble to smith..." - Matthias Dandois

How was it filming with Rich Forne? How does the process differ compared to other filmers?

It was my first time spending time with Rich and actually filming with him. He’s one of my favorite filmers and most importantly one of my favorite riders. I think the fact he’s so good at riding BMX makes him a genius filmer. He’s not scared to get really close to you while filming. In my opinion he’s the best fisheye filmer in the world. I don’t think there was any difference compared to working with any other filmer. I was just stoked on the opportunity to film with him cause he makes everything look so good!

Three things you loved about the UAE?

-Traffic is a nightmare

If you could give one piece of advice for someone visiting UAE, what would it be.

Don’t make out with a girl at the bar.

What were your initial impressions of the UAE upon first arriving?

We landed in Dubai and I remember thinking that it looks like they trying to do everything but bigger, and to be honest I had bad preconceptions about UAE. I like the outfits and the gold though. I’m confused.

How did those impressions change as the trip came to an end?

I really enjoyed the trip, we had a really good time together going on spot missions in UAE. I will remember this trip as a really good experience, however I would not recommend the country.

How was it with security? Was it difficult to ride spots?

It was really difficult in Dubai because we didn’t realize that we needed authorisation if we wanted to ride a spot, so it was a bit scary sometimes as we didn’t know what could happen to us if we got arrested. Things went way easier for me when I started to wear the Keffiyeh to ride and Abu Dhabi was more relaxed.

"I had bad preconceptions about UAE. I like the outfits and the gold though. I’m confused." - Alex Valentino

Would you say the UAE is a realistic destinations for riders?

I don’t think so, I’m really glad that we were able to comeback with footage and photos without any trouble, but I really enjoyed riding my bike over there - it was difficult and the risk to ride was high.

How was it filming with Rich? How does the process differ compared to other filmers?

I loved it and I looking forward to doing something else with him. On the spot he is organised and quick and the end result is always splendid.

Three things you loved about the UAE?

I loved the the Sunset on the Cheikh Zayed mosque in Abu Dhabi, the gold market in the old town of Dubai and the outfits.

I didn’t liked how fake a lot of things are in UAE. 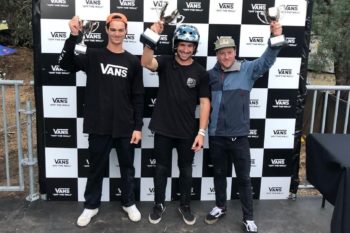 The results are in... 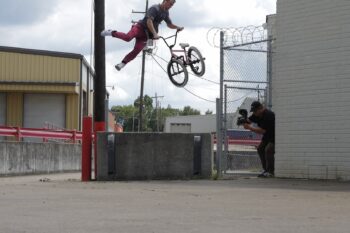 Creating Subculture - An Interview With Veesh

The Story Behind CULT's New AM Series