Look for the most flimsy rail you can find and grind it off of a roof. Jay is not scared... even though this bouncy house tossed him ugly a handful of times.

Intro and Interview by Sean Burns Photos by Leonid Furmansky

A freestyle cigar. Are you supposed to light those up or are they just there to hang out your mouth unlit to look cool? Either way, Jay Wilson set's them on fire. Once a young twinky boy out of Mandurah, West Australia… but now a Deadman Cigar Dad. Jay's riding has matured so much in the few years since I met him that he is practically a different person. He used to be pretty sketchy, and that was awesome but when the hell did he get so dialed? From a style that is a combination of early 90's Dirt Brothers mixed with a Nowhere Fast video, plus insanely new modern tricks like x-up crooked grinds… Jay Wilson has a style like no other. Percision, confidence, and craziness. He might be the only rider on the Bone Deth Deadman team that can do all the same tricks as Dennis McCoy over a box jump and the same grinds as UK rider Cookie; what an insane combo.

It's like a long haired 90's rider melted into a modern grind dad. What do you even call that? Let's just say he is freestyle cigar for the time being, although always a deadman. The point being, he is retarded on a bike. Jay flew to Austin, TX on september 11th 2014. He had a three month stay here and managed to shoot some photos with Leonid Furmansky. Some things are left undisclosed to save for the new Bone Deth dvd "The Dirty Sniff" but meantime here is a taste of what Jay Wilson's riding has matured into. No longer a little twinky boy…

The face of Freestyle Cigar doubles as ‘Cousin It’ at the bar.

1.What is your name, age, and location?

2. Big Kitty or Salty Eric? Just how many nicknames have you acquired in the states or back in Australia?

Salty Eric is no fun, there are 10000 more nicknames here in Australia for me. I can't keep track.

3. In which year did you start riding?

4. How did you become affiliated with Bone Deth?

5. You have a lot of Jimmy Le Van Aggro man 90's dirt tricks in your trick roster. What are some of your influences behind that?

Spending a lot of time watching old freestyle videos like 'Aggroman', or "Ride On" and 'Cheese' (Dirt Bros). Fiending to be able to do those tricks and keeping the ten year old me happy.

6. You also have a very freestyle early 2000's 'North West Blueprint 'style. Did any of the NW have an effect on you?

I guess so. I didn't really know what the North West was until you Americans would talk about it. But yeah Blueprint is one of my favorite videos. So much epic brain changing stuff in there.

A weirdo Russian family let Jay use their kitchen as run up for this curb step gap to rail. Imagine eating lunch and your dad allows this weirdo to bomb a rail outside your door?

America templates I reckon. As long as their t-shirts don't cover their shorts. That is the worst. Hiding bodies.

8. Do you think there is a difference being an Australia pro rider and an American pro rider?

Yes, but it doesn't matter because pro is the gayest three letter word since gay. (Editors note: Is that bad gay or good gay?)

Party management went one a week long trip without ever buckling up his pants or belt. You know all the good Alex moments are too hectic for BMX websites.

10. Besides riding BMX you work at a milk factory right?

I studied for four years to get my masters in milk operations, now I can sort milk by flavor and size in huge refrigerator. legally.

He really is. Blue mountains legend from New South Wales but get's fucked on with bad luck and general Australian isolation. He still manages to kill it what ever the circumstances. Funniest, sickest cunt ever that you wish to spend a day with telling stories and getting fucked up with if you are lucky.

12. What is an average week like riding in WA?

Pretty sick. Someone somewhere will be out riding pretty much everyday. Every Wednesday is mang bang at manning skate park usually around twenty or so people there every week. The weekend is lazy days riding schools or whatever.

Opposites attract. That's Jay's wrong way to peg from a roof to rail. A Byron Anderson Nowhere Fast inspired Jay Wilson is so 1998.

Jay can fire these out with ease. This might even be the smallest one he has done.

"He might be the only rider on the bonedeth deadman team that can do all the same tricks as Dennis McCoy over a box jump and the same grinds as UK rider Cookie." - Sean Burns

Jay's favorite videos are the likes of Eddie Roman's Ride On, and AggroMan. It surely shows in this 360 can can x-up.

13. What is the worst and best thing in the current state of BMX?

I don't know there are so many 'gay' things in BMX now probably. Lifestyle clips haha. The best thing would be that there is still unknown sick cunt's out there doing crazy shit.

14. What is freestyle cigar?

Some inside joke thing I think Jamie Mauri came up with about about filming old man clips. Impossible to explain right now.

16. What's up with the Mcdonalds diet?

It's cheap and delicious. I am lazy and addicted.

17. How long have you been living off that shit?

Since around thirteen years old. Not really too much anymore unless I am in the States.

"I studied for four years to get my masters in milk operations, now I can sort milk by flavor and size in huge refrigerator. Legally." - Jay Wilson 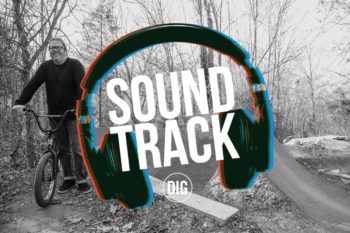 The first selection of Steve Crandall's Favourite Tunes from over 20 years of FBM videos.. 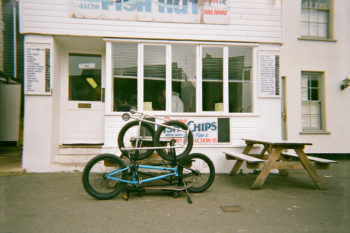 4Down 1Up Final Results