An interview with Shadow and Subrosa's latest addition

Interview and photos by Wes McGrath Video by Alex Gonzales

Well, If I have to think back to my first interaction with young Johnny Atencio, I'd have to say he was some what of a "Shoo fly, don't bother me" type of kid! But the difference between human beings and your average house fly is the fact that Johnny's life expectancy is much greater than that of a winged nuisance... So through his genuine little kid ways of becoming more confident with his riding, he also in turn, grew into a much older, much more mature personality which soon enough couldn't be denied by myself, his fellow bike riders and eventually the eyes of the Shadow and Subrosa family! In just 8 months or so Johnny has managed to put together this amazing video between his high school schedule and his first job, all filmed in his hometown of Albuquerque, New Mexico with the exception of a short trip to Denver, this video is sure not to disappoint! The best part about this kid is at the young age of 16 he has his sights set at a high level of progression and more than anything else, he's enjoying every moment.

After school and before work with the next generation... - More Info

Witnessing Johnny handle this rail was a bit unnerving, given I've seen a couple people try it, which have much more rail experience and control, yet he still managed to get this done in a few attmepts... Mind you, he was the first one to actually make it down this rail, before it was slayed by his now fellow teammate Mark Burnett. Johnny clocked this clip in his work shirt, just in time for his shift at the supermarket!

So Johnny let's get this started... Where are you from and how old are you?

I am from Albuquerque, New Mexico, born and raised and thankfully I am still only 16 years old!

Since you belong to the young guns era, what does riding mean to you at this ripe age of 16?


Well being this young in an industry that is constantly gaining momentum and the riders are always getting better, I have to try and ride every day even if it's just five minutes, and just enjoy learning new tricks, meet new people and see new places.

If you are already riding at this level, where did it all start for you? How old were you when you received your first bike that made you want to learn how to ride BMX?


I started off with cheap Walmart bikes that my mom would buy me back in 1st grade or so, and ever since then I just rode each bike as much as I could until about 7th grade when I got my first 'real' bmx bike which was a Mirraco complete.

Shot back in March of 2014, I'm pretty sure this session might have set Johnny up for some type of trouble... His mom was calling multiple times telling him to come home, after about a dozen missed calls Johnny gets this rail and jets straight home!

This photo placed above was shot when the Subrosa team was in Albuquerque, New Mexico back in March of 2014. Since this session a lot has happened for you, you began filming your debut video and along the way you got a whole lot better! What was so special about this night session with Subrosa that has had major impact on where you are today?

This night was so awesome! Getting a chance to ride this rail with the Subrosa crew was a bit of a surprise, I did my first crank arm on a street rail with the whole team cheering me on, so after this night I started pushing myself way more then before. Also I became friends with most of the team and they kept me motivated to keep riding and pushing myself. I started filming my debut video with Alex and I guess from watching the Subrosa guys film their video in my hometown made me want to go out and film a video, and the results came out perfect with the help of Alex Gonzales and got me to this position where I am now, riding for Shadow and Subrosa, which I couldn't be more thankful!

Since that first session with Subrosa a lot has happened for you, your riding has improved tremendously and you began to film your video with Alex non-stop! What was your motivation to get so crazy so fast?!

Yeah man I ride as much as I can and unfortunately I can't always meet up with Alex, but when I do and we film together, I push myself more to make something strong and worth while. Just having the opportunity to have a filmer who is as motivated as I am to get quality stuff done is definitely a blessing! I always want do stuff we're both stoked on and thanks to Alex our results turn out awesome!

Who are some of your riders that motivate you to push yourself to be a better bike rider?

My favorite riders right now are Joris Coloumb, Dustin Arp and Scott Ditchburn! They have all pushed me in different ways that make me aware of my riding and where I want to go with it...

What was the first riding video you purchased? In what form, DVD, VHS, ITunes?


The first video I bought was 'The Price is Wrong' DVD by Animal. I remember watching it everyday before I went out riding.

Being one of the youngest in a group of riders from your hometown, what does it mean to you to, 'keep up' with your predecessors?


Being one of the youngest riders in my hometown definitely pushes me to keep up with my friends that are much older than me, from my buddy Adam Accardi who is 19 to Gil Montoya who is in the level three club, I'm always being pushed. There's not too many people older than me here that ride as much as I do, so usually when we're out riding they talk shit to me since I'm the youngest one and that really pushes me to be on top of stuff on my end. Without having these older riders around I don't think I would be as motivated to ride, because they motivate me to learn new tricks, then when I do ride with them I like to show them what I have learned since last time we hung out!

This set-up was quite perfect for this nollie double peg, but just so it wasn't too perfect Johnny had to thread two parking blocks at the bottom!

In the slew of shit-talking back and forth I saw Johnny rush at this rail to take his mind of the never ending salt storm! This rail has about 39 skate stops screwed into it now...

​This rail is absolutely massive to say the least! But that didn't seem to bother Johnny enough for him to walk away from this epic rail without attempting what he went there to do. This set-up is a 9 flat, 11, flat, 12 stair set and that's a total of 32 stairs! I feel strange showing this image without him pulling it, but let the limitations be set so you can surpass them!

This crash took you out for a couple months or so with a minor knee injury, in that time you decided to wrap up the video since the spot was remodelled before you could assess returning to the monster... If the rail wasn't rendered unridable now, at least for a crank arm grind, would you go back and try the rail again?

After this knee injury on this rail I'm a little more cautious now with crank arms but I'm starting to feel comfortable with them again. So I don't know if I would go back and try something else down it, this one just might have got the best of me...

What would possess you to try and handle such a gnarly rail without even getting two pegs down it that day?


The day I tried this rail it was pretty close to dark and it was freezing, I had already just double pegged the rail a couple months prior before going back but I wanted to go back and get something else on it. So the day we went back I told myself just grind the whole thing first for a double peg, then go back up and attempt the crank arm! I couldn't get down the rail after falling into the stairs and getting thorns stuck in my hand, it was getting to dark so I just went for it and after 3 tries it took me out for 2 months and was really bummed.

Does a crash like that put you in check and give you perspective on what it means to be being injured and how important it is to stay healthy and pedalling?


Yes definitely a crash like that puts me in check on what I'm trying to do. Going to that rail I was pretty confident I could do it and things just didn't go as planned, unfortunately. Injuries happen occasionally but I wasn't too upset because the good times definitely out weigh the bad in BMX!

This rail is absolutely nutty! On a short weekend trip to Denver, Johnny was enticed to step to this rail, and to everyone's surprise he manned up and handled this second try! 19 stairs at 16, I'd say he's on the right path!

Being the age that you are, your style of bombing big rails surprises a lot of people! Was there anything specific that made you step up to that level so quickly?

Yea I don't know man I watch a lot of videos before I go out and ride, most people don't ride that fast I guess and mostly like to do a lot of combinations with grinds and stuff at my age so I wanted to try and distinguish myself from the rest of them, I also wanted to take advantage of how many rails we have in Albuquerque.


Now that you have such a great opportunity with a very supportive group such as The Shadow Conspiracy and Subrosa Brand, Who is it that you have to thank in your life for this whole thing to come to fruition?

This opportunity is a dream come true and I definitely wouldn't have this opportunity with the help of some great people! First off thanks Wes for always being down to ride and shoot photos when you can this wouldn't have happened without the help of you! Also thanks to all my homies in Albuquerque and Denver, especially Alex Gonzales for filming this whole video and having the patients throughout the entire thing. Thank you Mario Carrasco for always being down to meet up where we are, Dustin Arp for always motivating me to push myself when I'm up in Denver riding or when you come down here to Albuquerque and thanks Derek Dorame up in Santa Fe for always working keeping my bike rolling. And thanks to my parents these past of couple years they haven't always been the most supportive but now they are starting to realize how much I love riding my bike and couldn't be more stoked for the years to come! 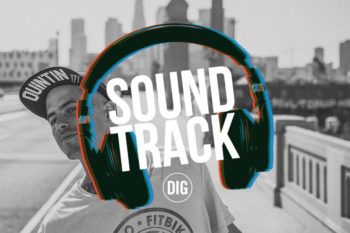 From Scroobius Pip to Notorius BIG 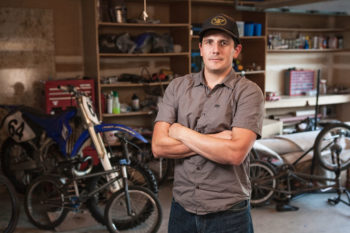 Re Print: Joey Garcia - Remember Me?

​ “I appreciate the fact that when I ride now, it's completely on my own terms.”