Joris Coulomb has always forged his own path in BMX and in life, never stagnating nor lacking creativity. Over the years Joris has developed many signature parts with his supporters, Subrosa Brand and The Shadow Conspiracy and he has had major influence in originality and individualism towards the greater BMX community.

These character traits within Joris really come out and are accentuated in his bike design, color choices and reflections of his worldly beliefs. Bright colors and Sanskrit are small examples which represent the embrace Joris has found in the Hare Krishna's. Combining his entire self into one BMX entity really shines through in the form of his signature bike, the Subrosa 'OM' frame, fork and bar; along with the Maya grips, sprocket and the Penumbra seat from Shadow, this bike is certainly an example of originality... And not to mention how damn good it looks!

Below, we dive a little deeper into the reasons behind how this bike came to life...

Check out an extended interview with Joris HERE too.

How's the bike feeling lately? Anything new on your bike that changes the way it feels? What's your favorite part right now?

I am super stoked on this new version of the frame and the new features, same geometry as before! I always feel like the grips are my favorite part ever but lately I’ve really been loving the feel and looks of those sample bars! From the drawings I had no idea what to expect them to be in person but it came out so perfect… they feel so unique even though I had inspirations from different existing styles!

So what's up with this new bar design you have going on here? What inspired this new approach in geometry for your signature 'OM' bars?

Well it’s been in the works for a little while now.. it took quite some time to figure out the design.. I had very specific in mind and it’s was quite similar but also different than most bars… I was definitely inspired by the classic Scerbo bars with the one crossbar, I love how smooth it feels! As far as geometry goes they are perfectly in between Simone’s bars and Matt’s.. I’ve been going back and forth between the two for a while and figure I needed a little bit of both. I’m still test the very first sample I got several months ago and they feel really good and strong! Really stoked on them I think they should be ready for the market very soon now.

Can you explain the meaning and reasoning behind the Sanskrit writings on your frame?

The Sanskrit text on the frame and now bars is my favorite mantra that I chant all the time, it’s like a tool for meditation and it actually feels nice to have it on the bike as a reminder when I get caught up on the pure riding aspect.

Fun Fact: Orange is a color of stimulation and enthusiasm; mixing the passions of red and the joys of yellow... Also increasing oxygen to the brain enhancing critical thinking and memory.

Why did you choose the color, 'Burst Orange'? What is the significance of the color orange in your life?

So yeah you’re right about the color orange and that’s why I wanted it. Ever since I’ve had my signature frame I’ve been doing every color of the rainbow or more specifically the 7 chakras. I started from the top with purple or crown chakra and getting down to red or the root chakra. So at the moment this orange represents the sacral chakra. It is in this chakra that we design the life we want. The qualities of this color are joy, faith, self-confidence, sexuality, balanced energy and honesty… I’m starting to feel like it has been doing something to me since I’ve been riding this frame….

Oh I just had to make so research for this one… it’s been so long now but if im not mistaken I’ll be 10 years next year!! It’s pretty incredible to be honest time flew by so fast and so much has happened. It’s almost impossible to keep it all in mind at all times… as far as my first signature part I first had a color-way of Simone’s frame and I think next was my own signature Om frame? Or maybe the maya grips or sprocket? Not exactly sure but these 3 came out first pretty soon after I turned pro. My signature frame has been out for 5 years ! Fun fact is that the geometry was so perfect ever since the very first sample that we never changed anything. For the first time this year we did changes a couple things like the integrated seat clamp and the investment cast but we made sure not to change the general geometry.

Joris behind his house in Long Beach, soaking up the early morning sunshine, really making the orange on his frame really pop!

60 seconds on LA before his move to Austin - More Info 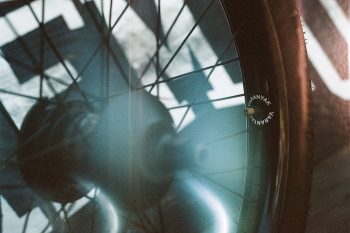 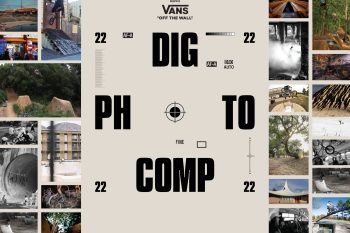 OVER $750 OF PRIZE PACKAGES UP FOR GRABS