Words and photos by Wes McGrath

Simone Barraco, Trey Jones, Seth Kimbrough and Joris Coloumb make up a solid yet diverse selection within the Shadow team and their riding styles are as different as their home towns are apart. Hailing from France and Italy in Europe, to the states of Arizona and Florida in the USA these guys represent some of the newest and most experienced riders who made up part of that heavy mix of team riders in the new 'What Could Go Wrong?'' DVD. As we all know though, wether you’re In front of the camera or behind the scenes, there is a lot more to filming a full video section coming than just perfect sunny days and getting away with every clip injury free. We’ll let the Pros take it from here…

"Don't get me wrong! I've always had a good time on trips filming, but the shadow team is so close, It's rare to be able to get that many dudes together, especially who all get a long like we do!" - Seth

Being such a seasoned rider as you are, how does this video project stand out from all the other videos you've filmed for in your career?


I guess I would say despite the bad luck with injuries toward the beginning of filming, what stands out the most about this project would be the trips. Don't get me wrong! I've always had a good time on trips filming, but the shadow team is so close, It's rare to be able to get that many dudes together, especially who all get a long like we do. We've always had the best times on trips. As far as my section goes, Chadwick killed it! I wish I could have filmed more but that's the way it goes! Over all I'm really stoked on the way everything came out, and all the dudes killed it!

When did Chadwick first become apart of TSC, were you already a member of the team?

I had been on TSC for a couple years before Chadwick came along. John Paul was doing stuff for a while, but most of the time it was just the team guys a lot on trips. We just filmed each other, and kind of just did whatever. Johnny Devlin did a lot of stuff at that time also. It's so sick to see how far TSC has come from that point. Chadwick is awesome! He works super hard to make sure everyone is happy, he puts up with a lot from us haha! I can't wait to see what the next year has in store for Shadow. I know that whatever it is, it will be awesome! So stoked to be part of this family. Ron and everyone at Shadow rules!

For you personally, were there any major changes in your life during the filming of this video that were almost detrimental to you finishing your video part in the way you saw best?

YES! At the beginning, I went through some personal/family issues that put my mind in a pretty bad place for a bit. A lot of stress was on me which brought on a severe case of vertigo. I never really knew what that was until I woke up one morning and could hardly pick myself up off the floor, I was in and out of the hospital for the following year. After over a year I began to be able to ride, and function like normal. I then went through a few other injuries after I started back riding again, due to being off the bike so long, and still dealing with mild dizziness. This year I am finally 100% and trying to make up for lost time.

Trey Jones - Trey roasts a tiny and steep tranny out in Arizona as the sun finally gives us a break and sets behind the huge ditch walls.

"Taj walked up to Ronnie while we were talking and introduced me to Taj, I was stoked!" - Trey

When did you become apart of Shadow?

Being from Florida, real close to Sparky's warehouse, do you feel you had an advantage toward filming this specific video part vs other parts you have filmed for your other sponsors?

Yes definitely, anytime Chadwick would come to Florida for business stuff at Sparky's we would go out and get a few things that I had found while I was home. Orlando isn't exactly a trip destination for a lot of brands because there isn't an abundance of spots to ride. There's stuff to ride but not a lot of them worthy of filming a video, like schools in California. A lot of one and done things or certain roof set ups.

You have a bike set up and style that differs from the rest of the team, did you find it hard at times to get good footage on team trips during this process when out riding?


Absolutely. There's lots of time when we show up at a school and its rail, rail, ledge, rail and that's not appealing to me. I like to ride stuff that's weird and unique. I can go almost anywhere and find a ledge or rail but you can't find a curved wall or transition on street. I like riding stuff that's fun for me to personally ride or something that I would like to see other people ride if that makes sense? Haha...

In the last few years you have had the chance to film various different DVD projects, CULT 'Talk Is Cheap', Danscomp 'Roll Call' and countless web videos for all your companies along side this specific project... What aspect of this video part differs from all the rest?


I had the chance to do a lot more stuff at home because of Chadwick coming to Florida. I did a lot of set ups I had been looking at for a long time. Also, I didn't just film everything I came across, I was more selective on spots and how I rode them. I do feel as though I matured as a person and became a little more confident in my own riding and did more stuff that I wanted to do... We filmed for 'WCGW?' way longer than my 2 other parts! Haha...

"...I really like the fact that we can have a bunch of the old clips we saved from the first trips we went on filming for 'WCGW?' that can be used in the DVD rather than random web edits!" - Simone

Do you find it more difficult to film the video section you want, always traveling to the states, instead of riding things in your country and local areas?


Of course... It's not as easy as living near someone who can film and just go out on missions to setups you have found before, to do tricks that you know you want to have in your part. Everything was filmed during trips to cities new to us, with the rest of the crew trying to get their clips and riding new spots everyday, which is amazing but not as easy to get the clips you want. I only have one clip that I filmed back home with my friend Stefan, because I wanted to have it in my part no matter what.

Riding for Subrosa and Shadow, doing Nike projects all the while, how difficult was it for you to maintain the video part you wanted to see in 'What Could Go Wrong' which ended up being the ending section in the video?

I like my part a lot and Chadwick did great, especially with the full video, but I would not be honest if I tell you that's a part I am 100% happy with... I didn't have that much free time to focus on the video as I would have wished, except when I was on these Shadow specific trips. I would travel more in between but not being able to have Chadwick in Europe wasn't as easy. I think everybody has a list of things they want to have in their part, usually they find set ups they want to get stuff done on around their city. That wasn't really possible for me in this video so I just tried to film as hard on these trips as I would on every other trip, I would go hoping to find setups that I was looking for to try and get done certain tricks I had in mind. I really like the fact that we can have a bunch of the old clips we saved from the first trips we went on filming for 'WCGW?' that can be used in the DVD rather than random web edits! Altogether I am very very happy with the way the video turned out, we had so many good times during every trip ,everyone killed it so hard and the mix of styles just make the video amazing and make me proud to be part of it!

Joris Coloumb - This slow motion tire ride took more than just Joris by surprise... To everyone's astonishment, Joris rode this rail twice as far as he initially anticipated! Check out the video to see how this clip ended!

"...realizing that it was worse living in the fear of "what could go wrong?" rather than the actual pain you might experience when you fail at attempting a trick!" - Joris

When did you first start riding for TSC, and when were you bumped up to the pro team?


I started riding for Shadow on the flow team back about three years ago, but I was added to the pro team almost two years ago now, and became more aware of the DVD project...

Did you ever think that you would have a full section in WCGW after being added to the team in the middle of this filming process?

No, not at all! First I met most of the team in Chicago, then I started riding for Shadow as a flow rider and didn't even know about such a DVD plan... Then it was introduced to me along the many trips we took! It all ended up as footage towards 'What Could Go Wrong?'!

How did you come up with the saying, 'What Could Go Wrong?'


For a long time, we were all looking for the right name for the video and I would carefully listen to what Ronnie and Chadwick had in mind... Adding my own perspective to it, it all came together in an episode of Adventure Time, where Finn (main character), has to face what we all have to face when we try to film a trick... Fear! His answer was "oh well, what could go wrong?", realizing that it was worse living in the fear of "what could go wrong?" rather than the actual pain you might experience when you fail at attempting a trick!

'What Could Go Wrong?' is available in select countries via iTunes and on DVD worldwide throughany Shadow supported shop, mail order, and their online store. 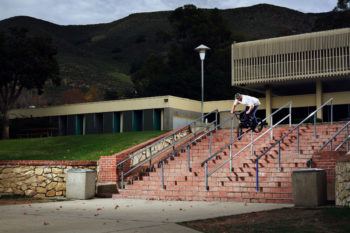 From one end of North America to the other 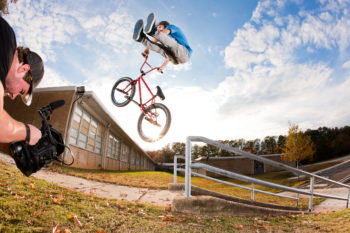