"... if you can raise enough money, I’ll get his face tattooed on my foot."

While DIG's David Leep was out in Indiana visiting Austin Aughinbaugh during the filming of his recent DIG X Gully Factory video he took some time to chat with Austin about some of the more eccentric ink on his skin. The best tattoo's have a story behind them and whether it's his old dickhead high school teacher or a frog, there's a reason for them all.

Mr. Meadows was a teacher at Oak Hill High School and he was the biggest dick head ever. For some reason he just didn’t like me - all the teachers got along with me except for this dude. He gave me a D- on my final, and I know I did better than that. So, I told everyone in class that I wanted to do a senior prank about Mr. Meadows and if you can raise enough money, I’ll get his face tattooed on my foot. At the time we were doing a fundraiser for hurricane Katrina and we raised more money for my tattoo in two class periods than we did the whole week for the hurricane fund. So I got the tattoo and we put it in the senior video where people are talking and stuff and it cuts to my foot and me like talking like him and he ended up walking out of the graduation ceremony. I keep it there to remind me to not be a dick. Mr. Meadows… he’s a fucker - fuck that dude.

So it says “Life” underneath it, it not like life - it’s the last name of my homie Corey Life. When I was super young I used to always go to his house and that’s where I first started smoking and… got introduced to all kinds of things. I was like 15 years old or something and he handed me this plant with like a bulb on it… and it was fucking opium, from like China or something, I don’t know how he got it. Corey has been a heavy presence in our life—he’s a pretty crazy dude.

This was my first tattoo, i just turned 18 and my Dad told me not to get tattoos ever, so I was like, I’m getting a tattoo. My Dad found out because someone at school told him. Someone at school saw it in the locker room and they called my Dad.

I have an unnatural hatred towards cops. There are a lot of people that are good cops, but it pretty much means all cops are bastards… and they suck. Their genuine life goal is to fuck us over. That tattoo is pretty cut and dried.

I was at the OSS house after some hard partying and some guy was traveling through and I convinced him to give me a tattoo for like 10 bucks. He drew it up and I was like, dude - this looks like shit. I look over at Tony Malouf and he was passed out on the couch, because he was partying with Lizard King and some heavy skaters. I had to wake him up and he like drunkenly scribed it on me and it somehow worked out. As I was getting the tattoo I fell asleep, I woke up the next morning and didn’t even remember it.

This was from when that fool killed all those people at that church. When that white dude walked into that black church and just capped those fools… I didn’t like it, you know? There are some racist people in my family and I wanted to fully support and show them that I’m not. WTK is our original crew, but I can’t tell you what it means, ha ha.

7. Always On The Jump

Always on the jump because that’s how I live. I guess I don’t want to be stuck anywhere… just jumping around, ha ha… like a frog.

Getting gully from Indiana to California - More Info 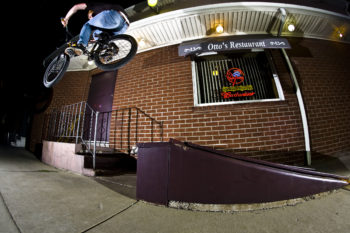 "Capture the vibes and energies of the riders involved, rather than to advertise their potential." 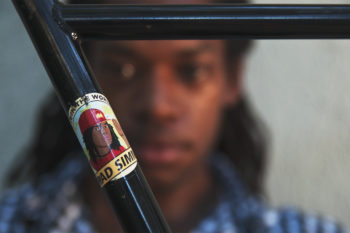 Brad Simms: Have Bike - Will Travel

"How I wanna act… why don’t you tell me how you wanna act?"