Photos by Jason 'Fooman' Colledge | 4Down

Emerson is a name that I have been familiar with for a very long time. Any time you mention Bristol someone will always bring up Emerson and ask me if I know of him or have seen him ride. After the recent Fuk-IT shop stop tour I managed to bump into Emerson whilst at the Crucial 420 day. It had been a while since I'd last seen him and he was pretty easy to spot amongst everyone who was riding there that day. Gold sprayed wheels (tyres included) and doing the most creative riding you would see in a while. I could happily watch Emerson ride all the time; he makes shit look fun and way way wayyyy too easy. Not to mention the style that gets thrown into these simplistic concoctions. After the Bristol shop stop I had a little chat with Malouf, conversations rolled and Emerson was then added to FIT… perfect!

I like to visit Bristol at the best of times so having the excuse to go there and spend a few days shooting and 'filming' with Emerson was perfect. You can’t really go wrong hanging out there and riding some real good street in the company of a good crew. And, it gave me a chance to get to know Emerson a bit more. Holding down the 9-5 and being as productive as he is is always a big plus in my eyes. Three days riding and more than enough productivity - keep your eyes out for this guy, he’s going to be a name that’s sticking around!

So you’ve just been put on fit, how’s this going?

It’s a bit overwhelming to be honest but yeah it’s going all good. Bike feels amazing and FIT just seems like a super friendly crew to be a part of so well happy with it!

You met the FIT crew on the shop stop at Crucial in Bristol, how was it meeting the squad and how did it feel when they asked you to join the crew?

Yeah I met all the guys at the crucial BMX shop stop on the FIT UK (FUK-IT) tour, which was real good. Everyone seemed cool and the atmosphere was amazing at the jam. Like I said before I felt a bit overwhelmed to be honest, FIT’S been one of my favourite teams for a long time and to be a part of it is a pleasure.

You have a very unique style of riding, who inspired you to ride like this?

I’m not really sure to be fair. I’ve never been one to watch a video and be like “damn I want to do that” I just kind of make it up as I go along to be honest. Think having Peg Hill as a local played a big part in it, it’s got a bit of everything but nothing’s quite right so makes it very difficult to ride, and produces some very unique riders. As for being inspired it’s strange I actually buzz off the pegless riders a lot more. People like Nico Badet and Seamus Mckeon who are just doing what they do are definitely favourites. I’ve said it many times before though and I’ll say it agai… jeff kosics is my favourite, the two peg nose dives and big pops is definitely what I’m into. Most things I learn are accidents that turn into something that can actually work which is always enjoyable. Definitely don’t have a preferred aspect of riding though, I like ramp and park riders just as much as I like street riders and the kind of underground scene, not into any of that salt about what you ride.

What’s an average week for you?

Average week consists of working Monday to Friday 8 till 5. I’m pretty lucky really with how chilled the company I work for are though. They let me leave early or have time off for trips and stuff, pretty lucky with that. After work normally ride Deanlane or a bit of street in Bristol. If I’m not riding I will be at home chilling with the lady. The weekends I normally just end up riding with the usual crew and have some laughs! So yeah, a lot of riding usually. Living in the UK this all depends on the weather.

You skate quite a bit; do you think this gives you a bit of a creative boost to your riding?

I’ve skated longer than I have ridden. It’s always been like the true love, I try to mix it up and maybe skate once a week with the skating homies if they are about. I fee that it definitely has an impact on my riding for sure, like I love skating mini ramp more than anything and lip tech on the BMX is one of my favourites. Sub boxes are usually where you will find me on a board or a bike haha.

You’re located in Bristol, there used to be pretty big scene, what’s the scene like now? There seems to be crews popping up all over.

Yeah living in Bristol now. But before that I lived in Yate and used to ride nothing but Peg Hill skate park for at least seven years of my life. So I never really got to see the older Bristol scene, which is a shame because it looked banging. The scene is definitely growing now though. More and more people seem to be moving to Bristol and Crucial store definitely plays a big part with putting Bristol on the map so big up to those guys! There have always been quite a few crews in Bristol but it feels like over the last couple of years everyone’s kind of coming together and riding together, which is always nice. Just trying to get the scene back on the map really.

YateTape is basically just the crew and the name of the videos. It’s quite odd really because none of it is filmed in Yate and there’s only a few of us actually from Yate. So it’s more of just the name to be fair. Debated changing the name but seems kind of pointless because it works.

You’re quite partial to filming and editing. How long have you been doing this for?

Yeah I just felt there was so many good riders and joke times around me yet no one to video it so decided to just get a little mini dv cam and it escalated from there really! Probably been filming for about five years now with the help of my mates. Few of them have camera set ups too so it all just gets merged together. YouTube tutorials taught me editing on premiere pro and now I’m just stuck on it. I don’t think I would want to use any other software to edit; I really enjoy the whole editing side of it.

What setup(s) do you use?

Well I have become a bit of a camcorder hoarder over the past five years so I have quite a few. My camera of choice is definitely the trv900 that I have two of. Also use the vx2000 a lot but the majority of the camcorders I have are just random TRV’s all mini dv. Love how they work, feel and just the way the footage comes out. There’s definitely an art to using SD cameras. Rather than just pointing an off the shelf Argos cam at someone.

Does this explain why it took you three weeks to film and edit the your welcome to FIT?

Hahahaha well yeah it does I guess, I’m one of those people who has a long list of spots with what I want do on my phone, even to the point that I make lists for my mates and know what they want to do on the spot. So yeah I have a list of things to do just in Bristol alone and reckon the welcome edit was probably about 30% of the list completed so there’s plenty more to come. Also just having mates who are willing to put the effort in to pedal somewhere just to film one clip is definitely a bonus, many thanks guys!

Anything you’re working on now? Any trips planned?

Well I might have a little YateTape project on the go as we speak but I like to keep them on the low down until they’re ready. Trying to organise a trip to all the reservoir and dam spots around the UK

Repping The South Of The UK - More Info 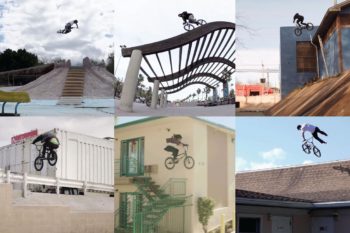 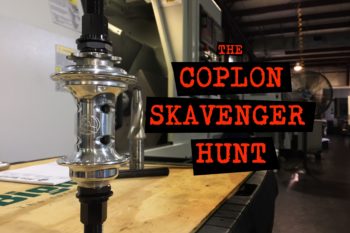 An original prototype could be yours...