"I wish to keep going forever like Brian Foster, at least until I am 60 or until DIG prints bi-monthly issues again."

Ever since we've know German banking overlord and street legend Max Gaertig, he's been a die-hard brakeless advocate. You may have noticed you've not seen quite as much of Max out in the streets and that's because he's now usually lurking in the woods riding big ass trails. He thought it was about time to build up something a bit more suited to the dirt, and this disc brake Wethepeople / eclat rig is the result. Scroll down for more...

Since we’ve know you you’ve been brakeless. What’s with the brake? Do you still have a brakeless street setup?

For me this is a big change, but it happens at the right time. I started riding without brakes in 2000 and never felt like change was necessary since then. However, 2022 was an intense year with less sleep than usual. Also, I rode MX trails near Antwerp for the first time and the jumps there are huge. Sleep deficit made me crash a lot more on jumps, had a rough one in the end of October, and this problem combined with riding bigger trails made me consider maybe building a dirt bike with a brake at some point.

By mid-November Wethepeople Dave told me that there is a prototype bike designed by Tyson to test, with a longer frame which is something I had been asking for for a while. Only catch was that it had a disc brake. Well, I just thought that it was perfect how this aligned with my plans, so I had no objections, haha. The bike in general, but especially the long frame, is simply amazing, doing whips with it reminds me of my Warriors frame from back in the day.

Now I am riding the Chaos Machine on Dirt and in skateparks, and my Buck-bike on street.

Do you find it weird transitioning between the two? Does the trails bike feel much different?

Yes, it is very weird indeed. The Chaos Machine is much longer with high-leverage bunny hops, sooo much fun on any transition. I am flying to Barcelona next week in order to finally ride some trails with it. Afterwards, when I am going to ride street with the other bike I will probably ass-land everything for hours.

What’s it like riding with disc brakes? Can you give us some pros and cons?

It feels crazy, the response is so quick. But most of all, I have no idea how to use it while doing tricks, I will have to learn having at least one finger on the lever mid-air before even considering doing my first fufanus. I am looking forward to it though, I have been riding a lot of street in the last two years and a little change promises to be fun. In a way, it signifies the transition to my growing up. I used to be all about alcohol and street riding, nowadays I am also interested in surviving and riding transitions.

A pro is that I will hopefully not have rough crashes anymore.

The only bad thing I can say about it is that I cannot pedal grind on the left side without seriously endangering the disc.

You've ridden the disc brake setup in the streets, right?

First time I rode the Chaos Machine was at one of my favorite street spots in Bonn called "under the bridge" (the concrete waves). If I know that a certain street spot has transitions or just more hops instead of grinding, I would bring the setup for sure.

How are you liking those new éclat trails parts? What’s your favourite?

They are sweet, the seat is one part I particularly enjoy. It provides a comfortable lean and also looks like it belongs in the woods or in old wild west saloon.

What have you been up to these past few years?

Trying to age gracefully, middle class life, job and all. A lot of Yoga and friends make it possible for me to keep riding BMX which still is the best activity to achieve mental balance. I wish to keep going forever like Brian Foster, at least until I am 60 or until DIG prints bi-monthly issues again. 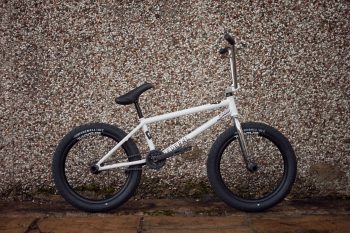 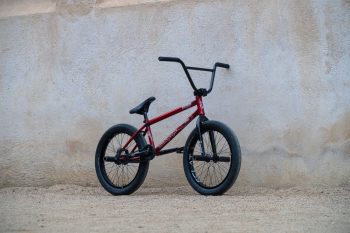 And His Wethepeople Trigger Build