The story behind THAT Belgrade curved wallride train

With Erik Elstran and Luc Legrand

Words and photo by Hadrien Picard

Belgrade is pretty much curved wall ride heaven and that's part of the reason why I was really happy to bring Luc Legrand an Erik Elstran, two of my favourite riders, to Belgrade for a week of creative street madness last summer for the Grand Belgrade Hotel video. At first, their riding styles may seem completely different but they both shred on their bikes in a different way to what’s fashionable right now... and they're really nice guys.

Luc had already been to Belgrade twice before and knew some really good local spots. Actually, he once pulled a crazy wallride down some stairs there that made one of the best ever covers of Soul Magazine. And we were on a mission to find more...

Erik (also a curved wall ride master) really wanted to revisit another one that Luc had hit last time he’d been there. We arrived pretty late the first couple of days just to get a look. Erik was really motivated to try it so we came back on the last day. It's one of those things that seem easy when everything works but at the same time can be a total disaster if one little thing doesn’t go to plan. In fact if you look at the photo there is a drain pipe that you have to ride under,  but that line helps you pull the wall ride and not hit your head on the way out, so it’s a good thing.

The best curved wallride ever? - With Luc Legrand and Erik Elstran

So here they are, trying to do a train on a curved wall ride down some stairs. They did it perfectly on the first go but were a little too far from each other to get a good photo… so they just did it again like it was nothing.

In the end I asked them just to pedal towards the wall to do the run up: Erik couldn't resist doing it once more so at the very last second he went in. Luc was following so did the same, but wasn't going fast enough and crashed at the end. I was on the top and just heard a loud sound so I was worried that he was badly injured. Fortunately it was ok. We left happy to have the clip and photo... and especially happy that nobody got hurt. What was that about one last try? 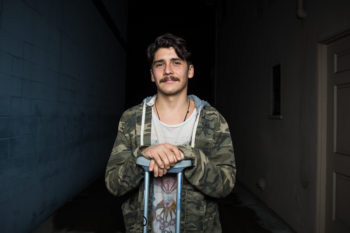 "I was put to sleep without knowing if I would wake up with one less leg." 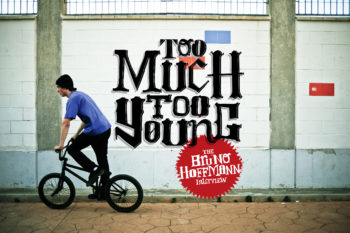 Re Print: The Bruno Hoffmann Interview - Too Much Too Young

If you go your own way, you cannot be overtaken.