There is no denying that BMX has changed. The "old school" and "new school" debate it daily. The comment wars on the internet show the disparity in opinion in the harshest of words. And the styles of riding that we see are sometimes so different that it feels like we riders have little in common with large portions of our own culture. The way we chose to portray ourselves through videos, clothing, and our attitudes certainly doesn't help to forge unity amongst us like it once did. And the debate rages on: Should you label yourself a "rider" or a "street rider," a "ramp rider," a "trail rider," etc…

But I am here to say, in short: It doesn't really matter. This is freestyle and you can call yourself what you want and do whichever tricks you wish…hence the word free. That's how we started and that's how it is. At least it should be. People have a tendency to say that "freestyle isn't what it used to be" and then go on to degrade what is happening "nowadays." "Rider used to go fast; now its just dancing on pegs." Or "The new colors and styles in BMX are so ridiculous; BMX isn't a fashion show." I would reply to that with: Who cares! If you don't like those things, go do your own thing! Things today are different in many ways, but that's because the world is a different place. Things change. Get over it. Is the clothing or trick choice of riders worth stressing about?

Should we all just give up on riding because we don't like that freestyle has changed and adapted over time?

Frank Clark of the Kings and Ace’s crew. This was his makeshift quarter, and he took advantage of turning it down.

Not sure what happened to Lee Bennett during his runs. He simply disappeared fulfilling his persona as a man of mystery. But, we were able to capture a couple clips of him during practice in the smaller bowl section. Cranked lookback. Always dialed.

The biggest mistake regarding Mark Pyatigorsky’s biography is his country of origin. Everyone calls him “Russian Mark.” He’s actually from Kazakhstan. Tabe from the camel hump into the over vert pocket. Mark is holding down 3rd place in the 13 to 15 overall standings.

The answer to that question: Absolutely not. My experience in Florida at the 3 rd stop of the FLBMX Contest Series is just one example of why the changing nature of BMX is irrelevant to the general awesomeness of why we all started riding. As I stepped out of Matt Coplon's car at the Sarasota Payne Skatepark last weekend, I was immediately greeted by a rider named Alan. Within a few seconds of meeting him we began to discuss the weather, the park, and our riding plans for the day. We laughed and talked shit like old friends and then headed our own ways to begin the day. Alan looked to be past 40 years old (43 actually) and almost 10 years older than me. Later I would see that his brake-laden bike and full-face helmet were quite different than my brakeless and aggressively-angled ride. As I watched him compete in the 30-and-up class I cheered. The 16 year olds on the deck cheered. The brakeless kids cheered. The 2 pegs and gyro guys cheered. And when the class ended its runs, high fives and congrats were given freely by all and to all. Immediately after, I headed to the foot-tall ledge section while others headed to the 9-foot tall bowl area. We rode. We laughed. We learned. And we did it with new and old friends.

Nick Murphy: Nose jam while grabbing the seat on a wooden obstacle. Always a treat to watch Nick cruise cement, unfortunately, I couldn’t grab a pic on his natural environ.

"My experience in Florida at the 3rd stop of the FLBMX Contest Series is just one example of why the changing nature of BMX is irrelevant to the general awesomeness of why we all started riding."

Brian Fox drove down from his new residence in North Carolina to haul ass around the course. 3rd in Pro, I’m pretty confident no one went as fast nor as high. Lookback on a 24 hour old obstacle.

Chelsea Fitsgodin: Classic tabe on one of the most treacherous quarters at Payne. The pool coping alone (besides the size of the transition) can be death.

Later that day, I tried (and failed) to ride the big ramps. And other bowl riders came and shredded the ledges and rails. By the end of the day I had met more people than I could remember. And though their names escape me now, I do remember this: We were all having fun on our bikes regardless of how many pegs we had. We gave high fives for feeble grinds and tailwhips. And we were one big family after only a few hours. The Florida scene is about as diverse as any I have seen, but the sessions were not segregated. That weekend I rode street with "ramp kids" and rode park with "street kids" and no one thought twice about it. My pants were tighter than some, and my choice of headwear was different than others, but in the end, the brotherhood of BMX was strong and positive the entire time I was there.

Keaton Aspuru can boost. Always a treat watching him during Open practice. Tabe on the 8ft…Mike Dominguez would be proud.

That is freestyle BMX. That is what I started riding 20 years ago to be a part of. That is all that matters "nowadays." BMX has been called many things, but at its heart, it is freestyle in every sense of the word. Have your own style, think freely, and be part of the family. Who cares about anything else! - MH

These two photos of Riley Jordan were taken within the first 15 minutes of practice. Watching Riley cruise is nothing short of a treat…to the moon.

About the FLBMX Contest Series

The FLBMX Contest series is in its 5th year. It was started by Marty, the owner of Kona Skate park. Being a skater he felt there should be a BMXer involved and knew I was already doing my own events. He reached out to me jump on board. The first year incuded 3 parks along the east coast. From there, I added some new parks each year and it's now a 5 stop points series with new parks being introduced each year. We try to do the stops at 5 different types of parks so that there is something for everyone each year. The turnouts have been great and growing, not only the amount of entries but the amount of spectators and guys coming just to ride the park for the day. We have been very fortunate to have awesome brands behind us to help keep this going. For more info on the series and Florida BMX in general go to FLBMX.com - Dave Brumlow

The FLBMX Contest Series is just one example of why the changing nature of BMX is irrelevant to the general awesomeness of why we all started riding. - More Info 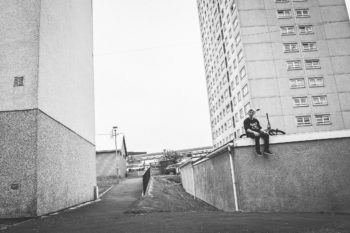 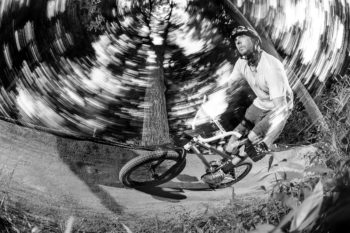 Re Print: Jay Lonegran - Over 30 and Still In The Woods

A dedicated soul who has found something more to BMX than just doing tricks on a bike...