"Frothin' on the fresh rig!"

Aussie trails riding fanatic and high-speed transition ripper, Tyson Jones-Peni has found a new home with Wethepeople after a long spell with United. We caught up with him as the new year kicked off to see how his new hookup came about, as well as get a squint at his fresh roasting device.

BAR: Back Bone BMX Kicked Out

MODS: Run my bars uncut, no spacers under the stem, knock the bars forward from the forks a touch, back wheel at 14.25”. Tires at 75psi front, 80psi in the rear.

Tyson how’s life man? What have you been up to?

Not bad mate – just got back from a hefty trip up to see the folks for the Christmas holidays, which is a round trip of over 3000kms. Got to ride a few parks, swim in the ocean. It was a good break from a hectic year.

I’m sure most know, it’s affected just about every facet of everyday life – although in Aus we’ve been lucky, and especially where I’m from in Canberra. There’s been a lot of social distancing and the initial lockdown, but in Canberra the lockdown was less severe. We could go out and exercise, but the skateparks were closed. From a BMX perspective, we were mainly in the trails anyhow - so we weren’t seeing anyone, anyway [laughter].

You’re riding on some fresh wheels for 2021? Can you explain how the Wethepeople gig came about?

Yeah, frothin on the fresh rig! During the initial COVID lockdown, I was doing a lot of reflecting and I just felt it was time for a change, so I made the decision to leave my previous sponsor. I’m always on the phone to Scott Shepherd, who heads up one of the major distros here in Aus, BMX International. We’ve been mates and doing business for fifteen years with the shop and were just chin wagging. I told him I left my old sponsor & was probably going to buy an S&M or something. I hadn’t ridden a different frame for almost 10 years, so even that in itself was exciting.

Scott suggested that he’d help me out a Wethepeople Patrol and that he’d be keen to pass along my details to the main Wethepeople crew in Germany, but whatever I felt like doing he (Scott) would be supportive of. The more I thought about it, the more it excited me. So I said ‘sounds good!’.

Literally later that night I was speaking on the phone to Dave Paterson, who is the product manager and team manager at Wethepeople, and that pretty much cemented it! It was exciting to speak to someone who is so enthusiastic about BMX and who has an open mind. He also liked that I was a 33 (now 34) year old rider who has been riding for 20+ years and has found what they like riding - pretty much just rode trails and bowls – I wasn’t about to conform to a different style of riding just to be sponsored [laughter].

Wethepeople isn’t the first name you think of when you think of ‘trail and bowl riding’ - and that’s what I liked about it. WTP are renowned for making some of the best quality stuff in BMX. Their Patrol frame is pretty close to spot on, geometry wise. So it was exciting to think that I might bring some ideas to help influence an expansion of trail/bowl related products.

You’ve been spending a lot of time on the bike the past few weeks, how’s she running? How are you enjoying the Patrol frame?

Bike is running hot! I’m into the mellower 74.25 degree head angle, something I haven’t tried before so I was hyped when I felt the difference. Always stoked on the 11.5” BB too – I feel it’s the perfect height for jumping, fast manuals, etc.

21.5” top tube and no pegs, I guess this thing isn’t hitting the streets any time soon right?

I like street riding, I’m just not very good at it [laughter]. I have always enjoyed the faster, more ‘simple’ style of street riding that someone like Chris Doyle does. I’ve done some scary stuff (for me) on the streets over the years, with no pegs and all on a 21.5” top tube with a 14+ inch back end. It comes down to if the setup looks cool – and I think the risk is worth the reward, which is becoming less and less so, considering hitting a jump is way more satisfying [laughter].

What for you makes your bike special and your own? Do you do any modifications?

I run my wheel way out the back of the dropouts – I like a long back end. I actually had to file my brakes out where the brake pads attach, so they would hit the rim properly. I run my bars knocked forward just a bit, I like the way it feels to nose in on a landing. I run no spacers under my stem with 9” bars. I used to run my seat slammed, then over the years it moved up, now it’s coming back down. Trying to recapture my youth maybe [laughter].

What’s one part on your bike you can’t live without?

Maybe brakes? I don’t tend to run brakes for a few sessions when I build a new bike, just for fun. But when you’re at the trails, it makes more sense to have brakes to slow down if something goes wrong, rather than risking getting hurt hitting a tree at full speed while trying to pull out of the line.

I also run the Eclat Maverick cranks because I have a gnarly scar on the inside of my ankle from the crank that is like tissue paper, it tears open so easy. The Mavericks have no sharp edges at all and I haven’t had any problems since I started running them a couple years ago (knocks on wood).

You co-run one of the busiest BMX shops in Australia, Back Bone BMX. How has the past year been with the shop during the pandemic?

So far we’ve been really fortunate – there are some industries, like hospitality, that have had it pretty damn tough. But luckily the draw of riding bikes held strong and we’ve been quite busy. We like to run a lot of events, jams etc and had a bunch that we had to cancel unfortunately.

There has been some ups and downs, but for the most part, I think the pandemic has made a lot of people realise that keeping happy is important – and for a lot of people, that means continuing to ride BMX, or starting to ride again. Thanks to everyone who supports Back Bone, it means a lot always, but especially in this wild as hell time.

You seem to be starting the year with some great vibes, what plans have you got in store for 2021?

Thanks! In the shop we’re gonna be running a lot of jams – I run the ACT Jam through the shop with my business partner/best mate Rhysty, so we’ll be making that happen again, which is always a great time. We’ve been doing some heavy mods for a lot of last year at the trails, so it’s almost time to ride that in properly. We had a couple of test whacks at it, but there hasn’t been a lot of riding going on in there. I probably rode the trails two or three times in five months. So it’s exciting to think that we are so close to enjoying the hard work that my mates and I did during that time.

I also coach freestyle BMX, so that’s going to be ramping up in the new year. Everyone from a 3 year old on a 14” WTP Riot, to a 65 year old who is also, just getting into BMX. It’s been super fulfilling to help riders learn new skills, and most of all share how rad BMX is to new riders.

I heard a rumour of some new products you’ve been working on with Wethepeople, care to share any details?

There’s definitely some badass stuff on the horizon.. I’ve had the chance to share ideas and work with Dave at WTP almost daily for the last few months. That’s has been a rad process in itself, to collaborate in such detail to refine & push an idea that ends up exceeding your original expectations.

Regarding details, all I can say is, there’s going to be a badass frame that is made to go fast, that’s built unlike anything else out there. If that’s your deal then we’ll have the Chaos Machine for you..

Thanks to Wethepeople for the opportunity of course, Eclat for the badass parts, Vans Australia for the best shoes. Thanks to Rhysty my partner in crime at Back Bone BMX, it’s sick to keep the dream alive at the shop with you. Thanks to my wife Melissa for the endless support and encouragement.Thanks to the Snail trail crew who are the ultimate bringers of good times and constant inspiration. Thanks to all the crew who support Back Bone, be it customers or team riders or homies, it means a lot. Lastly, thanks to all the trail builders, bowl rippers and smooth crims past and present who get me stoked on what I love about BMX the most. 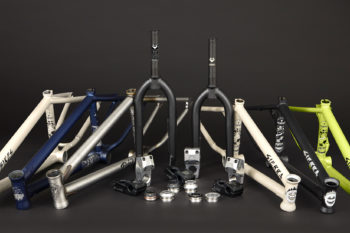 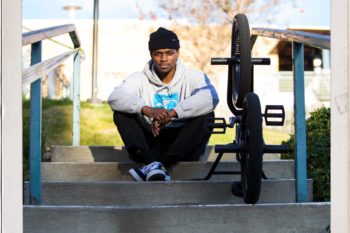