Wisdom Of The Ages: Jason Enns

5 pieces of wisdom from the legend himself...

"A clip of this was in my Volume 'The Finer Things’ part. For the video, was one of things where we had to do so much prep- dam the water, scrape the algae. I took Garrett Byrnes here this day just to show it to him. I’ve never seen it dry before that day. Garrett ended up doing some cool shit here. This is a spot that is really close to everything."

At 39, it’s safe to say Jason Enns is content with whatever he chooses to do on a bike. He’s long past losing sleep over filming some banger clip for his next web edit, stressing over stacking clips during a sponsor-funded trip, or stepping up his flat ledge repertoire. A lot may have changed for Jason since the days of having the opener in the seminal video “Criminal Mischief.” But some things haven't- he continues to be sponsored pro, continues to kill it.

During the recent Pool’s Gold trip with fellow C.M. alumni Van Homan and Garrett Byrnes, they shared a lot of stories, experiences and philosophy, both about bike riding and life in general. Here’s five pieces of wisdom recorded from Mr. Enns during one of those conversations:

1. Moving from the Criminal Mischief video era to today:

So many things have changed. Yet I feel like I’m still doing the same thing. Its hard being in the position where you feel like you need to do certain tricks or ride a specific way even though you're not into it. I’ve gotten past that recently; just do what you want. I’ll go on a seven-day trip and get one clip, if I can't find anything I want to ride, I won't force it to get a clip. Part of the motivation you used to have to do something was that it would mean something; it would go in a video and be memorable. To me, that motivation is gone. People are doing the gnarliest shit ever, and no one talks about it for more than a day or two or until the next web video comes out, and you're lucky if anybody remembers it.

Carving opposite over a pool stair set for the first time, I get that same feeling as when I’ve done any of my gnarliest shit. That’s only the feeling I’m looking for; if I can get that from carving over the stairs then fuck it, I’m going to do that. I just strive for that feeling. "Modern" street doesn’t give me that feeling much anymore, unless I find a cool or unique set up. When I did the backwards predator, that was a different era for me. At that point it was, if I get this trick, I had a part; if I didn’t, I have to quit. I took a specific trip to Arizona to get that clip. I couldn’t get it, it was the last day, and that’s what I was thinking about. None of that shit matters now. If I can carve over stairs with a smile, that’s what that matters. Its been amazing to have the support of brands like Volume, Demolition and Lotek to support me throughout all the phases of my career.

"This sums up why I moved to California. The palm trees, sunset. The scene here was actually the opposite of this photo. Just the shit that happened while we were there. There was a hooker selling herself twenty feet away. It’s still a functioning hotel. This is the first stair set I actually aired over. This pool is a street spot; you do a curved wallride, then jump the stairs. People say it’s not street, but I think it is. Everything that wasn’t made to ride is classified as a street spot, I my mind. This involves all the same stuff- dealing with an angry neighbor, having to jump a fence, the cops, security."

2. When that point of no longer being a professional rider/ riding comes:

You know how many people I know who stopped being a professional rider, and never touch a bike again? That's seems insane to me. So you’re mid-twenties with no work history. Now I’m almost forty, an immigrant with no work history; no one is going to hire you. You get hurt a few times, and you question what you are doing it for. If all you’re going to do is end up with nothing, why don’t you do what’s fun?

I’ve come full-circle. You start at a fun level, and then as you graduate to a certain level, some of that gets lost along the way. I feel like I'm back to that position where it’s like, "Fuck it, it’ so fun, I just can't see myself ever not riding.” When the basis of what you’re doing is fun, it translates to the viewer; people have fun watching it.

"I have a passion for the desert now. Some people hate it, but I like it. It probably has something to do with where I was raised and how cold it gets, and how much snow you see. This is the polar opposite, to come from there and be here. This sums it up- fucking hot, sunny, dressed in black. The road will never end. If you go up and get a flat, that’s the end of the day; you’re not going back to the car, fixing a flat, and hiking back up. I try to pack whatever we might need. The broom is a necessity; whatever pool you ride, there’s going to be a broken bottle."

3 .The spark for pool-riding passion:

After I hurt my knee, and I got to the point where I could pedal around again, but I could only ride in baby steps. I went to the skatepark and just carved around; I felt like it was stupid and I didn’t want to be there. I started to going to a local pool where the fence was cut open and I’d do laps in there. I wasn’t doing anything, but I felt like I was riding. At that point I couldn’t ride that hard, but I could go out and spend a day looking for something and carve. I’m out doing something. If you go to over the light at a skatepark, it’s lame. If you go over the light at some random pool in the middle of nowhere, it’s pretty cool.

"This is one of those rare situations where you can mix a line outside of the pool into the pool. I would hit the rock to rail for fun anywhere else I’d see it anyway; usually it’s just the pool."

My blessing will be that I've never made a lot of money, so when I transition into normal life, there is a good chance I will be okay, which for many people it will be the opposite. It would be nice to live a life not worrying about how I’m going to pay all the bills, heath insurance, or mortgage; I can only hope that side of things only gets better. Everything is more fun now. All I want to do is ride cool shit. It’s gone back to the point where you’re working a shitty job, and all you can think about is riding.

"It almost looks like I can do inverts again. I stopped doing them for a long time because that’s all anyone ever wanted to shoot. One day I tried doing them, again and I couldn’t do them right. This was one of the days they were working good. If I’m over a hip or something, I’m way more consistent."

"This is Tiger and Tonka. They’re the best dogs. Pitbulls are badass. They’re both rescue dogs, and products of bad breeding. They were set to be euthanized the day I got them."

"I don’t even feel like any of this graffiti is serious; it’s just kids being dumb and writing shit.- who knows. You can kind of gauge if you’re hitting a pool that’s kind of untapped or unknown if there’s no graffiti in it. Once you see this, you know it’s a spot people just hang out in; you’re not the first to be there."

5. The secret to bike riding longevity:

When Garrett Byrnes and I hiked up that hill to a pool on that trip earlier in the year, I’m like, “Fuck, this was what it was all about.” We left our bikes at the bottom, and I wished we brought them up. Even beforehand, we saw a photo. It’s a gated community, but I knew we can get in. I learned that from Rooftop. “That sign is for other people, not us.” My desires have changed broadly over the years. It comes down to the same passion.

"This was the first corner-pocket fastplant I’d ever done. I had never even thought of that as a possibility until I saw that Vans Dak ad. I’ve been looking to do more, since it felt so cool." 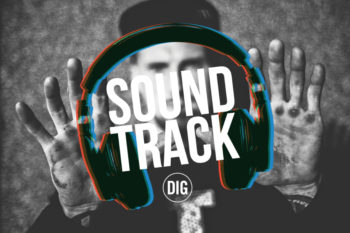 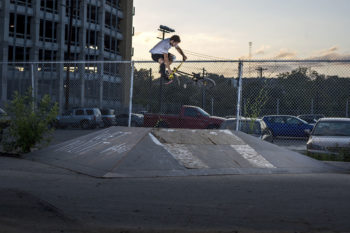