Forgive me, but the launching point of BMX is a transition. Usually consisting of a curb-cut, dirt lip, plank and brink, whatever it may be, the origin of our collective addiction traces here. From there the paths diverge, even more so today with the extreme fragmentation of the sport. The focus of our attention today is on entirely angular setups. No need for an imaginary compass to trace arcs while evaluating a new spot. 90 degree stair sets and flat ledges with 45 degree rails are plentiful and seem to compromise the consideration of most.

This is not to say it’s to the demise of the well rounded rider. On the last couple trips with Chester Blacksmith, he repeatedly daydreamed out loud for a trip with a shifted focus from driving a van in LA from deadman setup to bust spot to flat ledge, and instead riding spots of his choosing. It may come as a surprise to some, but pros don’t usually do roof to rails while at home, it’s normally a couple hours at the park after a warmup pedal to the coffee shop. Taking him up on this, I organized a trip to meet his wishes: a week in Southern California with the sole mission to ride all the incredible pools and ditches that Jason Enns continually wets us via instagram without any pressure to fire out ‘the banger.’

doubles on the immaculate ditch

Chet’s motorcycle, outfitted with his bike attached to a welded Park Tools clamp, pulled in my East Hollywood apartment the day after Dan Foley’s plane. My friend and next door neighbor was in Canada for the week, and he offered Dan and Chet his place to crash. Chet famously hates LA, understandably, since his history in the area usually consisted of TM-ing a bus through congested traffic for WeThePeople or crushing bones for Jeff Z. Maybe the pace up in small-town Oregon he’s used to is a bit slower? I’m not certain. Regardless, with the organizing duties passed on to me, a free furnished apartment, and riding distance to Sunset Boulevard, I’d hoped to quell any anxiety Chet may have had. Dan had only been to California briefly, and only in the southern beach cities. This trip would be all new for him essentially.

The plan was to be out of the house before noon. We didn’t get wild at night, all had a bed to sleep in, and were close to coffee and food. If only LA were that easy. We met up with Andrew Jackson, who brought out his regular riding mates Brian Terada and AK. Being locals and active pool and ditch searchers, they helped us know where to go. The six of us would brainstorm for the following day, usually picking two or three spots to try to hit. Despite all this, we didn’t touch grips till at least five without fail.

a week in Southern California with the sole mission to ride all the incredible pools and ditches that Jason Enns continually wets us via instagram without any pressure to fire out ‘the banger.’

It was truly baffling witnessing the paradox of amount of planning and hour at which bikes were pulled. I can’t even really give a good explanation looking back, besides the combination of San Fernando valley sprawl and roundabout routes. Lots of the wasted driving time was accountable to human misjudgement, but the real culprit was the nature of Los Angeles. Yes, we constantly witness the riders living there ride incredible spots of all kinds. But it really is work finding and getting to them. We outsiders weren’t used to this. On one of the days, we met up with Fish in Long Beach. His housemate Juaquin Silva had told Chet that we should come down and that he has spots for us. Great! So we meet at the house, and all caravaned to the first pool- it was an hour and a half away. Then the next pool we went to was ‘down the road’ further away from town. Once done riding for the day, we had a two and a half hour drive back to our apartment in Hollywood. And that was with no traffic or stops. But the thing is, those two pools we spent all day driving to get to, and only rode for a short time, were incredible. Drained, cleaned, hassle-free, and scenic. They were awesome, and we all had a good session. It was well worth the effort.

It’s all smiles at a pool session and we were fortunate to hit four of them plus two ditches with a wide crew. They all had character no doubt, but the two that stand out were the underwater soundstage from old Hollywood which was situated by one of the Manson Family ranches, and the old dairy farm pool. The only time we got kicked out was bizarrely by someone sleeping in a shitty car. The pool we were trying to hit was a quarter mile off a small mountain-top road. He wasn’t guarding the place officially even, and never got a good answer as to what he was doing. Your guess is as good as ours why he belonged there.

It’s an effort to ride pools and standout ditches. There’s definitely a lot of work to be done finding them as opposed to spotting the next rail while driving by. Transition spots may not be for everyone, but for those interested it’s hard to beat the American Southwest. Whether or not this trip changed Chester’s view of LA is uncertain, but at least he got to enjoy a bangout week catering to his dream concrete.

It was truly baffling witnessing the paradox of amount of planning and hour at which bikes were pulled. 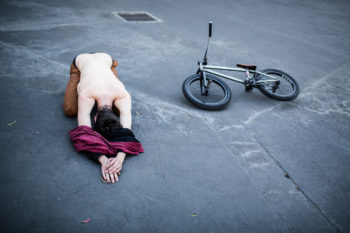 David Grant - All Who Wander Are Not Lost

How a few choice words from a High school teacher in Muncie, Indiana, lead to him picking up a bike and traveling the world 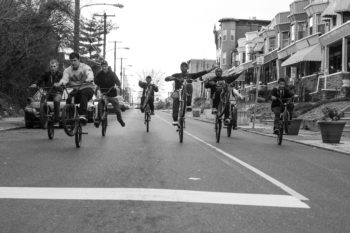