About four or so years ago, peculiar long black rectangular stickers with a bold white phrase started appearing in the vicinity of spots all over the Philadelphia area. It was pretty apparent this crew, whoever they were, had been scouring the city pretty thoroughly. The Chocolate Truck crew had arrived.

Fast-forward to 2013, and this group of friends (primarily from the Philly suburban town of Levittown, as well as a few members from neighboring Havertown and Phoenixville) released a self-titled full-length video that became arguably the most talked-about independent release of the year, and rightfully so. It’s overflowing with talent (many of the featured names unheard-of prior to the video’s release), dope spots, and most importantly, also an acute cohesion of friends having a good time together, which is apparent throughout the entire video.

Joe Niranonta, wallride over bench about 80 miles from Levittown.

Six years ago, Matt Miller had just started college and moved to Philly: “I was the only one of our crew who lived in Philly at the time. A little while after we were already filming a video. Once Joby, Steve, Kevin and I got a house together at 18th and Berks about three years ago, it became a nice hub for the whole crew. Everyone would come down every single day.”

Once that house was around, the first Chocolate Truck video was well on its way. “Everyone’s footage came from that time onwards, other than Kevin; he has shit from when he was 15 or 16, and the video came out when he was 21.” The dudes who had full parts in the video were also a reflection of who makes up Chocolate Truck crew. “It’s pretty loose. Basically, the crew is everyone who has a part in the last video- Carl Brown, Joby Suender, Steve Tassone, Nick Barrett, Me (Matt Miller) , John Yoh, Mike Swift, Joe and Ryan Niranonta, Kevin Vannauker, Brendon Reith, Dan Bob, and B-Dub (Breyon Woods) is the youngest.”

There must be some kind of hidden meaning, or inside joke behind the name Chocolate Truck, right? Nope. No meaning at all, just two non-related words that seemed to work well together- kind of like the crew themselves (the Niranonta bros an exception). Nick Barrett sums it up: ”I’m pretty sure we were talking about truckdrivers at the time and it ventured off into other stuff. It was pretty random.”

”I’m pretty sure we were talking about truckdrivers at the time and it ventured off into other stuff. It was pretty random.”

Back to the infamous black rectangular sticker with bold white writing. Chocolate Truck stickers are randomly seen at various Philly area rails, buildings, phone booths, and even yellow school buses on which sometimes they are spotted, and of course bikes. They’re practically a valuable commodity these days. “We were going to make different stickers, but it’s distinct and easy to recognize. You can read it clear as day. People don’t know what the fuck we are, see the sticker on my bike and ask what it is; they see it everywhere.”

John Yoh, rail hopping in F-town, with Matt behind the lens.

Just another day under the El.

Most notorious about the Chocolate Truck enigma is not the stickers themselves, but the Chocolate Truck full-length video. It’s a shining example of what a little dedication, a group of friends hell-bent on nothing more than having a good time on their bikes, and an almost endless landscape of prime spots dotted all over one of the largest cities in the U.S. can result in. “It was such a long-term project. There were so many points when I didn’t even think it was going to come out.” After it was finally completed, premiered on their home turf, and DVD copies started filtering out into the world, people recognized.

Kevin Vannauker, casual double peg to hop over in you guessed it- Philly.

Joby Suender, smith on a Northern Liberties I-beam configuration that no longer exists in this form.

Sout Philly barrier ride to smith by Nick Barrett, before his bike disappeared out of the back of his truck on 2nd Street a few nights later.

Word about this almost completely unknown Northeast crew making a dope all-street full-length video spread like wildfire. Matt was stunned. “The reception we got from the video was cool. The coolest thing for me was realizing how big the scene is in other countries. Like 70 percent of the video orders we received were international. I’d be writing a Poland address on an envelope, and thinking how that’s so crazy.” And it wasn’t just the international riding scenes who appreciated what this young crew of shredders were doing. Numerous U.S. companies did too, like Fiend, Animal, Kink, and Skavenger: “It was cool to see that everyone got hooked up by some company after the video.” While that’s a nice bonus, all it takes is one day of cruising around with the squad to see that any perks of sponsorship hasn’t changed anything with this crew. They are still continually out cruising every day possible, especially on weekends, with Matt usually behind the camera. “It’s a mob; everyone’s out on the weekends. That’s just how we are; we have more fun that way. You can’t just focus on filming. It’s always a good time. Like today when everyone was riding that ledge spot, it was cool.” Another bonus is that the entire run of DVD’s sold out. Not bad in the free-web-video age, and with zero promotion, only word-of-mouth. Matt’s time spent on producing the video wasn’t based around trying to turn a profit, though: “We made a 1000 copies and sold them for cheap- we weren’t concerned with making money.”

When was the last time you saw a moose in Philly? Matt Miller, taking advantage of a sweet find.

“We made a 1000 DVD's and sold them for cheap - we weren’t concerned with making money.”

Beyond making a great indy video, the Chocolate Truck crew’s growing popularity has also been assisted by their infamous IG account, currently 14k followers deep. While their bike riding pics get a high volume of likes, it’s pretty obvious all the periodic random photos of strategically placed CT stickers on areas of the female anatomy triumphs everything else. Nick Barrett went into more detail: “Whoever is in the crew has the password; it’s like fifteen people. We’re constantly getting tit pictures from girls back home, and they’re more hyped about it than anyone.” Just as in the real world, sex equals likes on IG, and this crew got the trademark on this one.

Nick Barrett, over feeble grind back over, Philadelphia.

"We’re constantly getting tit pictures from girls back home, and they’re more hyped about it than anyone."

This crew out of the Philly area is just one of many all over the country, and planet. These guys also love what other crews are doing, and they all provide inspiration. Some of Matt’s favorites are: “Shark Attack, SAF, Hood Anticts, LFS ALYK , DUB, A-Town Trash, Strangeways, AM:PM, JIB and Stink Pit Basically anyone who does their own shit and puts time into what they are working on is awesome. You feed off of and get inspired other people’s projects. We’re friends with all of them.” He, as well as the rest of the CT squad can appreciate the independent projects put out by these crews, as well as know what it takes to even pull off a full-length video showcasing what they’re about: “It’s better to be patient and put a lot of time and energy and make a more cohesive piece with everyone’s input- if I picked all the music for our video, it would’ve sucked.That’s the most inspiring shit for us.” And CT's not done yet, not by a long shot.

The young gun Breyon Woods, sending it with a massive ledge ride gap into street.

It’s apparent that the brotherhood of this crew transcends any bullshit exclusivity.

The second Chocolate Truck video has been in the works ever since the first one premiered, with Matt once again the main man behind the VX, further documenting their crew and the upward progression. It’s still going to be a while before anyone sees the fruits of their riding in the new project. But just like the last one, it’s slowly but surely coming together, as Matt elaborates: “When you have that many good people in a crew, it pushes you, and it makes sense to keep putting out stuff. It’s going to be a long-term project, and I’m not going to put out bullshit. Everyone works or goes to school. This might be the last full-length video we’ll do. We’re never going to stop, though.” One reason that it might be the last is the inevitable encroachment of life responsibilities as everyone in the CT crew hits Level 2 and up. You gotta pay the bills, and sometimes that means getting a full-time job in the real world. But they all know that it doesn’t mean they have stop riding with each other, as Nick Barrett explains: “Someone is always riding with someone else. This summer more people are working, so it’s been pretty much every weekend, even if it’s almost too much of a heavy crew.” While cruising around with them on any given day, even if their total number seem pretty inflated for actually being able to ride some high-bust spots, it’s apparent their brotherhood transcends any bullshit exclusivity.

“I’m sure someone will have a kid and fuck it all up.”

Nick Barrett on the future potential for Chocolate Truck 4

Sometimes it's more about making jokes than riding. Northeast Philly.

Mike Swift adding a new one to that weird No Libs spot with a gap-manual 180.

And it’s this brotherhood that further fuels the riding sessions; everyone feeding off of each other’s positive vibes. Mike Swift doesn’t even need to be the one riding to get hyped: “Seeing your friend land a trick makes you so happy.” Plus nothing’s ever serious with these guys; the only business is having a good time, as Matt eloquently states: “The reactions people have, I bust out laughing. I’m trying to be serious and not fuck up filming their clip, and everyone’s running around, climbing over the rails, jumping in front of the camera, wrestling in the background of clips. It’s a circus. I just love riding with everyone.”

Beyond the next video, future is an open book for Chocolate Truck crew. More trips are a possibility, funded from video and shirt sales, as Matt is hoping: “We’d like to make it self-sustaining, trying to get some money coming in to pay for trips and traveling, so no one has to chip in money.” Five years from now, who knows? Matt assumes everyone will still be doing the same shit. Nick thinks they’ll still be filming for something, maybe Chocolate Truck 4. “I’m sure someone will have a kid and fuck it all up.” The usual laughter follows. No matter what the future brings for the Chocolate Truck crew, it’s today that matters most, and they continue to be a prime example of what a group of lifelong friends can accomplish, all based on one primary concept- fun. It’s a shining inspiration for others to follow and parallel their path of solidarity in bike riding. - RD 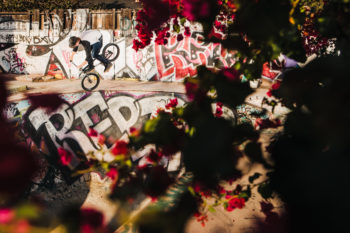 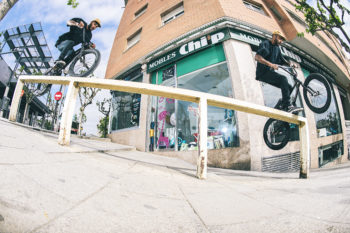 The ABC of ABD's in BCN with UTD

United hit Barcelona for their upcoming DVD and we try to figure out if it's even worth going there anymore...