12 Highlights From The 2018 Battle of Hastings

A key handful of many over a wild-ass four days of madness...

When you get together 48 of the world's most talented riders over 4 days, 3 phases of a comp, a massive subterranean indoor park, free food and beer all day long, after-parties, video premieres, awards ceremonies... there are going to be a LOT of highlights. Instead of attempting to list easily dozens of them, 12 key ones will suffice. "Without further ado..."

When it was announced that Dave Osato was coming to Hastings to rep Team Hawk, I think everyone got excited. This dude as thrown down so many wild progressive moves throughout the 90s and 00s. Tailwhip to fulanu on a sub-box (16 years ago in Hastings), what more do you need to say?

Even though his bike showed up a few days later than Dave himself, he still got some riding in, and finished off his last trick with what else but a Canadian nosepick on the sub-box. The entire building almost collapsed from the crowd roar. Dave also left with a 1000 bucks for being chosen as the Rider’s Rider; well-deserved. We need more Dave Osato appearances.

What else would you expect from Osato?

Being at Battle Of Hastings for the first time can be kind of an overwhelming experience once the contest kicks in. Not just because there’s 48 amazing bike riders all together, but the intense roar that consistently comes from the stands. It’s really, really loud. The amplified noise is thanks to the clear hard plastic zip-tied to the second story balcony railing around the full perimeter of the park that the crowd enthusiastically bangs. It’s like giving each spectator a bass drum and telling them to use it to it’s fullest anytime they feel the opportunity arises. It’s just one of those things words can’t really describe; you just need to live it.

This guy just keeps clocking those NORA Cups- two more are now added his bedroom shelf (Best Video Part, and Transition Rider). And as usual, he absolutely slayed the comp all weekend long. That double peg up the a-frame rail to whip gap during Finals was one-take casual Dennis, of course.

There was quite a mix of generations actually riding in BOH. You had the 20 year-old plaza rippers side by side with 40-something legends who rode as top talent in Backyard Jams 15 years earlier, and the respect and adulation for each and every rider was mutual. Seeing everyone as hyped to see Beringer pull a front flip fly-out as every other moment of madness during the weekend was awesome.

letting that front flip rip in front of a star-studded audience.

Corey was well into his typical high-speed flow game at the Source Park. He kept it simple in the main bowl with nothing but tables, tire slides and signature moto whips, yet it’s safe to say he rode that wooden work of art like no one else. Highest speeds, highest transfers, and insane tire slide/ bonks on the two curved wall setups that no one else dared to mess with. Corey rules.

Mid-route to back wheel-bonking the top of the wall; lunatic.

With the last year or so being more about judging comps than riding in them for Van, nor filming for any video parts, some could think Van is taking it easy in his mid 30s these days. (They obviously never ride with him). He still slips into “the zone” more often than not (as evidenced at this year's FBM DIY Worlds Slab stop, and his downside double peg grind on the curved sub this weekend). It was dope to see one of our DIG issue 90 legends Mr. Homan, collect yet another award for his legendary staus 6 years on at NORA Cup, continuing to get recognition for being the bad-ass that he is.

Homan with Old Faithful, and we love it.

Probably 95% or more of the people in attendance had never met nor seen Pennsylvania’s Mike Guth ride in person. He’s been riding homies with Joe “Butcher” Kowalski for over a decade, but has always seemed to stay below the radar, until last year’s Philadelphia Street Series Jam, where he proceeded to send some wild backwards grinds with relative ease. Then, at the first two stops of the Uncovered contest series at the beginning of the year, he turned both parks into smoldering ruins from the flames of some outrageous gap to grinds (among other moves). After securing an invite to ride on Team Qualifier after being named MVP of that series, he showed up to the Source Park and let loose an insane gap to over grind off a grind ledge. Now everyone who was there can say they too have witnessed the legend of Mad Mike in action.

Mark Burnett has been long overdue for invites to the bigger comps, and he definitely showed why he deserved to be in the mix (even if he thinks Fathead isn't funny). Local young-gun Stuart Chisholm was shinin' too.

Leave it to Mad Mike to find the most absurd gap to over grind in Hastings.

At the end of everyone's second run during Qualifying, all were encouraged to give it their all on one move, with basically no time limit. With pretty much every one of the 40 plus dudes attempting to send it, it turned into quite a long day. Some may have looked at it as a semi-low due to the excessive time taken, but, man, no one was holding back. And most dudes ended up getting their move in the bag (even if some took a while). There were countless highlights just from that aspect alone; easily one of the most stand-out ones being Gary Young's downside double-peg to wallride around the curved wall bowl corner... ??!!!!

Old dog, new trick- Tnez with a personal new one in the form of a 360 whip to fakie.

9. Cult's "It's Later Than You Think" Video Premiere

There were enough rowdy BMXers packed in a very unprepared uppity theater (much to the management's dismay) to require two showings of Cult's latest full-length effort, "It's Later Than You Think". And despite a few technical glitches, the video went off. Walsh's opening section matches up to his bowl riding at BOH (see above), and Andrew Cast, Hawk, Dak, Ricany and Dehart's sections are top notch, and Veesh effectively spliced in riding from the rest of the crew throughout the feature. DIG maestro Fred Murray also had some cracking photos on display shot on the last team filming trip in the UK. Bonus highlight- AK clips in the video, and in the flesh at the premiere!

Quite a pool of talent represented here, on many levels.

10. Best Trick At The Buzzer

Sunday's 25-minute Best Trick jam started off pretty moderately paced. Good etiquette was present, everyone was getting in their attempts, and it was pretty relaxed. Then suddenly, like a switch was flipped, the last five minutes got pretty intense. Everyone was trying to get their last licks, and the frustration was building both from not riding away from an attempt, and also the chance to get in another shot was becoming a futile effort. Yet, just as the buzzer went off, both Garrett Reynolds and Sam Jones simultaneously rode away from their moves; you couldn't even tell who was cheering for what. At the end of the day, it was Sam and his 360 over rail to toothpick that took home Best Trick; wildness.

@jam_scones_92 and myself with some last minute doubles. Battle of Hastings contest is too fun thanks @sourcebmx for an amazing weekend 🙏🏻

Justin Spriet and that butter crank-arm grind over the full length of the A-frame rail.

No cares- Jordan Godwin during the Best Trick jam.

Nothing new, or really needs an explanation. Between the outrageous plaza edit (see below), Best Trick at the buzzer (see above), and Finals pulling video game moves back to back (topped it off with a double truck to ledge smith to hard 180) , GR turned it up a notch this weekend, as usual, and the skilled greatness that burns in him delightfully blinded everyone who was fortunate enough to live it.

Not really sure how it’s possible to film all of that wizardry in the span of 60 minutes. Yeah, 60 minutes. WTF. Reynolds and Hiam; wow. 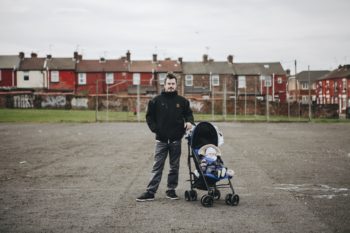 Dealing with Parenthood as a Pro Rider 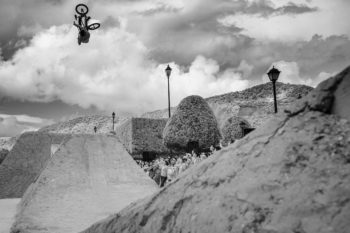 Leandro Moreira - Then And Now

10 years deep with the the South American trail boss...