Leandro Moreira - Then And Now

10 years deep with the the South American trail boss...

When I last visited Brazil in 2008, I befriended an unknown São Paulo up-and-coming rider who went by the moniker “Overall.” He had a super silky-smooth, Aitken-esque style and could send multiple combo tricks on concrete and dirt on command. We shot a few photos on his local terrain, and with the help of our mutual bilingual friend Rui Ogowa, I put together a Progress Report interview for DIG Issue 65.

Leandro's quite the world traveler these days. 2018 three-tdown across the pond in the Southern Hemisphere- Cape Town, South Africa, to be precise.

I didn’t see or hear much about Leandro for a few years. Then I started to run into him at random events in Mexico and the U.S. And the dude was straight killing it harder than ever. Now 10 years after I first witnessed his finesse on two-wheels, Leandro continues to live the trails lifestyle, building, maintaining, and slaying Caracas trails, while living a modest life of a sponsored rider and riding in international dirt and park comps. I caught up with the Brazilian-style G.O.D. recently and got a little insight into how his life is today, compared to when he was that long-haired, unknown local ripper.

Lookback on some local 'crete at San Miguel Park. 2008.

One thing that has stayed the same- daily Caracas Trails sessions. 2008.

"10 years after I first witnessed his finesse on two-wheels, Leandro continues to live the trails lifestyle, building, maintaining, and slaying Caracas trails..."

English skills: When I first met Leandro, we really couldn’t communicate with each other much at all, since my Portuguese was (and continues to be) nonexistent, and Leandro’s English ability was on par with my Portuguese. Thanks in part to his extensive traveling to the U.S. the past few years, Leandro’s English has improved quite a bit, where we can hold conversations (at least when I’m not belting out words rapid-fire), though he’ll be quick to say it’s only “so-so.” It doesn’t help that no one speaks English where he lives, though, so don’t call him a slow learner.

Caracas trails:  These days, it seems like everyone has seen those bright red-clay trails with that insanely large section where Leandro casually does the most ridiculous combos over on the regs and posts it on his Instagram feed. Caracas trails’ layout is roughly the same, though it has seen a few additions—“The big line has two more jumps. The last jump is so big; it’s so cool. The smaller line on the right has four more jumps more, with a roller and a berm. During certain times of the year, it rains every day, so we use tarps a lot more.” There are also a few more options on the region’s trails menu these days, most notably Henrique Castro’s Hero Trails.

Leandro tables in the mountains of Mexico while dreaming of Catty Woods' West Side line. 2017.

The local riding scene: The São Paulo, Brazil, metro area has had a really strong riding scene for at least a decade and a half. I witnessed it firsthand when I first visited 16 years ago. Leandro grew up there, and continues to call Latin America’s largest city home. Since 2008, Leandro has seen a shift: “There are more people riding, and now more skateparks funded by the government because BMX will be in the Olympics in 2020.” While it can be debated whether it’s good or bad that the Olympics are including freestyle in 2020 (plenty of reasons on both sides), the result of more parks to ride in Brazil and beyond is a plus, regardless.

Overall’s job situation: In 2008, Leandro was living the post-high school grad life, riding all the time and living at home, but he knew he had to get a job soon, since “Here in Brazil you can't live only riding BMX.” Well, times have changed in that regard, on many levels. Fast forward 10 years, and he’s got quite the solid sponsor list, which includes energy drinks, GT, and Profile (which he got hooked up with right after his DIG Progress Report came out). That monetary support has been enough to keep the job resumé filed away and collecting dust—“My sponsors help me out, so I can ride and chill.”

Travel: Since he had no job in ’08, Leandro wasn’t achieving Gold status with any airlines—he didn’t really travel anywhere. Thanks to the support he’s been getting the last few years, it’s enabled Overall to log some miles lately. He’s been to the U.S. and Mexico multiple times, and France, and he has plenty of other destinations on the future travel itinerary. His favorite destination so far has been the U.S. - Catty and Posh in particular. No surprise there.

One thing that hasn't stayed the same- dodging flames in Astatula, Florida during one of the wildest jams of 2018.

"Much of my daily life is the same. I still ride BMX everyday, and dig at the trails."

Friendships: One of the great things about bike riding is the long-term friendships that can come from the instant bond through riding. “I have many new friends at the trails these days. Many of my older friends are working a lot or moved away from the area.”

Relationships: It takes certain qualities in a significant other to put up with the pains of repeated injuries and perpetual long absences from traveling. Not everyone is cut out to handle all the unorthodox nonsense that comes with being in a relationship with a roaming bike rider. But it looks like Leandro found his soul mate, back before he was interviewed for his Progress Report, by the name of female fellow rider Flavia. His relationship status has remained constant all these years, but his parent status is about to change. Congrats to Leandro and Flavia on the upcoming birth of their baby boy!

Life Habits: Outside of “doing more big tricks, digging a lot more at Caracas,” life has been pretty constant for Leandro. He summed it up pretty well—“My life is the same. I ride BMX every day, dig at the trails.” Proper words from the South American trail boss.

If it wasn't for the light posts, perfectly sculpted vegetation and crowd, you'd think this was just another typical day at Caracas Trails, instead of Xicotepec, Mexico. 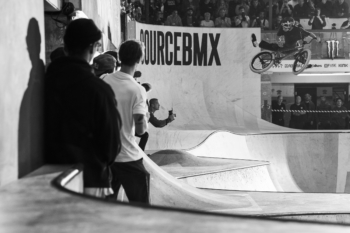 12 Highlights From The 2018 Battle of Hastings

A key handful of many over a wild-ass four days of madness... 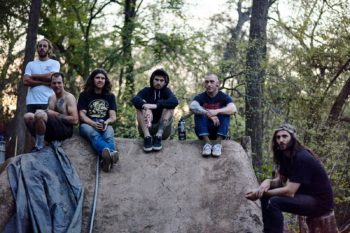 Eastside: Where the Jumps are Sick and the Locals Rip