After Effects - The Battle Of Hastings

This subterranean UK park became a sanctuary of mayhem; a fucking cocoon of chaos...

Behind every good BMX contest there is a team of dedicated people who are pouring every ounce of energy into something they believe in. The all-consuming process of organising means they probably don’t even have time to think about the effect these contests have further down the line, particularly on younger riders; many of whom are being exposed for the first time to an onslaught of energy and the most motivational of Pro level riding.

Darryl Nau's outfits were on a different level this year. On the final day it looked like a Hell's Angel had collided with MJ, plus one glove, in a head on impact.

Matt Cordova is a BMX photographer's dream. The kind of table that ruins tshirts.

They probably don’t really think about the fact they’ve forced people to leave their desks, armchairs and computer screens in order to catch up with friends, make new ones and just enjoy some social interaction to talk about what we do and why we do it. They probably don’t even realise they are laying the foundations in our history for something even bigger, which is the future of our ‘sport’ and the preservation of it’s strength. Without events like this, our history might just start running on empty.

Nobody really ever thinks like that when you are planning an event, because you just do what you do because you have an idea, and that idea becomes a reality and then you endure the hard work to make it happen, because you know it feels right. When the doors close, everyone goes home to talk about what happened and next year is already on your mind.

Dan Paley getting precise during the rail jam.

On the weekend September 9th-10th 2017, the Source Park hosted the second annual ‘Battle Of Hastings’ by inviting 44 of the most legit Pro riders in BMX today. It cooked thousands of burgers (even vegan ones) and poured countless pints of beer. This subterranean UK park became a sanctuary of mayhem; a fucking cocoon of chaos in which Hastings is, yet again, still feeling the after effects. BMX is progressing at an astonishing level but no contest on earth currently glues that wild progression together with the best aspects of our weird little world. The Battle Of Hastings a truly unique event.

Corey Walsh can flick his bike any way he wants to - even if it's two different directions in one air. Glorious.

Needing a skkkrrrrr? Matt Cordova is your man!

Chris "D-Man" Doyle scaring the hell out of the crown at the far end of the Source Park with this precision fufanu. So good you'd get his name tattoo'd on your skin.

10 Things About Our Favourite Contest Of The Year

1: Ultra-enlightened shiny stone guru Joris Coulomb airdropped a photo of Hare Krishna to Fathead which left Fathead wondering why all weekend. Why he chose him? Was he implying something? Did Fathead need help? Do we all need help?

2: Californian dream Dennis Enarson did the world’s greatest flip whip. A move that went so close to the judges’ faces that Markus Wilke had to rearrange his hair and relight his cigarette. Not sure if this is true but we heard that Joe Rich even marked him down. Just another example of how crazy shit got and how blurred memories became.

3: UK northern street mainstay, Dan Cox, made a special celebrity appearance and was found heckling BMX progression from behind his spectacles late on into the night at a well known nightclub in town. Dan’s brother Joe didn’t turn up as he is currently putting the finishing touches to Voices 3D, which is ‘apparently’ filmed entirely on an iPhone4.

4: The classic British art of Bingo was used last year to decide in what order everyone rode the contest, but this time we saw the introduction of Hook-A-Duck, with everyone’s (well a few people’s) favourite landlord. If you know hook-a-duck then imagine hook-a-duck but with beer, and riders who are not from Hastings (or even the same country) and have never even seen a plastic duck being hooked, and who also had no clue as to what was going on.

5: Another highlight of the weekend was local UK street legend, DIG Alumni, and Vegan warlord Dan Price who decided to drop the world’s longest poem on stage at this year’s first UK hosted Nora Cup. All jokes aside it was a moment to truly savour. Talking of Nora Cup speeches, did we hear a sniffle from BMX’s toughest man?

6: Professional smiler Broc Raiford went full beast mode and did things on a bike that no human should, like pegs up to hard 3 over to feeble. His ability to alley-oop out of things and somehow understand where he is going to land on his pegs is beyond our comprehension. Maybe this is the reason that he’s apparently so happy all the time?

7: This year saw a very special ‘Legends’ group invited to Battle Of Hastings and this time we don’t mean the judges. It included none other than Van Homan, Garrett Byrnes, Chris Doyle and Mike Escamilla. After attempting a crazy nosepick out of the bowl, Rooftop did the ultimate mic-drop and declared his retirement from contest riding to the crowd. Good job they didn’t qualify then…

8: Watching our ‘talk-fest for hire’ Fathead conduct his No Donuts interviews at Nora Cup was like watching Oliver Reed in the final stages of his life. A man who had been talking for hours and hours over livestream, then had to talk for hours and hours in interviews and then even present an award. Just think, he went home the next day and did a shift of window cleaning… and no doubt some more talking.

9: The usual post-contest evening entertainment was on hand with many typical BMX pastimes being enjoyed. The winner of the whole weekend had to be a certain ramp rider who thought it would be a wise move to drive around Hastings, smoking doobie sticks with a toddler-sized lump of the Devil’s lettuce in his glovebox. “Rudeboiiii”. His subsequent night in the cells was not the type of after-party he was hoping for.

10: In the contest melee, BMX’s once most hated man, BSD’s Grant Smith, spotted Chris Doyle’s name tattoo’d on a fan’s leg in the crowd. Delighted, Chris posed for a photo next to said tattoo. Unfortunately it was for a completely different Doyle and the ever mischievous Mr Smith had told a tale taller than the seat post on the bike the D-Man had borrowed to ride the contest.

Source Park local Dan Lacey (he literally lives across the street) has some moves that no one else can touch down there. This dipped three is just one of them. Bruno's face says it all.

Australia's most Australian man Jason Watts was getting original all over the place, including this nac-nac noz. 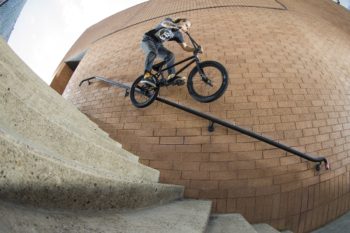 Escape To The Cinema Photo Journal

The Making Of The Mixtape 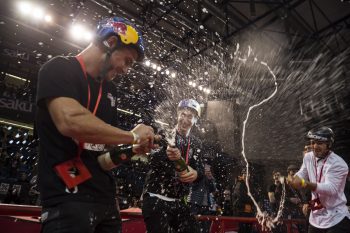