BSD Transmission - It All Started In Minneapolis

"Minneapolis is a pretty odd fucking place to go for a BMX trip..." - Reed Stark

Minneapolis is a pretty odd fucking place to go for a BMX trip. The thought passed through my mind while planning it so I’m sure the other BSD dudes were thinking it. Most people I meet abroad don’t know much more about Minnesota other than what’s shown in the movie 'Fargo'. David, Tony, and I are all from the Midwest, so we knew what to expect, but it was quite a different experience for the Europeans. This became blatantly obvious when Alex pointed at the Downtown Minneapolis skyline on his first day here and asked, “Is that Minnesota?”

I’ve lived in the state all my life and have been studying at the University of Minnesota in Minneapolis for the last four years. During my time here I’ve found a tremendous amount of untouched spots that all ended up on a list in a Word doc. The list grew as I started swapping spots with a local rollerblader. It got even longer when I got sent 2 Google Map links with over 200 ‘Urban Spots in Minnesota’ from a local skier.

Grant Smith (BSD’s main man) and I had been talking about doing a new BSD team video, but didn’t know what to do or where to go. My roommate took an internship in California for the summer opening up a room in my flat. Knowing that the weather would be ideal, I figured this would be a perfect opportunity to check some things off the list and show the BSD crew my hidden gem of a hometown.

Never heard a Stranraer accent described as charming! Kriss Kyle has that flair though.

"If things ever got sketchy, we’d just send someone with a charming European accent to woo them over."

Tour guiding isn’t easy, especially when the team you’re showing around is particular about what they want to film. Jersey, DBG, and I all ride similar spots, so showing them around wasn’t too difficult. The skiers and snowboarders I know think 20 stair rails are small, so their urban spot map helped loads with our search. Tony, Paley, Kriss, and Alex, on the other hand, were looking for spots that I’d usually cruise past without looking twice. I didn’t have nearly enough creative ability to guess what they were going to try and it was absolutely insane to see what they came up with. I’ve never managed a team or hosted anyone like this before, and it was definitely a learning experience. Wake up with the team, eat with the team, ride with the team, sesh with the team, repeat. I was with them for a month straight. It was buck. Most BSD trips end with the crew realizing they chilled a lot more than they rode. This wasn’t the case in Minneapolis. We rode nearly every day. A chill day on this trip meant we’d pack into the CRV and drive to spots instead of pedaling from the flat.

The Giraffe in his home environment.

The team was on a mission. Each rider had two weeks to film. Everyone had a list of things they wanted to do after seeing the city for a few days and I knew it was my responsibility to make sure they got a chance to send it before leaving town. I started to categorize my list of spots by the time of day we could hit and which rider was trying to touch.

Some days went off and others we pedaled home clip-less, mostly due to the University’s police force. The team quickly realized it’s difficult to get a clip when you’re grinding rails outside of a classroom where a college lecture is taking place. Whenever I ride campus, I ride alone and keep it moving. Hit a spot once and then onto the next one. Getting your name written down meant that the UMPD could arrest you for doing a bunnyhop the next time you’re cruising campus. If I ever saw a cop, I’d turn around and dip the wrong way down a one way. This isn’t exactly possible when there’s cameras, tripods, flashes, and the rider needs a good 30 minutes to pull what they’re trying. I figured all my campus spots were worthless after Paley got caught riding a rail for five minutes on the first day.

Look at the height of that ledge at the start... DBG's got that pop though. No ledge is safe.

We adapted quickly. It was crazy to see how much the crew improved at dodging security. We started to stash our bikes behind bushes, hide camera bags, and have lookouts to scream “stop!” if a cop rolled by. It worked. It actually fucking worked. All of a sudden dudes were getting in proper sessions on spots that most Minnesota locals would never even attempt to ride due to how shitty the security is. If things ever got sketchy, we’d just send someone with a charming European accent to woo them over. Clips started coming in and the team was beaming.

“BSD dudes are the best at keeping up the energy so once someone sets the tone its only a matter of time before someone else answers back with something else to get everyone freakin' out...”

I’m surprised with how much footage we collected during this month, especially considering that Jersey, Alex, and I all dealt with fucked ankles. By the end of the trip, Kriss and Dave were the only people going out to film in the sweltering Minnesota sun. It was nearly impossible to convince Kriss to hit up the Apple River rather than go riding. Thankfully he decided floating down a river getting buck on a tube would be a much more gratifying experience.

"Alex pointed at the Downtown Minneapolis skyline on his first day here and asked, 'Is that Minnesota?'"

Catch all the BSD Transmission sections in our 'related' section below 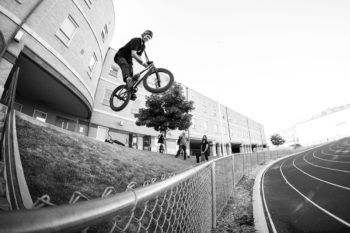 Volume 2 - Interview With The Quartet 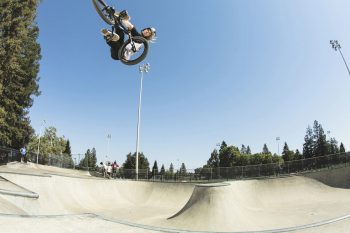 Coast'n - A Story Of Travel By Kris Fox

"It was time for a change."